The overlooked wisdom of Arab women journalists in the middle east 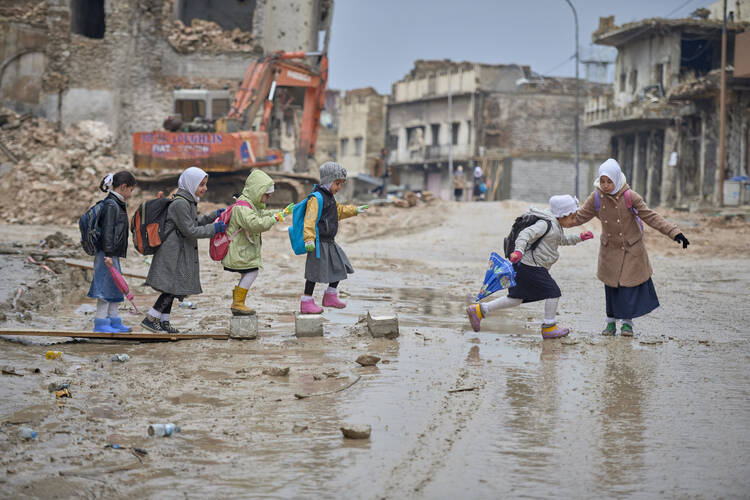 Girls navigate a muddy street Dec. 5 as they make their way to school amid the rubble of the Old City of Mosul, Iraq. When Islamic State controlled the city, most children did not attend school. (CNS photo/Paul Jeffrey)

After she repeatedly came under fire, Allam learned how to run in an abaya. “You use your left hand to hold the silky fabric under your chin to keep it in place and your right hand to hike up the bottom to free your feet. Then you run in a zigzag pattern to avoid giving a clear shot to the snipers.”

This is just one small snapshot of life in Iraq during the war, provided by one of the 19 safiyat—or women journalists—in Our Women on the Ground: Essays by Arab Women Reporting from the Arab World. Lebanese-British journalist Zahra Hankir has compiled a collection of gripping and illuminating essays by Arab women reporters who have worked in the Middle East and North Africa, with a foreword by the formidable Christiane Amanpour, CNN’s chief international anchor. Hankir’s goal was to bring attention to “underreported tales and the women who tell them.”

In her contribution to the anthology, Allam (currently a correspondent at NPR, formerly of McClatchy and Buzzfeed News) describes how in 2004, she hid with women inside the besieged Imam Ali shrine—a Shiite Muslim mosque in Najaf—during a siege that dragged on for weeks, with the bodies of local men continually being brought inside. When Allam escaped with her translator, two Iraqi women saved them and drove them to their hotel. “Every time Iraq began to unravel,” she writes, “it was women who worked the hardest to stitch it back together.”

Earlier this year, the Daily Mail published an article that pushed a familiar and misleading picture of journalists in the Arab world. “EXCLUSIVE,” the tagline read. “Tinder sex with Muslim women, tequila and drugs until dawn: My real life as a Washington Post war correspondent—and how Jeff Bezos’ paper wouldn’t pay for me to deal with my PTSD.”

The piece glorified the trope of a self-destructive, James Bond-esque white male reporter bravely traipsing into the Middle East to cover conflict, all the while cavorting with local women who are—horror!—Muslim. (A later edit, possibly due to backlash, changed “Muslim women” to “Middle Eastern women”—not that it altered the paper’s exoticization of them.) The article also completely overlooked the trauma of local people that the featured journalist was covering.

The piece bothered readers like Buzzfeed’s global director of news curation, Sara Yasin, who wrote on Twitter: “There are loads of traumatized local reporters who talk about their experiencing [sic] without degrading anyone else.”

Our Women on the Ground is proof of that. Some of the essayists talk about covering their home communities in places like Syria, Palestine, Yemen and Egypt. Others report on the home countries of their forebears or travel even farther afield across the Middle East and North Africa. But all of the writers offer careful consideration of their own relation to the people they interviewed and the context they worked in.

Israel has only one halfway house for Palestinians. Its future is in jeopardy.
Eloise Blondiau

Jane Arraf, a Palestinian-Canadian journalist at NPR who has previously worked at CNN and Al Jazeera, reflects on her time reporting on the Iraq war. She writes about finding an imam in a courtyard, surrounded by the severed limbs of people killed in a suicide bombing near the Kathimiya shrine in Baghdad. Grasping for words, she said: “I’m so sorry,” in Arabic and English. “You’re sorry?!” he replied. There was nothing to say.

This article also appeared in print, under the headline “Telling their own stories,” in the August 19, 2019, issue.

Eloise Blondiau leads the audio team at America. She produces “The Examen with Fr. James Martin,” “Inside the Vatican” and America’s podcast for young Catholics, “Jesuitical.” She is a graduate of Harvard Divinity School.