Israel has only one halfway house for Palestinians. Its future is in jeopardy. 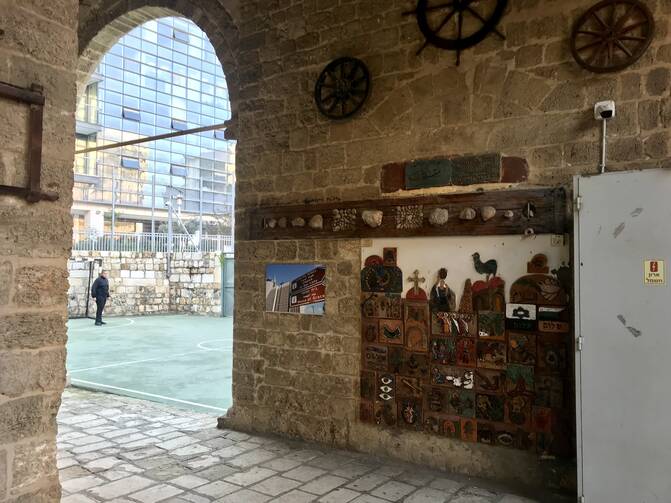 Children in the after-school program at House of Grace play on the soccer pitch next to the church in Haifa. Photo by Eloise Blondiau.

In April, hundreds of Palestinian Melkite Catholics will gather for Good Friday services at the chandelier-adorned Church of Our Lady in Haifa. They will celebrate just across the kids’ soccer pitch and the cobblestone courtyard from the residence of 15 prisoners serving the final portions of their prison sentences. Many have been convicted for serious criminal offenses like murder, arms dealing and drug trafficking.

They live in the only halfway house for Arab offenders in Israel, House of Grace. It may also be the only rehabilitation program in Israel that offers Divine Liturgy.

Salah Akoul, 53, said that without House of Grace, he would be back in prison. After spending 26 years in and out of prison for drug- and arms-trafficking offenses, Mr. Akoul has now completed his residency and is living on his own. He said that the experience changed his “primitive” way of thinking and taught him how to be part of a family. “It’s important for me to let people know that this place does really help,” he said.

Israel’s upcoming election, which takes place on April 9, is casting uncertainty over House of Grace’s future. The election may result in a new minister for Welfare and Social Services and a new head of the Prisoner Rehabilitation Authority. They could alter or decline to renew House of Grace’s annual contract, valid until the end of the year. Without House of Grace, some prisoners would be forced to serve the remainder of their sentence behind bars or in closed communities. Some might be granted early release to nonresidential alternative rehabilitation services, and that could result in a higher chance of reoffending.

This is not the first time House of Grace has faced challenges. After more than three decades of work, its prisoner rehabilitation program almost closed in 2015 when the government canceled its contract. “House of Grace is facing new struggles as we strive to continue our striving to serve the ‘least of these,’” Jamal Shehade, director of House of Grace, said at the time. After widespread outrage from community members and civic leaders, including the head of Israel’s Anti-Drug Authority’s program for Arabs, the contract was renewed.

Israel’s upcoming election on April 9 is casting uncertainty over House of Grace’s future.

House of Grace has been providing rehabilitative services for incarcerated Palestinian citizens of Israel since it was founded by Mr. Shehade’s parents, Kamil and Agnes, in the 1980s. Inspired by Jesus’ call in Matthew 25 to feed the hungry, clothe the naked and visit the prisoner, they transformed the premises of a then-abandoned church into House of Grace. Mr. Shehade grew up on the property and did not realize until much later that his “uncles” were “ex-convicts, recovering addicts and runaways.”

The program can house 15 men at a time. There are currently over 3,500 Arab citizens of Israel being held in Israel Prison Service facilities, according to the P.R.A. Arabs make up only about 20 percent of Israel’s population but approximately 40 percent of its prison population. (These statistics do not take into account about 5,000 prisoners in I.P.S. facilities from Gaza and the West Bank, according to B’Tselem, The Israeli Information Center for Human Rights in the Occupied Territories.)

“Fifteen beds are not really lot for that,” said Mr. Shehade.

Although House of Grace has a Christian mission, it is not an evangelical enterprise and its residents, like Mr. Akoul, are mostly Muslim. In the past, House of Grace served both Israeli and Arab prisoners and offered support to the local homeless population and to women. In 2011, the Israeli government stipulated that House of Grace’s residential rehabilitation program work exclusively with Arab offenders.

Although Mr. Shehade has Israeli citizenship, according to Israel’s Nation-State law, Israel is the “historic homeland of the Jewish people” and “the nation-state of the Jewish people.” These new stipulations suggest to many Palestinian citizens of Israel, whether they are Muslim or Christian, that their status is considered secondary.

House of Grace shows that Palestinian Christians in Israel have a “special role” because of their intersecting identities and in showing paths toward peace on a local level.

This puts Mr. Shehade and other Palestinian Christians living in Israel in a unique, often difficult position. “For Jews, we are Arabs; for Muslims, we are Christians; for the Arab world, we are traitors,” he said.

But Mr. Shehade says that House of Grace shows that Palestinian Christians in Israel have a “special role” because of their intersecting identities and in showing paths toward peace on a local level.

“As a Christian I have a message in this world. And that message is to be a good Christian as Jesus told us, and to serve the other—it doesn’t matter for what reason or who he is, even if he is my worst enemy and he needs support, I will try and help him,” said Mr. Shehade.

“This message is very needed in the Middle East where you have conflicts between every ethnic or religious group that you have here.”

Almost 1,000 prisoners were released early from prisons in Israel in December due to overcrowding, including those convicted of sex offenses and domestic abuse. So in some ways rehabilitation for former inmates is needed now more than ever.

Mr. Shehade said that House of Grace contributes a lot to the community, “and for that we would like also to have the support.”

“Thinking of us, praying for us, but also financial support. Because without that we cannot really exist.”

Following an interview process with the facility, residents live at House of Grace for nine months while they receive group therapy and one-on-one counseling and are accompanied by staff 24/7. House of Grace staff focus on community-building, helping residents find jobs, pay their bills and learn how to live together.

Once their nine-month stay is complete, they are required to visit House of Grace periodically over the following year, and former residents must submit to further counseling and drug-use checks. Additional programs at House of Grace include support for the families of the incarcerated and an after-school program for children in the community. These programs aim to curb recidivism by former inmates who are under pressure to provide for their families once they leave prison and to prevent children from getting involved in criminal activity as they grow up.

Since 2011, the Israeli government has contracted with House of Grace to rehabilitate Palestinian prisoners, though government funds cover less than a third of the N.G.O.’s operating costs, according to Mr. Shehade. He said that they raise the remaining money on their own, mostly through international donors.

“We’ve had a lot of disagreement with the government about financing. It’s not reasonable to raise funds from Europe or from the [United] States—or from wherever—for prisoners that the government should be taking care of,” said Mr. Sussan.

Want to discuss politics with other America readers? Join our Facebook discussion group, moderated by America’s writers and editors.

Eloise Blondiau produces "The Examen with Fr. James Martin," America's live radio show, "America This Week," on SiriusXM and America's podcast for young Catholics, "Jesuitical." She is a graduate of Harvard Divinity School.

A very interesting and heartening article. I am curious about the use of "Palestinian" to describe these people. Is Arab-Israeli, a term I'm familiar with, not seen as a positive? Just wondering.