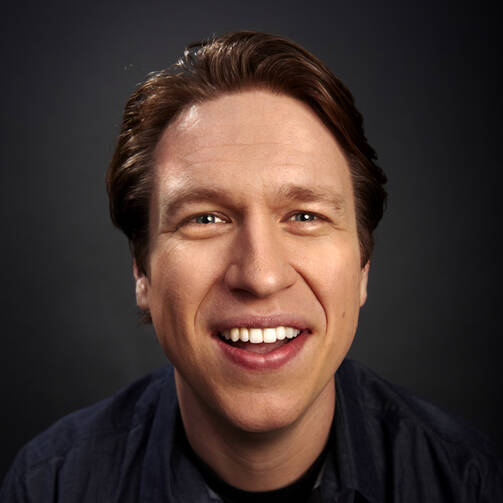 The renaissance funny-man Pete Holmes churns out breathtaking stand-up, wrote an autobiographical HBO show and hosts the popular podcast “You Made It Weird.” His work stands out easily in the crowded content field because of its electric sense of wonder. The holy curiosity that saturates his work is highly contagious.

Comedy, Sex, God is no exception. From the first pages, Holmes pulls us into the core question of his curiosity: “What is this?” What is the uncanny world—a sky of stars hanging above our heads, bodies made up of improbable cells, flowers of every color imaginable—that we all mindlessly take for granted? This unquenchable curiosity was Holmes’s primordial religion, and church was the first space he discovered that honored that curiosity.

Holmes peppers Sanskrit words throughout his memoir of spiritual awakening—his pilgrim’s progress away from fundamentalism to a more fundamental light—so I’ll offer an addition to his lexicon: adbhuta. A theater exercise called Rasa Boxes features nine different squares taped to the ground in a grid, each square containing a different Sanskrit word for an emotional state. Among them are sringara, the love a mother has for her child; bibhatsa, disgust; and adbhuta, meaning wonder, curiosity, amazement at the beauty of the world around you. From Holmes’s writing it seems he has never in his whole life left the adbhuta square.

Holmes’s memoir is poignant and heartfelt, much like his standup comedy, and reads as if the reader is third-wheeling his running conversations with the people who share in and stoke his curiosity: Ram Dass, Duncan Trussell, Kumail Nanjiani and Joseph Campbell.

Pete Holmes’s memoir is poignant and heartfelt, and reads as if we are third-wheeling his running conversations with the people who share in and stoke his curiosity: Ram Dass, Duncan Trussell, Kumail Nanjiani and Joseph Campbell.

At the heart of Holmes’s spiritual awakening is the discovery that God is mystery. The answer to “What is this?” is ultimately “luminous darkness.” Holmes discovers a new meaning to Christ’s words “Go and do likewise,” not as a moralistic command but as a call to an awakening, a conversion, the practice Catholic tradition calls the “imitation of Christ.”

“God is mystery” might be a cliché of Catholic catechesis, but Holmes, characteristically, depicts this theological truism through a fresh lens of wonder.

Richard Rohr, O.F.M., hails Holmes as a new Thomas Merton. A review of Merton’s corpus reveals stylings and concerns like Holmes’s: the false self versus the true self, contemplation, receiving reality versus grasping it through our intellect.

But Holmes’s book most reminds me of the oft-quoted dictum ascribed to Gregory of Nyssa, a theologian who describes the climax of what Holmes would call the adventure of faith as a dazzling darkness. “Concepts create idols,” writes Gregory, “only wonder understands anything.” By Gregory’s standards, Holmes, it seems, understands a great deal.

This article also appeared in print, under the headline “From Comedy to Mystery,” in the July 22, 2019, issue.