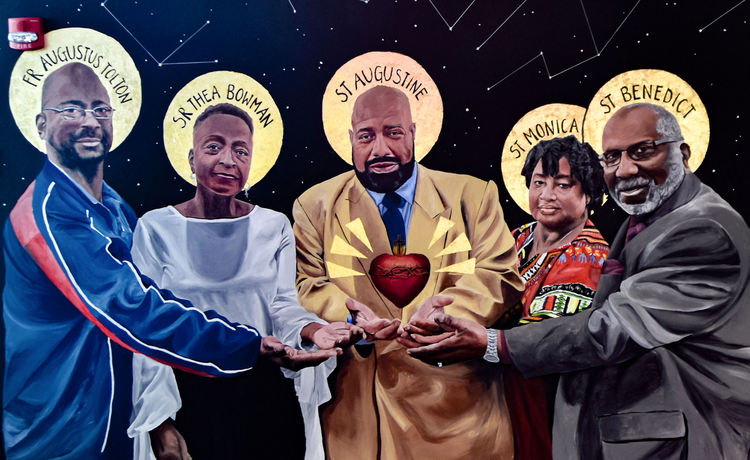 Chloe Becker was upset when she realized she could not name a single African or African-American saint. A junior at Magnificat High School in Rocky River, Ohio, Chloe was inspired to learn more about racial justice after attending a school-sponsored conference on racism. It led to the creation of a semester-long project: a mural depicting African-American saints and holy people in contemporary clothing, holding up the Sacred Heart of Jesus. Chloe took a break from her summer vacation to talk to us about using the saints to fight racism, how her community has responded and why she chose to depict the saints in contemporary dress.

In this week’s Signs of the Times, we look at two new Catholic initiatives: a Vatican podcast in Latin and a new Catholic cryptocurrency backed by former Senator Rick Santorum. We also break down the U.S. bishops’ latest protocols for holding themselves accountable for sexual abuse and its cover up. Finally, we look at a Belgian group of monks who are changing the way they sell their award-winning beer.

That’s it for us this week. Only one more show until Jesuitical goes on summer break.

As race becomes less of a problem, cries of racism become more prevalent.

Nothing wrong with the mural but the claim that racism is a problem is the real problem not racism.

Don't you think racism is a problem, a serious problem no matter how carried out -- and that the details of how severe, who engages in it, what remedies are just, etc., can reasonably be open to debate? The claim of racism might also be a problem, but surely less so than racism itself.

Is ethnic pride a problem, or "privilege"?

Less of a problem? Were you hiding under a racist rock during the Charlottesville march? Have you noticed our POTUS routinely refers to poc as rapists, murderers, and low IQ and refuses to apologize for calling for the death penalty for the Central Park Five? America is more racist than ever and the Catholic Church is just one more example. See Cardinal Burke.

Charlottesville is proof of a lack of racism! The number of neo Nazis who showed up there for a national demonstration couldn’t fill half of a junior high school gym. If that is.your example of racism then you just made my point. Thank you.

What evidence do you have that racism is a serious problem? I don’t deny that blacks have a much harder time than most but what has caused that? Is it racism? Or something else? If so how does this racism express itself?

So why is there is a serious problem in much of the black community? The answer: it’s the result of policies of the Democratic Party. Are they then the racists you are talking about?

Denying that racism is not a problem is [a part of a well funded far right propaganda campaign.

The racism in America comes from the left. It is their policies that have led to dysfunction in black communities.

Why does this article refer to the mural as one of Afro-American saints and holy people? Augustine, Monica and Benedict are not American. Tolton and Bowman are indeed Afro-American holy people, enrolled in the first official Roman Catholic Church step to canonization as saints. And so are other African Americans: Henriette Delille, pierre Toussaint, Marie Lange, Julia Greely. I suspect all ofvtherm have been stalled on the way to canonization by a lack of the huge sums of money needed to buy sainthood at the Vatican. You can learn mote about all of them at the web page of The National Black Catholic Congress.

Great suggestion. Yes, the subject area has been fairly well covered, and it should garner wider exposure. We need to remember this is a high school student's first foray into this subject area. Great job from an artistic technical perspective, but the real subject is even more interesting. But good start, as I'm sure you and most would agree.

When I was a kid my extraordinarily devout Irish-Catholic father told me that racism was the number one problem in America. The situation has not changed, only expanded to include new arrivals to our country. I pray that the particularly vile climate today will finally force the pendulum to start swinging in the opposite direction.

I thought St Augustine was a black African, no? I don't think there is a conspiracy to bypass poc as candidates for sainthood (think of St Martin de Porres, for instance)--don't forget that many African-Americans belong to Baptist churches which have no tradition of canonisation or sainthood.
RCC has for centuries been western and european, which are mostly white, but the litany of saints is not racist. Perhaps this young lady needs a better education than what she seems to be getting in Ohio.

Extolling the virtues of one's own people is terrific. Journalists don't always write their own "headlines" - and I don't know who wrote this one, but a lot of people are tired of the Catholic SJW take on "racism." Like per this headline.

The mural is fine, though the racial archtypes employed here are not so, (do we dare point out), historically speaking, "dead on." That's another topic, and not really worth going into, it's really not the point anyway.

Too often, today's social commentary, whether through art or otherwise, amounts to not much more than a misdirected virtue signal. It's more reactionary that reflective, especially concerning the true reality, which is too often just not a consideration, as if it is of no import.

The Catholic Church may have had its' "bad days" regarding race, but now the idea is flipped. The Catholic Church - at least in our big cities, is - and has been for a few decades - one big melting pot, a shining light on a hill regarding various ethnic and racial groups "getting along." Younger people who don't have any sense of recent history are seemingly impressed with themselves that they can "call out" racism as a "major problem" in the RCC... well, that may sell books and speaking engagements but it's really a distortion of reality, (yes, one can always find some exceptions, of that we are all aware, or should be) just a lot of privileged libs extolling their "sensitivity" and "depth" and "woke-ness."

Get over yourselves. Go out and live and then get back to us.

Black Saints - they all have an exemplary record in the field of evangelization.