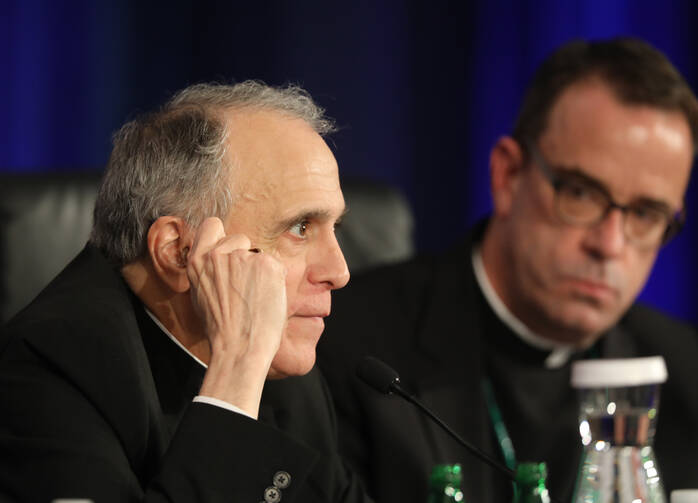 Cardinal Daniel N. DiNardo of Galveston-Houston, president of the U.S. Conference of Catholic Bishops, looks on at the conclusion of the second day of the spring general assembly of the USCCB in Baltimore June 12, 2019. (CNS photo/Bob Roller)

U.S. Catholic bishops voted overwhelmingly in Baltimore on Thursday to adopt new protocols aimed at holding themselves accountable for committing sexual abuse themselves and for mishandling accusations of abuse made known to them. While the new protocols are designed to include laypeople at every stage of an investigation—they advise that bishops “should” include laypeople by way of an office in their chanceries—lay reform groups and victim advocates say they are unsatisfied, as the new rules stop just short of requiring such involvement.

In response to a new Vatican law enacted in June, detailed in the motu proprio“Vos estis lux mundi,” which requires bishops around the world to create structures aimed at bishop accountability, the U.S. Conference of Catholic Bishops voted to create a third-party reporting hotline; to adopt a procedure for receiving those complaints and include laypeople to investigate them; and to compile into one place existing measures that restrict the public ministry of retired bishops who leave office “for grave reason.” Bishops also approved a code of conduct that they say binds them to the Charter for the Protection of Children and Young People.

According to one new protocol, a metropolitan bishop, who oversees bishops in a geographic area, “should” appoint “a qualified lay person to receive reports” from the hotline about misconduct by a bishop. If the report is deemed credible and if the Vatican orders an investigation into a bishop, the metropolitan “should appoint an investigator chosen from among the lay persons previously identified by the province.” Additionally, the metropolitan bishop “should also make use of qualified experts” who are “chosen predominantly from among lay persons.”

According to one new protocol, a metropolitan bishop “should” appoint “a qualified lay person to receive reports” from the hotline about misconduct by a bishop.

Cardinal Blase Cupich, the archbishop of Chicago and an adviser to Pope Francis who participated in the February meeting at the Vatican of bishops from around the world to discuss sex abuse, drafted the amendment that strengthened the language about including laypeople in investigations. But because the Vatican’s own law stops short of mandating lay involvement—though it does say laypeople can be involved—some U.S. bishops said they could not require lay involvement. Many bishops pointed out that they already rely on lay expertise for assistance in many areas and that it would be highly unlikely to to conduct an investigation without laypeople.

The measure passed by a vote of 218 to 1, with two bishops abstaining.

Kim Smolik, the chief executive officer of the lay reform group Leadership Roundtable, said she was “pleased that multiple bishops requested to specify lay involvement in the documents” but that the organization was “disappointed” such involvement was not mandated. She said that while the Vatican’s law does not require lay involvement, it was “an open door for each region of the world to be able to enact and involve the laity at the level which they felt was necessary.”

“The motu proprio is a floor, not a ceiling,” Kim Smolik said. “We hoped the bishops would treat it that way and require an institutionalized lay involvement.”

“The motu proprio is a floor, not a ceiling,” Ms. Smolik said. “We hoped the bishops would treat it that way and require an institutionalized lay involvement.” She added that her organization, which has hosted recent meetings with top church leaders on the issue of accountability, hopes bishops will enact an auditing procedure to measure the implementation of the new rules and address the “root causes” of what she called a “leadership crisis.”

The victim advocacy group Survivors Network of those Abused by Priests said in a statement that without mandating lay involvement and requiring that all allegations of abuse or mismanagement be reported to civil authorities, the new protocols lack bite.

“Without these mandates, there is no guarantee that reports will be routed to police and investigations will be transparent and public. Instead, all reports can remain secret and insulated within the church’s internal systems,” the statement said.

According to the new rules, the metropolitan bishops are required to report allegations of criminal conduct to civil authorities as required by laws in their jurisdictions.

Bishop Shawn McKnight told the assembly he believed lay involvement should be mandatory. “I believe we should do that because it’s the Catholic thing to do,” he said.

In a press release issued Thursday, the U.S.C.C.B. urged victims of abuse not to wait until the implementation of the reporting system before making their claims known.

“Individuals who may have been abused should contact local civil authorities to file a report as soon as possible, and may also report to Church authorities by existing means, such as Victims’ Assistance Coordinators,” the statement said. “After reporting to civil authorities, individuals can also register a complaint with the metropolitan for issues related to sexual abuse or an abuse of power.”

[What do you think about the bishops’ response to sexual abuse? Let us know in our short reader survey]

Bishops rejected a proposed amendment made by Bishop Jaime Soto of Sacramento that would have required an “independent, transparent” audit of the new protocols after a three-year trial period. The committee charged with drafting the proposal said the amendment’s intent was “worthy” but said it is “outside the scope” of the Vatican’s new rule. In discussions about the amendment, some bishops expressed concern that without an audit, it would be unclear how the three-year trial period fared.

In a 212-to-4 vote, with one bishop abstaining, bishops adopted a policy giving them the ability to restrict the ministry of retired bishops who left office “for grave cause.”

Bishop Shawn McKnight, the head of the Diocese of Jefferson City, Mo., told the assembly he believed lay involvement should be “mandatory.”

“I believe we should do that because it’s the Catholic thing to do,” he said. Many bishops applauded in response.

Bishops adopted the protocol during a special meeting—normally the bishops gather for a retreat in June—after efforts to vote on accountability measures were delayed in November at the request of Vatican officials until after the global meeting of bishops in February.

Another protocol enumerates existing restrictions that a bishop can place on an emeritus bishop who leaves his office because of abuse or allegations of mismanagement.

In a 212-to-4 vote, with one bishop abstaining, bishops adopted a policy giving them the ability to restrict the ministry of retired bishops who left office “for grave cause.”

The measures are “non-penal restrictions” because only the pope can “impose penalties on bishops who have committed offensive acts,” a document from the U.S.C.C.B. explains. But bishops can place some restrictions on other bishops and the new protocols aim at taking action to limit the public presence of a disgraced prelate.

This survivor thinks the Bishops got it absolutely right on Commitment #1: To reach out to Clergy Abuse Survivors and their families, helping them find healing and care. This is a radical departure from anything that has come before. They put Survivors first...#1. Of course, the devil’s in the details, but I feel they have their priorities correct now. It all starts with placing Survivors and our families ahead of all other concerns. Numero Uno. If this is consistently done from today forward I would try my best to muster the courage to walk into a Catholic Church again after a 49-year absence. Wouldn’t that be something!

please name any other organisation whose leaders-- after committing crimes--get to draft the rules that will govern their behavior in the future?

A Grady
3 years 5 months ago

The "must" is missing because old celibate men have only power and gossip for their pleasures.

Who were the ‘no’ votes?

I also want the no votes to be identified on both questions.

Sexual abuse and covering up abuse are crimes. Why aren’t they treated like crimes? The District Attorney of each area where there was abuse should be prosecuting these cases. The bishops should turn over all the information they have about abuse to the District Attorney’s office.

Why is this even an issue?

Sexual abuse and covering up abuse are crimes. Why aren’t they treated like crimes? The District Attorney of each area where there was abuse should be prosecuting these cases. The bishops should turn over all the information they have about abuse to the District Attorney’s office.

Why is this even an issue?

This is absurd.
These are crimes and need to be reported to law enforcement!
Church authorities are required to assist in any investigation--by law, not by suggestion of themselves!
Committing an act of sexual assault and obstructing justice need to be treated like the FELONIES they are. Putting convicted priests and bishops in prison is what needs to happen. Yesterday!

As far as the actual acts of sexual abuse, while I am in complete agreement with the obvious move, report the event to law enforcement personally or through your own lawyer is the gold standard theoretically, the devil is in the detail.

It remains an absolute right of each person abused to choose to take the route of civil and criminal law authorities being involved.
That means, choice must be given to an abused person for their experience not to be exposed the glare of publicity and public knowledge and the harrowing experience of being the witness at a trial.
This is particularly important as the conviction rate in the courts of the first world for sexual abusers is in the single digits.

It is a much more vexed question about what to do with Superiors and Abbots and Bishops who have already perverted the course of justice.
Ecclesiastical court involvement?

How much longer will the fox be allowed to guard the hen house?! It is time that the gifts of lay people be incorporated into this oversight. For decades now the bishops and clergy have shown themselves unable to do the just thing.

A Grady
3 years 5 months ago

Craig B. Mckee
3 years 5 months ago

Poor old white guys just don't get it...and they probably won't until one of them is locked up!
http://www.usccb.org/about/leadership/usccb-general-assembly/index.cfm
Di Nardo, resign now!

Craig B. Mckee
3 years 5 months ago

Airplane reading for their long ride home from Baltimore...
The new party line has just been issued in a MEMO from Monsignor Bransfield.
Hope somebody at America has gotten to see it: all THIRTY QUESTIONS and the answers provided.