Review: Psst! We are all conspiracy theorists. 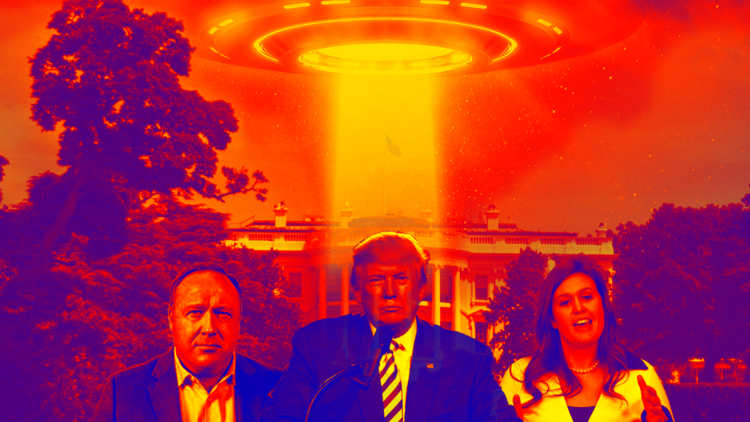 “While conspiracy theories are as old as the country itself,” writes the journalist Anna Merlan in her new book Republic of Lies, “there is something new at work: people who peddle lies and half-truths have come to prominence, fame, and power as never before.” They sit atop social-media perches and traverse the halls of 1600 Pennsylvania Avenue. Their influence wafts through the internet like a contagion through air vents. Before YouTube suspended his account last August, Jones counted 2.4 million subscribers. President Trump, a noted conspiracy theorist, commands an audience of nearly 60 million followers on Twitter (it is hard to know how many are bots).

Cataloging the president’s bouts of magical thinking is like counting a stampede of antelope. Trump said former President Obama wiretapped Trump Tower in Manhattan. He said Obama was born in Kenya. He tied Ted Cruz’s father to the John F. Kennedy assassination, insinuated that Bill Clinton and Joe Scarborough have killed former aides and interns, and accused Democrats of inflating the Hurricane Maria death toll. In 2017 he formed a voter fraud commission, headed by Vice President Michael R. Pence, to investigate the baseless claim that millions of people voted illegally in the 2016 election. (The commission disbanded in 2018 after finding no evidence of such fraud.)

In 2019, fabrications and phantasms are legion, hole-punching your brain until it feels like Swiss cheese.

In 2019, fabrications and phantasms are legion, hole-punching your brain until it feels like Swiss cheese. A book by QAnon, a right-wing conspiracy group, recently appeared on the Amazon bestseller list. (The book claims that Democrats run a trafficking ring and drink children’s blood.) Merlan dives right into these cesspools, interviewing conspiracy theorists on cruises to Mexico, at conventions in Los Angeles and Kentucky, and across the street from the White House in Lafayette Square. She writes with such acuity that I could not stop reading: Each page pops with bizarro details and characters.

Supreme among the conspiracy theorists profiled here is the aforementioned Alex Jones, who has claimed that domestic terror attacks like the Oklahoma City bombing, the Boston Marathon bombing and the Sandy Hook massacre were government-sanctioned hoaxes, or “false flags.” (In February 2019, Jones was deposed in a defamation lawsuit brought against him by the Sandy Hook families.) These denials stem from a conviction that the attacks were “part of a string of assaults on right-wing patriot groups and had been staged to justify further crackdown on those groups.” Merlan writes that some conspiracists thought the suicide bombing at an Ariana Grande concert in Manchester, U.K., was a “false flag” planted by liberals to distract from the death of Democratic National Committee staffer Seth Rich.

In his seminal 1964 essay “The Paranoid Style in American Politics,” the historian Richard Hofstadter wrote that “the modern right wing...feels dispossessed: America has been largely taken away from them and their kind, though they are determined to try to repossess it and to prevent the final destructive act of subversion.” In Republic of Lies, the outlandishness of conspiratorial thinking belies the “petri dish” of an enfeebled social safety net, class immobility and racism: In Merlan’s words, “the fear of losing one’s place on a narrow ledge to someone seen as inferior.”

But paranoia is not always partisan, or even rooted in class. Merlan points to wealthy progressives like Robert De Niro and Robert F. Kennedy, Jr., who have aligned with the anti-vaccine movement. “To go truly viral,” Merlan writes, “conspiracies need a famous name or a big media outlet as an accelerant, the connective tissue that connects the fringe with the power players.” When Seth Rich died, WikiLeaks agitator Julian Assange gave an interview to a Dutch TV station in which he hinted that Rich was a WikiLeaks informant. Theories proliferated online, implicating prominent Democrats like the Clintons.

But paranoia is not always partisan, or even rooted in class.

Rod Wheeler, a private investigator who appeared on a D.C. Fox affiliate to discuss Rich’s death, later said that “the White House had encouraged him to push the Seth Rich conspiracy theories to draw attention away from the administration’s alleged Russian collusion.”

Particularly distinct from the Trumpian brand of reactionary conspiracism are the suspicions minority communities harbor about their government. As a recent exhibition at the Met Breuer in New York showed, the government—often inclined toward opacity and poltroonery—has conspired against people of color, particularly African-Americans. Any account of conspiracism is incomplete without this history; Merlan devotes an illuminating chapter, called “None of it Is Crazy,” to the subject.

In the 1960s and ’70s, she writes, the F.B.I. targeted civil-rights leaders, at one point sending Martin Luther King, Jr., an anonymous letter urging him to commit suicide. In 2015, the agency surveilled Black Lives Matter protests using “secret spy planes.” Beginning in the 1930s, the government knowingly withheld medical treatment from black men as part of a 40-year syphilis study. Under Trump, the Department of Homeland Security “gutted funding for Countering Violent Extremism, an Obama-era program that devoted resources to organizations that fight white supremacist groups.”

This history of sabotage has produced its own paranoia. Merlan writes of a New Orleans community activist who testified before Congress that someone had “bombed the walls of the levee” during Hurricane Katrina. The rapper Snoop Dogg said this of flu shots: “I think they’re shooting some control in you.”

“A weird thing about being black,” the journalist Michael Harriot tells Merlan, “is that some of it is true and some of it is not. But none of it is crazy.”

“A weird thing about being black,” the journalist Michael Harriot tells Merlan, “is that some of it is true and some of it is not. But none of it is crazy.”

To some extent, this is Merlan’s point. Crazy is relative. Conspiracies do happen. The Supreme Court swung a presidential election in 2000. The George W. Bush administration invaded Iraq under false pretenses. Russia circulated political ads on Facebook in 2016. Wells Fargo employees embezzled millions of dollars from unknowing clients. So long as the powerful—and the institutions they populate—lie and hoodwink, exploit and cut corners, people will be suspicious of them.

But another question of the Trump presidency—one I’ve been preoccupied with—is: Do powerful people like Trump and Jones really believe the invective they’re churning out? Yes? No? Probably? Are they just trying to maintain their empires and hawk merchandise? Am I a conspiracy theorist about conspiracy theorists?

Regardless, Merlan writes, these powerful peddlers are above all self-serving. In the closing lines of the book, Rush Limbaugh rails against the “climate change agenda,” saying news coverage of impending Hurricane Irma is overblown, a liberal plot designed to stoke panic. A couple of days later he “evacuated Florida, steering himself out of the path of the fake storm.”