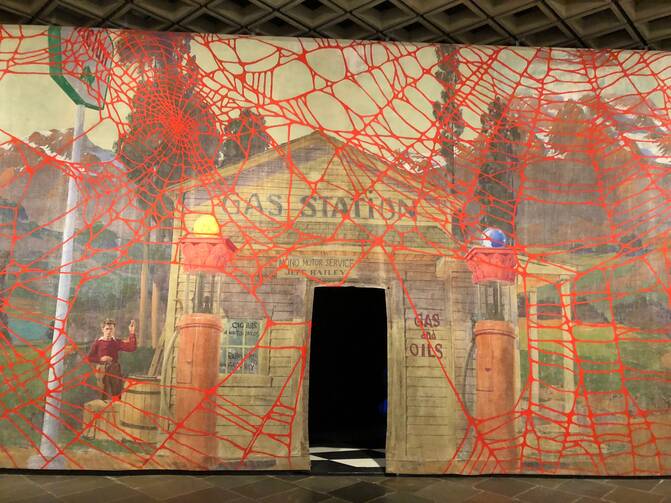 “Make sure you check out the gas station,” a friend had told me. “There are all these Snow White dwarves inside. And a crystal ball.”

The exhibition “Everything Is Connected: Art and Conspiracy,” a jigsaw puzzle of U.F.O.s and humanoid lizards, C.I.A. black sites and Zapruder film stills, is on display at the Met Breuer in New York until Jan. 6, 2019.

Walking around, listening to the “bump-in-the-night” music, looking at the art—inspired by both conspiracy theories and true events—two thoughts come to mind: first, the U.S. government lies. Second, a bleak alchemy is and always has been at work in the United States, binding these documented whoppers to a wider, wilder paranoia, the cuckoo-bird zealotry of people who trust no one and want answers.

Two big portraits (acrylic on canvas), by Wayne Gonzales, greet visitors as they step off the elevator. On the left is Lee Harvey Oswald, the assassin of President John F. Kennedy; on the right, Jack Ruby, the club owner who killed Oswald as officers escorted him out of police headquarters in Dallas, Tex. Oswald’s portrait is amoxicillin-pink, and Ruby’s is Sour Patch Kids green. Both look like Saturday morning cartoons. They are the ringmaster and lion tamer, the two headlining curiosities of this freaky county fair.

A bleak alchemy is and always has been at work in the United States, binding documented whoppers to a wider, wilder paranoia.

The portraits bring to mind the numerous conspiracy theories that the Kennedy assassination spawned. Why did Ruby kill Oswald? Why did Oswald kill Kennedy? Who is telling the truth? Who has enough skin in the game to lie? How could something so momentous have no satisfying explanation?

A focal point of “Everything Is Connected” is an installation featuring a gas station painted on a large panel, the kind a high school or college theater department might use in a production of “To Kill a Mockingbird” or “The Last Picture Show.” The panel also features a creepy teenager who stands next to the gas station and leers. Drawn over the image of the gas station is a crude red web that suggests decay. But there is more to the artwork: A cut-out rectangle in the panel serves as an entrance through which you can walk into a room that is hidden behind it.

I walked inside and, in the dark, saw three person-sized gnomes, who looked as though they had been lifted from “Snow White.” They crouched in a semicircle, their faces brightened by the green glow of some orb or rock in front of them. Framed on either side by tall crystals, they evoked imperial Russia in the early 20th century: war, unrest, superstition. Tsarina Alexandra bringing the mystic Grigori Rasputin to court. The drama of imminent decline. The American artist Jim Shaw made the entire gas station piece, entitled “The Miracle of Compound Interest,” in 2006. He says it is a comment on neoliberal capitalism and the demise of the New Deal.

Such allegorical critiques are tempered by real-life examples of malfeasance. Throughout the exhibition, the C.I.A. is a main character. One of my favorite pieces is a stylish ink drawing by Raymond Pettibon. It shows a government official in a black suit and midcentury sunglasses. His arms are at his sides, and his face is folded into a very slight snarl. A tiny comic book caption in the bottom right corner of the illustration reads, “Coup d’etats were very much in vogue.”

While the artists’ subject matter stretches from the 1960s to the present, it was the little pockets of recent history that caught my eye. Some pieces spotlight the conflicts in the Middle East, which have mutated and persist today but garnered more coverage in the 2000s than in this decade. An untitled 2006 illustration (acrylic and colored pencil on paper) takes as its inspiration ’50s B movies. It shows a spongy brain, wearing a Nazi cap, shooting out of a toilet bowl. A text bubble (shaped like Oklahoma) declares, “Hitler’s Brain Is Alive.” The artist, Peter Saul, meant the piece as a response to the abuse perpetrated by U.S. troops at Abu Ghraib.

Trevor Paglen’s 2006 photo of a C.I.A. black site does not shock or pack a punch. It looks all-American. It could be the theatrical backdrop for a play called “Apple Pie and Ennui,” featuring sock hops and jukeboxes, reality TV and Hummers and dreary pop-punk ballads. And it reminds me of my childhood in the 2000s, when public outrage burned, then festered, over the Bush administration’s lies and obfuscations about the war in Iraq. I remember that color palette from TV and magazines and the internet—the endless tracts of desert, the Baghdad cityscape, the dusty camouflage uniforms. The storefronts and destroyed homes. There were no garden gnomes or glowing rocks. There were no answers, in fact. All we had was our wonderment at the senselessness.