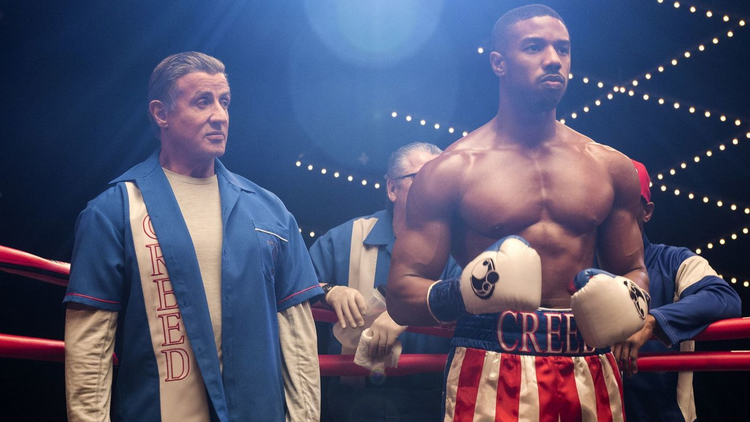 With a focus sharp as a beam of light, Adonis Creed (Michael B. Jordan) is after something intangible. Is it glory, pride, rapture? He breathes in and out and punches the bag and screams. He and his coach, Rocky Balboa (Sylvester Stallone), spend a lot of “Creed II” puzzling through this fight that has no name. On the other side of the struggle waits the ineffable rush that flows from a hard-won victory, the thrill of doing something big, testing your apparent limits, reveling in your success. Driven to excel, Adonis puts himself through the wringer, bloodying his body and sullying his psyche—and for what? For whom?

The sequel to the 2015 film “Creed” follows Adonis’s boxing career as he assumes several new mantles: heavyweight champion of the world, father, inexhaustible avenger. Right after Adonis wins the heavyweight title, a Russian boxer named Viktor Drago challenges him to a fight. Viktor’s father, Ivan Drago, killed Adonis’s father, Apollo Creed—Rocky’s arch-rival in the “Rocky” movies of the 1970s and ’80s—in the ring in 1985’s “Rocky IV.” “It all feels so Shakespearean,” says a boxing commentator. Fights are about narrative-building, says Buddy Marcelle, a promoter who amps up the tension with his public appearances and media baiting.

Driven to excel, Adonis puts himself through the ringer, bloodying his body and sullying his psyche—and for what?

At a meeting in an Italian restaurant decked out in red-and-white-check tablecloths, Ivan Drago, who looks like a cross between Steve Kerr and Vladimir Putin, snarls at Rocky, a former opponent. They talk trash, and Ivan reiterates the challenge. But “Creed II” is less about petty grievances than doing right by your forebears. When Adonis watches a YouTube video of his dad’s death, you can see something snap in him, some giant psychological tendon. Even though Rocky wants him to forget about “what happened a long time ago” and “let it go,” Adonis has to accept this fight.

It is a personal calling, an old blood feud, but there is something else here, too. Maybe I am just prone to political metaphors, but as I watched, 1985 was never far from my mind. Today, the sight of a Russian clobbering an American does not conjure up Cold War frost but the troublingly absurd current of decay that runs through our body politic. You cannot escape the past. You cannot will the end of history. And so it seems that maybe our parents’ wars do belong to us after all. We are not as enlightened and wide-eyed—barreling toward the future with a smirk—as we once thought we could be, arbiters of the post-Soviet world. The shimmer of liberal democracy has been tarnished with grit and grime, dulled by wear and tear. We are stuck in the ring, brawling in our stars-and-stripes shorts, falling over—K.O.

The fights are wild. Even the pacifists in the audience might lean forward in their red velvet seats, hands clasped, mouths contorted into wiggling O’s, cheering Adonis on. The sounds are sharp and crunchy, the lights bright and harsh. In the crowd, a lady in glasses aims her phone at the ring to take a video. Ouch, wow, oooooh, whoa. No, no, stay down! (Get up!) Stay. Down! (GET. UP!)

Rivalry, provocation, battle royale—the fight is like a Jungian archetype, luring you in with familiarity, stirring in you a hunger for triumph. It forms another set of enduring tropes in our imagination: hard work, the treacherous climb, reaching the top of the mountain and taking in the vista. And when the spoils go beyond the belt, the HBO special, the money—when the real trophy is rooted in some unnameable hope or glory or joy, that is when it gets real. That is when something clicks, and you, the viewer, recognize the elation and walk along the surface of cloud nine right beside the victor.

“You wouldn’t be any good to anybody if you didn’t do what you love,” Adonis says, suggesting that this is his passion, his vocation, that he is good at boxing and feels great when he succeeds. Throughout the film, he says he accepted the challenge “because it was my fight.” Later, he visits his father’s grave with his new baby daughter. That is what I kept going back to, days after I watched “Creed II”: how woundedness, when mixed with enough pluck, sometimes fuels greatness, and how it is odd that such sadness, disappointment and loss change something, rewire you. And how it takes your breath away to see that transfiguration take place, the dissolution of darkness into bright light.

I will watch this movie as soon as possible. I just love this genre. Have you seen this https://eduessayhelper.org/blog/college-application-essay page before? I've heard a lot about this service.

This creeds || is the most awaited thing my list and am waiting for it dives in my morph tv app so that i can enjoy it with my family also.