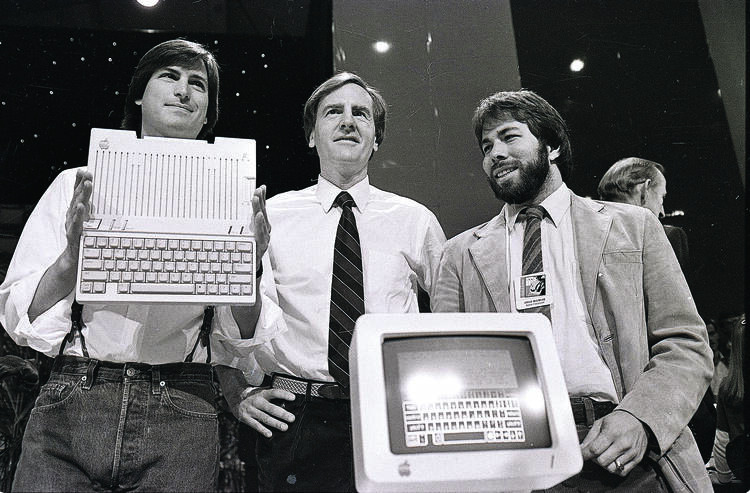 In the 1960s, Silicon Valley was Stanford University surrounded by rolling orchards and factories making military technology, with some exceptions: Around Del Monte’s cannery, the air smelled like fruit cocktail. Then, in 1971, a computer scientist named Nolan Bushnell, inspired by the “video games” scientists were toying around with in labs, decided to compose one for the masses. He called it Computer Space.

“We had to take the TV apart,” he says in Adam Fisher’s oral history, Valley of Genius: The Uncensored History of Silicon Valley (As Told by the Hackers, Founders, and Freaks Who Made It Boom). “I built a little circuit that would bring up the stars, I built a little circuit that would put the score up.” When it worked, “the first time we had a little rocket ship going, flying on the screen, it was just one of those wow-we-thought-we-could-do-this-and-now-we-did-it moments,” he says.

Those remarkable mechanical epiphanies set the pace of Mr. Fisher’s fascinating, fun and witty 494-page account of the greatest revolution since the industrial, compiled from over 200 interviews. The author a veteran tech journalist, said in an interview with America that he set out to tell the “cultural and technical story” of the tech revolution as it happened on the peninsula south of San Francisco. “The mainstream media likes to tell the money story.”

“How much was the direction of the internet influenced by the perspective of nineteen-, twenty-, twenty-one-year-old well-off white boys? That’s a real question that sociologists will be studying forever.”

His tale focuses instead on the engineering and cultural roots of the Silicon Valley story, and it is a dive into this strange fact about modern life: We have, en masse, adopted the dreams, tools and reading habits of California tech hippies shaped by Buddhism, marijuana, LSD and anarchist and libertarian beliefs, colored by hedonism and incarnated in an annual desert bacchanal called Burning Man. In fact, Mr. Fisher, who grew up in Silicon Valley playing video games in the 1980s, says he knows “more Buddhists than Catholics, and I’m talking about middle-aged white men.”

The question of how Silicon Valley has shaped us is a subject for another book. Or, as Ezra Callahan, an early Facebook employee, puts it in this one: “How much was the direction of the internet influenced by the perspective of nineteen-, twenty-, twenty-one-year-old well-off white boys? That’s a real question that sociologists will be studying forever.”

Valley of Genius chronicles the genesis and sometimes fall of every Silicon Valley giant, including Apple, Pixar, eBay, Netscape, Facebook and Twitter; the invention of key technologies, like virtual reality, the smartphone, virtual maps and social networks; and the development of cultural institutions around the industry, like magazines, networks and festivals. Non-Silicon Valley companies like IBM and Microsoft have small roles as villains. Along the way, a region boomed, transformed into an office park dripping with venture capital money and became a symbol of a culture that has consumed the world.

There are surprises. Spun out from Apple, a company called General Magic developed the first smartphone in the early 1990s but failed to commercialize it. “One of the great Silicon Valley failure modes is ‘right idea—way too early,’” says John Giannandrea, an engineer who now works at Apple.

In Fisher’s telling, none of this would have happened without the video game craze. In the early 1970s, Bushnell took the $3.5 million he earned on Computer Space and started Atari, named after a term from the game Go, which he liked to play at the San Francisco Go Club. One of the company’s first inventions was Pong. The bare-bones version of Ping-Pong became a sensation, turning the game console into a household staple. “If you were a geeky teenaged guy in that period of time, you were blowing your lawn-mowing money on Atari,” says the writer David Kushner.

“Ready or not, computers are coming to the people,” wrote Stewart Brand in Rolling Stone in 1972. “That’s good news, maybe the best since psychedelics.”

Atari “joined the computer and the video game at the hip,” says Fisher. He speculates that the primacy of video games in the industry’s beginnings might be a reason that the industry is still so male-dominated. Atari became the tech monster of its day, gobbling up top engineers, launching hit games and grossing billions. Bushnell led a clique of rebelliously minded entrepreneurs who mixed tinkering with machines with smoking pot and dropping acid. He “was the Merry Prankster of Silicon Valley, so he attracted all the other Merry Pranksters who had nowhere else to go,” says Kushner.

It wasn’t all hippies. Xerox built a lab and developed arguably the world’s first personal computer. “It was almost a free ride, because so many things were just ready to be invented,” says Dan Ingalls, who worked at Xerox and later Google. “Ready or not, computers are coming to the people,” wrote Stewart Brand in Rolling Stone in 1972. “That’s good news, maybe the best since psychedelics.”

A college dropout and committed Buddhist spiritual seeker named Steve Jobs was Atari employee number 40. One of his first tasks was to teach everybody how to solder. From the beginning, Jobs was an oddball. “He had this weird diet,” says Al Alcorn, Atari’s first engineer. ‘He would pass out occasionally. And he said, ‘Don’t call 911 if I pass out. Just push me under the table.’ Oh, Okay.”

Atari crashed in 1984, after making an ill-timed bet on making a video game version of the movie “E.T.” It paid Steven Spielberg over $20 million for the licensing rights and then rushed out a game to have it ready for Christmas. The game flopped. Atari had made almost five million cartridges, and sold only a couple of million. It buried many of the rest in a landfill.

By then, Jobs had already left Atari to start a new company. “It was apple harvest time,” says Don Kottke, an early colleague. “We were fasting on apples. It was our fruitarian experiment. And that’s why the name Apple was in the air.” The Apple I was a primitive device, made from Atari parts, but the Apple II, which had a spreadsheet app and a word processor, sold 10 million units.

“The Apple II was the first time that computers went really mass market,” says the writer Clive Thompson. “That’s what happened to the car in the fifties and sixties; it was the computer in the late seventies and eighties—and the Apple II was the vanguard machine.”

Silicon Valley had made the machines. Now it needed to connect them. In the early 1990s, the internet was still mostly the province of San Francisco tech geeks. The internet became accessible to the rest of us when Netscape invented the first workable browser. Its lucrative initial public offering in 1995 launched the tech boom, attracting waves of new entrepreneurs and investors and people Fisher calls “sociopaths with M.B.A.s.”

What followed, including the rise of Google, Facebook and Twitter, and the coming of the pocket phone-TV-radio super machine that can look up your high school crush, order a pizza and shoot movies, is a better-known story.

The power and influence of Silicon Valley and its machines have raised questions about their dominion over us. They haven’t made us happier, after all. But in Fisher’s view, big tech is just a maker of modern tools, sparked by those video game dreams and now craved by billions. “Nobody blamed Marconi because Hitler used radio,” he says.

This article also appeared in print, under the headline “Valley Guys,” in the January 7, 2019, issue.