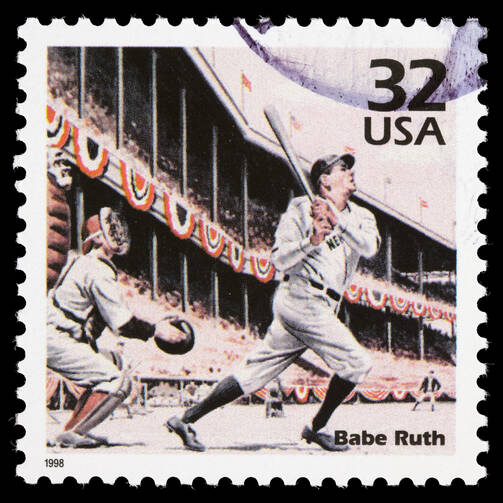 An argument could be made that the storied baseball stadium on 161st Street in the Bronx is not the house that “Ruth built,” but instead the house the Xaverian Brothers built. As Jane Leavy notes in her sprawling new biography, it was while a young George Herman Ruth was living at St. Mary’s Industrial School in Baltimore that the Sultan of Swat fell under the spell of a baseball-loving Xaverian brother named Martin Leo Boutilier, known as “Brother Matt.”

“Ruth would credit Brother Matt for his pigeon-toed gait and his uppercut swing—saying he was born as a hitter the first day he saw [Brother Matt] hit a ball,” writes Jane Leavy. Before he died in 1948, at the age of just 53, Ruth fondly recalled Brother Matt “teaching me how to play ball—and how to think.” That’s not exactly a compliment, given the more tempestuous moments of Ruth’s life (as well as Brother Matt’s, it turns out), all of which are colorfully documented here.

Right up front, Leavy—who has also authored biographies of Mickey Mantle and Sandy Koufax—cites the Jesuit maxim: “Give me the child for the first seven years and I’ll give you the man.” Slightly disappointing, then, that she makes rather quick work of numerous seemingly fascinating figures from St. Mary’s. Leavy’s main focus is a cross-country barnstorming tour Ruth and fellow Yankees slugger Lou Gehrig embarked upon in the autumn of 1927, after what was arguably Ruth’s and the Yankees’ greatest year.

The Bronx Bombers won a record-shattering 110 games (out of 154) that year, and swept the Pittsburgh Pirates in the World Series with a lineup that featured seven future Hall of Famers. And yet, when the season ended, Ruth—already the most prominent athlete of his era—felt compelled to hit the road to participate in a tour that was part baseball exhibition, part traveling circus and (most importantly) very, very profitable.

Ultimately, Jane Leavy's The Big Fella is very much like its subject, Babe Ruth: ambitious, entertaining and always willing to swing for the fences.

Leavy then steps back to chronicle Ruth’s life and times, with a heavy emphasis not only on the culture Ruth played in, but the ways he radically altered that culture, with the help of his visionary agent Christy Walsh.

“What is most striking about Ruth at this remove is how thoroughly modern he was,” writes Leavy, “not just in the way he attacked a baseball but also in the creation, manipulation, and exploitation of his public image at the precise moment in history when mass media was redefining what it meant to be public.”

Walsh paved the way for future sports agents who—for better or worse—would transform mere athletes into revenue-generating “brands.” No small feat, considering that just a few years prior to his historic 1927 season, Ruth was a pariah: a tabloid piñata who had very publicly ruined his marriage, and whose debauched lifestyle had led to reports that he was near death.

Leavy’s book (like other Ruth bios) could have taken a broader look at how St. Mary’s shaped this enormous public figure, who maintained an intriguing relationship with Catholicism throughout his life. Walsh, Leavy notes, convinced Ruth to actively campaign for Al Smith in 1928, yet there is no mention of what Ruth may have thought about the election’s anti-Catholic hysteria. And while Leavy’s exploration of swift 1920s changes in everything from marketing to media morality is compelling, a closer look at elite controversial athletes who preceded Ruth—boxer Jack Johnson and baseball stars Ty Cobb and “Shoeless” Joe Jackson come to mind—might have offered broader insights into the evolution of sports, celebrity and scandal.

Ultimately, The Big Fella is very much like its subject: ambitious, entertaining and always willing to swing for the fences.

Tom Deignan, a contributor to the recent book Nine Irish Lives, has written about books for The New York Times, The Washington Post and the National Catholic Reporter.