‘Bohemian Rhapsody’: A martyr’s tale for the classic rock set 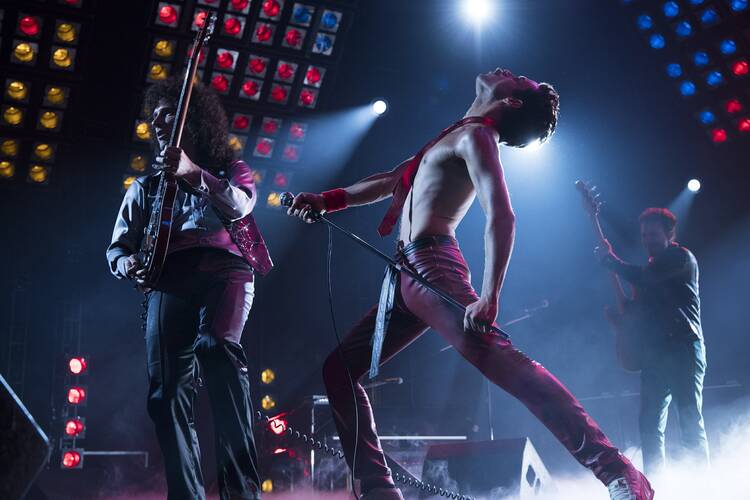 Loud, vivid and yearning to be operatic, “Bohemian Rhapsody”—a.k.a. the Queen movie—was always destined to be a martyr’s tale, a tragic romance, maybe rock’s answer to “La Boheme.” Freddie Mercury, the band’s guiding diva, died of AIDS complications in 1991—early enough in the epidemic to have been one of its more celebrated victims. The band was huge (still is; few acts will ever outsell them), and Mercury was pop’s most flamboyant performer—a closeted icon who rode a gay aesthetic to stardom. It is a poignant story even now. Or especially now.

The “problems” with “Bohemian Rhapsody”—titled after the 1975 single that remains one of rock’s iconoclastic masterpieces—begin with the enormous expectations of the movie and the emotional investment so many fans have in the band. And with Mercury, whose portrayal by Rami Malek (“Mr. Robot”), outfitted with a set of Freddie-worthy buck teeth, is a close-to-alarming thing to watch. Mercury, with all the outsider credentials a young man might not want in ’70s London, triumphs over not only conventional pop but also conventional beauty.

But the movie is far more conservative than its subjects, two of whom, the guitarist Brian May and the drummer Roger Taylor, are among the film’s producers. Knowing this adds to the sense of that the story has been laundered: The band dynamics in the film have almost no edge at all. The conflicts are always outside the group, never within, at least until late in the game when Freddie decides he needs to go solo for absolutely no reason. He ultimately sees the error of his ways and returns just in time for the justly celebrated performance by Queen at 1985’s Live Aid benefit concert—which is recreated by the filmmakers with a heady mix of grandeur and adrenalin.

The shared sense of musical mischief among the bandmates—May (Gwilym Lee), Taylor (Ben Hardy) and bassist John Deacon (Joseph Mazzello)—is an emotionally comforting element in “Bohemian Rhapsody”; the portrait may actually be true, but movies seldom let facts get in the way of convenient dramatic conflict. Elsewhere, however, the history is really off. Mercury never actually married best friend Mary Austin, played by Lucy Boynton, for example. And there are other problematic aspects aswirl around the movie’s release: The director, Bryan Singer, was not only fired shortly before principal photography was completed (and replaced by Dexter Fletcher); he is currently facing sex-abuse allegations. And for all its energy and uplift, “Bohemian Rhapsody” seems to be a movie in conflict with itself.

“Do you think the movie vilifies the gay community?” It was not the question I had expected. But it was not a bad one.

The morning after I saw it with my regular movie-screening partner, Sue, and we had dissected the movie over dinner, she emailed a follow-up: “Do you think the movie vilifies the gay community?” It was not the question I had expected. But it was not a bad one.

In one sense, no: The Freddie Mercury of the film arrives fully formed. The child of conservative immigrant parents (Parsi, by way of Zanzibar), he undergoes no clichéd evolution from shrinking, unsure violet to screaming Queen; he may not be out, but he is outré. When Mary says to the increasingly remote Freddie, “I’ve suspected you were gay for some time” (or words to that effect), the audience will be asking, “What took you so long?”

On the other hand, the one-time manager Paul Prenter (Allen Leech) who emerges as Freddy’s sole gay ally amid the vast Queen machinery, is also the villain of the piece, cutting Freddie off from all others and jealously protecting his turf. He also seems to be Freddie’s conduit to a leathery gay world that is introduced with as unsubtle a piece of Christian imagery as one might cook up. Intercutting concert footage and Freddie’s off-stage temptations, the movie ultimately juxtaposes its subject’s surrender to his darker impulses with a scene of a supine Freddie, crowd-surfing an audience of worshipful fans and assuming full crucifixion mode. It ain’t subtle.

Is this the end of classic rock?
Maurice Timothy Reidy

But, at the same time, what exactly does it mean? Freddie Mercury’s martyrdom on the public stage is made clear—the scenes of a slavering British press corps badgering him for salacious tidbits is depicted as the kind of stuff that precipitates nervous breakdowns. His private life is something else.

It will seem odd, but in my ruminations about the highly entertaining if problematic “Bohemian Rhapsody” I keep thinking about “Lawrence of Arabia,” a genuine epic but also a film with many parallels to Mr. Singer’s. Its hero was sexually repressed, the war within himself being reflected in his conflict with an outside force (Freddie’s enemy being standard pop musicality). He had allies who were fiercely loyal, but the forces of the system were fatally arrayed against him. His demise is foreshadowed—or, actually, just spelled out—from the opening moments of the story. And while historical accuracy is not the first priority, the point of the story is sacrifice: the artist on a cross. That may seem a bit grandiose, but grandiosity was always the fuel source of Queen and Freddie Mercury—and of “Bohemian Rhapsody” as well.

I have watched this classic tale. Its pretty cool. Now its easy to watch all HD movies, TV shows and series for free on Android using Cinema APK.