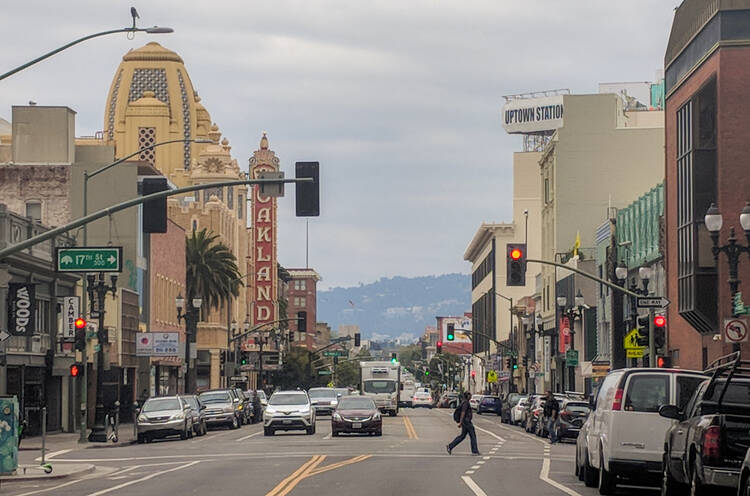 Oakland, Calif., is having a zeitgeist moment. The recent films “Black Panther,” “Sorry to Bother You” and “Blindspotting” were all directed by filmmakers from Oakland. The Golden State Warriors continue to rack up championships. The food scene is hyped in the national press.

But scratch the surface and Oakland’s trenchant, seemingly unsolvable problems remain. Homeless encampments grow, people of color and the working class are regularly displaced by gentrification, local politicians bicker and do little to change anything, the Warriors and Raiders are both leaving, and crimes like the recent stabbing of a black teenager, Nia Wilson, are repeated with horrifying regularity. Into these colliding visions of Oakland’s identity, arguments about whom the city really belongs to and this undulating pattern of creativity and violence arrives Tommy Orange’s debut novel, There There.

Orange, like many characters in his novel, was born and raised in Oakland. He is Native American, a member of the Cheyenne and Arapaho tribes. The Native characters in Orange’s novel are very much urban, but as the narrator of the prologue says, “an Urban Indian belongs to the city, and cities belong to the earth.” Some parts of Oakland’s Native population were rooted here before there was an Oakland, and others arrived later, but over time, they became part of the city, and now they “know the downtown Oakland skyline better than any mountain range.”

Rather than trying to speak about Oakland’s Native community in a single voice, Orange employs a kaleidoscope of Native narrators, including a teen born with fetal alcohol syndrome (which he refers to as “the drome,” the way he heard it spoken as a child), half-white characters struggling to understand and balance their dual identities of colonizer and colonized, elders trying to connect with children they abandoned, and young filmmakers, community activists, drug dealers and aspiring writers.

The Native characters in Tommy Orange’s There There are very much urban, but as the narrator of the prologue says, “an Urban Indian belongs to the city, and cities belong to the earth.”

All of these characters eventually end up in the same place in the novel’s final pages: at a powwow in Oakland’s crumbling Coliseum, where an older character who cleans up the stadium’s trash reminds readers of the years when the Raiders and the A’s racked up championships. Back then, he says, sports offered the city a different kind of narrative, one where “it was a really good time to be from Oakland, to feel that you were from that thing, that winning.” But the last time the A’s played in a World Series, in 1989, the Bay Area was cleaved by a huge earthquake that killed dozens and destroyed buildings, bridges and roads, and that tore chunks of Oakland out of the earth for good.

Along the way, Orange explores the question of Native identity through the lens of characters who do not always feel very Native. This unease is layered with unease about the identity of Oakland itself. In one cringe-inducing scene, a young Native artist named Dene Owende, who is vying for a grant, chats with a newly arrived white guy who claims “no one’s really from here” when it comes to Oakland, mangling the Gertrude Stein quote about there being no “there there.” Dene, who knows Stein was writing about how the Oakland of her childhood had changed beyond recognition, says of the white guy that he “probably used the quote at dinner parties and made other people feel good about taking over neighborhoods they wouldn’t have had the guts to drive through ten years ago.”

For many of Orange’s characters, the question of what it means to be born and raised in Oakland crashes up against the question of what it means to be Native. For Orvil Red Feather, his great-aunt who raises him and his brothers “had been openly against them doing anything Indian.” Instead, she treated their Native identity “like drinking or driving or smoking or voting. Indianing.” After his great-aunt tells him that “you’re Indian because you’re Indian because you’re Indian,” Orvil spends years learning to be Indian from the internet: Googling powwow music and dancing, reading Native publications online. But this does not solve the problem of identity. Orvil puts on a set of powwow regalia he finds in a closet and sees an Indian boy “dressed up like an Indian.” He keeps staring, Orange writes, “waiting for something true to appear before him.”

Ultimately, the intersections of Orange’s Native characters’ quest to define their identity and Oakland’s struggle to do the same are about redefining the narratives forced onto both. “All these stories that we haven’t been telling all this time,” he writes, “are just part of what we need to heal.” But, he adds, “don’t make the mistake of calling us resilient.” His Native characters are addicted to many things: alcohol, drugs, the internet, bad relationships. The genocide of Native Americans at the hands of missionaries and colonizers; the subsequent struggle to retain their languages, faiths, arts and culture; and the fracturing of Native families as they were forced off their lands is a narrative of loss, full stop. But, Orange writes, there is some consolation in understanding that doesn’t mean their history has been completely erased. “Look no further than your last name,” he writes. “Follow it back and you might find your line paved with gold, or beset with traps.”

Ultimately, the intersections of Tommy Orange’s Native characters’ quest to define their identity and Oakland’s struggle to do the same are about redefining the narratives forced onto both.

The question of Native identity keeps arising throughout There There. Some of Orange’s characters don’t even know their tribal affiliation; others are professional powwow employees, driving a circuit from gathering to gathering. All are Native, but all ask repeatedly, to themselves and to others, what being Native really means. Dene, working on his storytelling project, interviews Calvin, another Native kid feeling restless and adrift. Dene asks Calvin to talk about being his experiences growing up in the city. “I don’t know,” Calvin says, mentioning that his Native father was never a part of his life. “I feel bad sometimes even saying I’m Native. Mostly I just feel like I’m from Oakland.”

In There There, Oakland becomes a character as much as any of Orange’s other individuals: regularly erupting into violence, steadily erasing the history of its impoverished citizens who jump from apartment to apartment, existing in a series of “long, grey streets” that seem to go nowhere when you’re a kid on a bike pedaling around. But one thing about being from a place marked over and over again by regular invasions of those who would seek to define it in their own image is that it still belongs to whoever has dug in deeply enough to call it home. Native Americans know this; so do those of us born and raised in Oakland. And in both cases, the chip carried on a shoulder as the city is reinvented by outsiders again and again can become, as Orange writes, “a concrete chip, a slab.”

Street artists have become some of the strongest activist voices in Oakland, making a case for graffiti as a testimony against erasure. A few years back, a mural appeared on a side street in West Oakland, a neighborhood where some of Orange’s characters live, now being scoured by gentrification. Sprawling across two buildings, it depicts twining, forking, and burrowing lines. In large text across the top, the artist makes the point, which might be Orange’s too, and Oakland’s: ROOTS RUN DEEP.

This article also appeared in print, under the headline “Restless and Adrift in Oakland ,” in the Fall Literary Review 2018, issue.