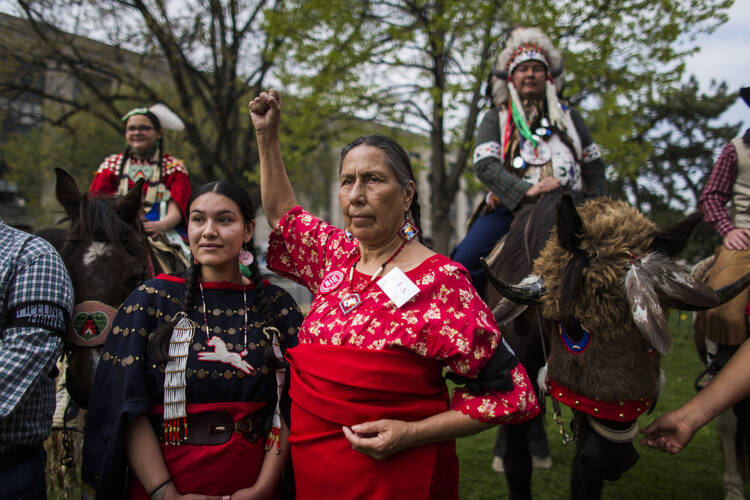 Samantha Jones of the Sicangu Lakota band of the Rosebud Sioux, left, and Casey Camp of the Ponca Nation are seen in Washington D.C. in this 2014 file photo. (CNS photo/Jim Lo Scalzo, EPA)

This arrangement is now under threat because of the refusal by the Trump administration’s Department of Health and Human Services to grant Native American tribes’ request for exemption from new state laws implementing work requirements for Medicaid. The core of the administration’s reasoning is that Native Americans constitute a “racial category” and that granting exemption would constitute racial discrimination (presumably against others). In refusing the exemption, the administration shows a lack of respect for the sovereignty of Native American nations and once again breaks the spirit of the treaties. Considering the ethnic cleansing and social marginalization native peoples have experienced in U.S. history, the status quo is already deeply unjust.

Unemployment on Native American reservations is far above the national average, just one of many symptoms of entrenched racial and economic inequality facing Native Americans. Implementing a work requirement for access to Medicaid will disproportionately hurt those in areas already suffering from lack of economic opportunity. Any reduction in Medicaid funds among Native American tribes could cripple the Indian Health Service. And as the Republican-held Congress eyes further welfare reform and pushes a farm bill that cuts SNAP benefits, the precedent of treating Native Americans simply as a racial category means this most marginalized of groups in the country is likely to go without critically needed aid.

It goes without saying this is not the way to ask forgiveness from native peoples and achieve reconciliation with them. The Trump administration should reverse course and continue to recognize the unique tribal sovereignty of Native American people and work with tribal governments to determine how best to tackle the severe economic, social and public health challenges facing Native Americans.

Thank you for expressing that Indigenous people in US are sovereign Nations. We are. I am not Christian. Catholics are Christians. The Editors of this magazine gets it while Paul Jones does not. It's true Trump who is not my President is not honoring the treaties. It has happened before, broken treaties upon broken treaties. Many of them. Lies upon lies. Genocide. That has gone on too long. Other Presidents like Andrew Jackson were disrespectful of us. I will not go on and on but I could.

Really!!! No such thing under our Constitution as "Sovereign Indian nations" you can cite in our Constitution post passage of the Indian Citizenship Act of 1924. Such mythical nonsense. As of the passage of the Indian Citizenship Act of 1924, there are no more "Indians" within the original meaning of our Constitution...only U.S./State citizens with "Indian ancestry/race" entitled to no more and no less than every other non-Indian U.S./State citizen. There is no such thing under our Constitution as an "Indian treaty" post 1924 citizenship...no treaties with constituency! The unbiased text affirms our Constitution has no treaties with Constituency. If you believe such treaties exist, provide the Amendment to our Constitution making your post true:
http://lexrex.com/enlightened/AmericanIdeal/aspects/limited_gov_treaty.htm
The object of treaties is the regulation of intercourse with foreign nations, and is external."
An especially interesting piece of evidence supporting the conclusion that the Treaty Clause was intended and understood by the Framing and Ratifying Conventions not to authorize the President and Senate, by a treaty, either (a) to override the Constitution, in whole or in part, or (b) to make domestic law (as distinguished from governance of relations with foreign governments),
[Section 52.] "Treaties are legislative acts. A treaty is a law of the land. It differs from other laws only as it must have the consent of a foreign nation, being but a contract with respect to that nation . . . 2. By the general power to make treaties, the Constitution must have intended to comprehend only those objects which are usually regulated by treaty, and cannot be otherwise regulated. 3. It must have meant to except out of these the rights reserved to the States; for surely the President and Senate cannot do by treaty what the whole Government is interdicted from doing in any way."

Another fallacious statement is that a treaty "can override the Constitution;" which defies historical truth, as we have seen. A related and most preposterous allegation is that a treaty "can cut across the rights given the people by the constitutional Bill of Rights"--than which nothing could be further from the truth, partly for two reasons: the Constitution does not authorize any such treaty and, secondly, the people are, of course, given their rights by God and not by themselves through their own creation: the Constitution (including its Bill of Rights, or Bill of Prohibitions, Amendments). The quoted statement is farcical.