Is war a necessary evil? 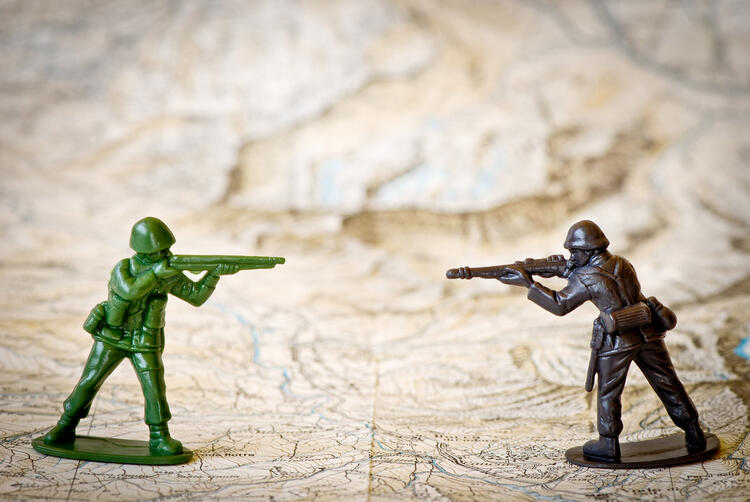 In this book’s chapters on the history of war, its causes and effects, and the effort to control war through ethics and law, it becomes clear why the author of this very useful volume wishes he were a pacifist but is not. A cursory review of the history of warfare and its effects is enough to demonstrate that war is a great evil, even if at times a necessary one. We should work to end war, and knowing its history, what causes it and how we might mitigate the harm it does are important parts of that work.

War: An Equiryby A. C. Grayling

A. C. Grayling’s three chapters on the history of war lead to the question of what causes war, an exploration not of the causes of this or that war but of war as a phenomenon. He explores two main answers to this question: 1) Humans are innately violent, or 2) human societies are organized in such a way that war becomes more likely than not. The or in the last sentence should be an and, because Grayling recognizes that even if humans are instinctively violent, war—as opposed to conflict—is possible only where political and social structures create the capacity to conduct a war.

This insight is probably the most important in the book, and it is twin to another: Once political and social structures provide the framework for war, they create institutions that make war likely. I write these words the day after Memorial Day in the United States, and no more evidence is needed for Grayling’s claim that the idea of war is carried in the DNA of society and the economy than to see the sentimentalism and commercialization so prominently on display on this holiday.

There are points to quibble with in this volume, but in the end Grayling’s call for an “aversion therapy of truth” that does not romanticize war but shows us war’s “mangled bodies, blown apart children, blood running into gutters,” not to mention the pain and suffering of those whose family members are fighting the war, is compelling. Yet this therapy of truth is not what any society really wants; it is certainly not what the United States wants. Watch or listen to any baseball game on Memorial Day and you will hear the announcers solemnly intone the virtues of those who “made the ultimate sacrifice” in between hawking the goods of the local car dealers and alerting fans to the next bobblehead giveaway.

Historians are likely to find Part One, “War in History and Theory,” the most interesting part of the book, as political scientists or psychologists may find Part Two, “The Causes and Effects of War.” But for this ethicist, Part Three, “Ethics, Law, and War,” is particularly helpful, noting as it does the complementary nature of classic just war tradition and international humanitarian law. In seeking to limit the damage of war, these traditions represent the highest aspirations of humankind. They speak to the human capacity for compassion that is every bit as innate as our propensity to violence.

At the same time, Grayling does not spare his reader from the “frightening evidence of cruelty and barbarism” that war everywhere provides. His brief discussion of rape as a strategy of war is extremely important, even if such a discussion is almost inescapably pornographic. Nevertheless, attending to the relationship between war and rape is a bracing antidote to the unfortunate tendency to discuss just war theory in the language of the seminar room rather than the profanity-laced argot of the battlefield.

What does Grayling see as the future of war? Here the sections on the history, causes and ethics of war are joined in the recognition that war has always been and will always be driven by technological innovation. Acknowledging this is also to acknowledge that the political and social conditions necessary for technological innovation are universally associated with war. Technology determines the kind of fighting that is possible, and the fighting reveals where technology needs to evolve next.

The problem of violence in the modern world
J. J. Carney

At this juncture, says Grayling, the most worrisome development on the horizon is so-called lethal autonomous weapons, or LAWS. Like many novel warfighting technologies, LAWS pose serious challenges to just war thinking and international law. Necessity, discrimination and proportionality are conditions that are important to the ethics and law of war, but each requires nuanced judgment when applied. Will the killer robots that future battlefields may see be capable of that kind of nuanced judgment? As Grayling puts it, will a robot be able to discriminate between a terrified civilian trying to surrender and an enemy soldier about to attack?

Grayling tells us at the start of his book that he is as close to being a pacifist as it is possible to be without actually being one. He is not a pacifist because he admits that, sometimes, war is a necessary evil. Yet accepting the judgment that war can be justified is not incompatible with working to make it exceptionally rare. Here the pacifist and the just war thinker can make common cause. And the place to begin, says Grayling, is to recognize the fact that the very idea of war is far too easily and thoughtlessly accepted. Alas, war is not the exception but the rule. If war were genuinely the exception, it would not be a “permanent presence in the budgets, decisions, and attitudes of states.”

Grayling is not a flamethrower or culture warrior. He is that rarest of breeds: a careful, sober scholar who is a prophetic witness to the need for change.

This article also appeared in print, under the headline “A necessary evil?,” in the August 21, 2017, issue.

Paul Lauritzen is a professor of religious ethics at John Carroll University in Ohio.