The man who fought papal infallibility 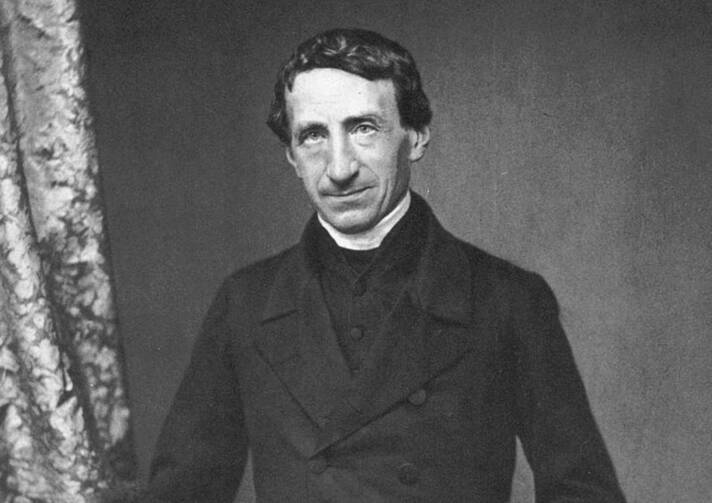 The French Revolution and its pan-European, Napoleonic aftermath traumatized the traditional ruling classes, clerical and lay. The revolution’s cry of liberty, equality and fraternity turned out to be, as they saw it, a recipe for carnage and chaos. When the revolutionary government seized the property of the French church, it reduced to penury that extraordinarily wealthy institution.

The Pope and the Professorby Thomas Albert Howard

Wherever Napoleon’s armies went—and they went just about everywhere—an unbending policy of secularization followed, which included suppression of religious institutes and radical reorganization of church structures. In the Treaty of Tolentino, 1797, Pope Pius VI, thoroughly humiliated, had to pay a huge indemnity, agree to French occupation of the most important cities in the Papal States, like Bologna and Ferrara, and cede to Napoleon possession of hundreds of precious manuscripts and works of art. He died two years later in France as Napoleon’s prisoner.

After Napoleon’s defeat, the situation allowed a religious revival to take place, but a deep feeling of insecurity gripped many Catholics. In 1819, Joseph de Maistre published his book Du Pape (On the Pope), in which he argued that an infallible papacy was the only salvation from the chaos that threatened. The book set off a controversy about the role of the papacy in church and society that raged in the popular press for the next 50 years, until the opening of the First Vatican Council (1869-1870).

When Pius IX convoked the council, he described its purpose in the most general terms, but responding to the problems raised by the “modern world” was what he intended.Neither in the bull of convocation nor in the preparatory documents of the council was papal infallibility mentioned. Nonetheless, the agitation for it, not in Rome but at the grass roots, had reached such a pitch that it was almost inevitably bound to appear on the council’s agenda.

No one was more responsible for accomplishing that goal than Cardinal Henry Manning, a convert and archbishop of Westminster. He, with a few others, marshaled the bishops to form a large majority at the council ardent for a definition. Opponents of the definition mustered arguments against it, many of which were historical. It is at that point that Ignaz von Döllinger, the subject of Thomas Albert Howard’s excellent book, enters the scene.

Forgotten today except by specialists, Ignaz von Döllinger was one of the most widely respected Catholic intellectuals of his day.

Forgotten today except by specialists, Döllinger (1799-1890), professor of church history at the University of Munich, was one of the best known and most widely respected Catholic intellectuals of his day. In 1845 William Gladstone, destined to be British prime minister during the council, visited him and became a lifelong friend. Two years later John Henry Newman, recently converted to Catholicism, also visited him while returning to England from Rome and tried to persuade him to join the faculty of the recently established Catholic University of Dublin.

Three years after Newman, John Dalberg-Acton, later to be Lord Acton, founder of the Cambridge Modern History series, presented himself at Döllinger’s door and asked him to be his professor. He was 16 years old. This brilliant polymath, a devout Catholic, related by blood or marriage to several noble families on the continent, fluent in English, German, French and Italian, soon graduated to become not only Döllinger’s closest friend but his partner in working to oppose the decree on infallibility.

Among the intellectual problems with which the “modern world” confronted the church, possibly none was more serious than the development of a new method of historical criticism, now applied to sacred texts and sacred doctrines. According to that method, it was no longer sufficient to adduce proof-texts and metaphysical arguments in defense of a doctrinal position. Those texts and arguments had to pass the test of historical criticism. Both Döllinger and Acton were convinced that the texts and arguments used to promote papal infallibility did not pass the test. They set to work to prevent the definition.

Shortly before the council opened, Acton rented a large apartment in Rome, where he entertained and consulted anti-infallibility bishops and helped organize them as a counterforce to the majority. But his main task was to supply Döllinger with insider information about the council. To ensure his dispatches would not be intercepted by the papal police, he sent them to Munich in the diplomatic pouch of the Bavarian ambassador in Rome.

Döllinger reshaped Acton’s letters and published them, under the pseudonym Quirinus, first as a series of articles and then as a book, Letters From Rome on the Council. The book, soon translated, created an international sensation. According to Dὅllinger, infallibility was based on forgeries and distortions of history. It was utterly illegitimate. His and Acton’s efforts to prevent the definition were of course unavailing. On July 18, 1870, the council approved the decree “Pastor Aeternus,” with only two bishops dissenting.

On that day 535 prelates were in Saint Peter’s to cast their votes, down about 25 percent from the more than 700 who had been present at the council’s opening seven months earlier. Sickness, death and urgent business at home partially account for the attrition, but bishops who opposed the decree had quietly been slipping away for some time, a phenomenon that culminated in the departure of a large number the evening before the formal approval of the definition by the assembled bishops and the pope.

According to Dὅllinger, infallibility was based on forgeries and distortions of history.

Did the defections indicate that opposition to the decree was so strong it might spark a major schism? That was the dark question that weighed upon the minds and hearts of those present in Saint Peter’s on the day of promulgation.

Only in Germany did that threat for a short while seem on the verge of realization, largely because of forces that rallied around Döllnger as their hero and spokesman. But Dὅllinger wanted no part in a schism. He refused, nonetheless, to submit to the decree, which resulted in his excommunication. With that he became a martyr-hero, a new Luther who chose conscience over church. Honors were heaped upon him. The universities of Oxford, Edinburgh, Marburg and Vienna conferred upon him honorary degrees.

This is the story Howard tells in his book. It is a fascinating story, much richer than I have been able to convey in these few paragraphs. As far as I know, not even in German is there a book on Döllinger that is as well researched as this one. Howard visited and made use of all the archives pertinent to the subject—German, Vatican and British. The good news is that the erudition does not bog the story down. The prose is accessible and moves at a brisk pace.

But the book is far from being simply a biography. Howard is able to move beyond the arguments Döllinger adduced against the decree, some of which do not stand up to the high standards Döllinger required of others. He sees “the professor’s” conflict with his opponents as in essence a conflict over method and thus another aspect of the church’s relationship to the “modern world.” The conflict raised the crucial question of the role modern historical criticism should play in theological method and in the understanding of dogma—a problem not fully resolved even today.

In the intriguing final section of the book, “Conscience, Catholicism, and the Modern Age,” Howard points out how the Second Vatican Council vindicated Döllinger’s appeal to conscience, validated his precocious ecumenical concerns and tempered the one-sided emphasis on papal authority codified in the decree on primacy and infallibility.

I strongly recommend this book for anybody interested in Catholicism’s struggle with the modern world and in the process by which in the 19th century the church became more pope-centered than ever before.

This article also appeared in print, under the headline “The man who fought papal infallibility,” in the July 24,2017, issue.

John W. O’Malley , S.J., is University Professor in the Theology Department at Georgetown University. In 2018 Harvard University Press will publish his history of the First Vatican Council.