Historian and Critic: An archive of articles by John W. O'Malley, S.J. 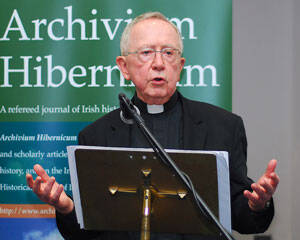 John W. O'Malley, S.J., began writing for America in 1972. Since then he has brought his skills as a historian to bear on topics as diverse as Vatican II, the sexual abuse scandal and the presidency of Barack Obama. Fr. O'Malley is university professor in the theology department at Georgetown University and author of The First Jesuits and What Happened at Vatican II (Harvard Univ. Press). In the September 24, 2012 issue, he looks at the medieval university and the lessons it offers for Catholic institutions of higher education today.

Here we offer a selection of Fr. O'Malley's articles for America:

John W. O’Malley
Show Comments (
2
)
Comments are automatically closed two weeks after an article's initial publication. See our comments policy for more.
Sally Andrade
9 years 9 months ago
A view from the U.S./Mexico Border in El Paso, TX:
Given the viciousness and hostility of the national and regional political arenas today, it is valuable to re-read Father O'Malley's 2009 comments about President Obama and the spirit of the Vatican II Council.  If only more leaders, both ecclesiastical and secular, would demonstrate those values of civility, willingness to listen and cooperation in addressing our common problems.
9 years 9 months ago
God bless Fr. O'Malley with a long life.  I have long appreciated his insights, wisdom and common sense, especially his book "What Happened at Vatican II."  I wish his down-to-earth scholarship would be more widely read and appreciated.  He's right up there with the great Jesuit scholars of the last 50 years such as Martini, Rahner, Murray, McCormick, Sullivan, Orsy, et al.  Thank you, AMERICA, for this little selection.