A Theology that Weeps 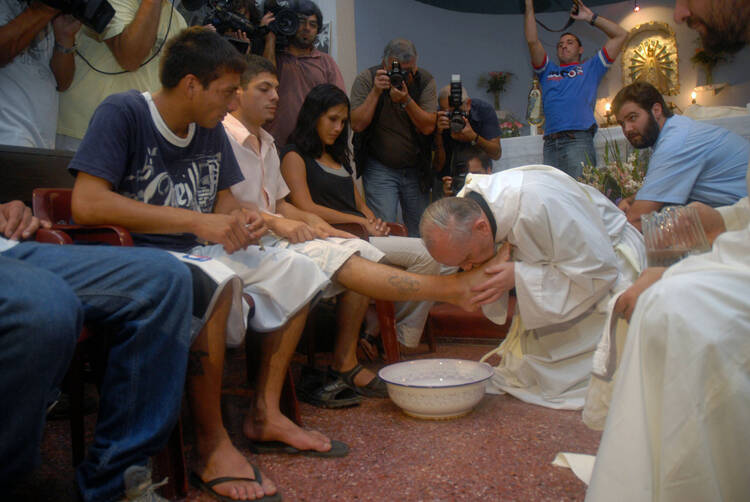 Clemens Sedmak writes elegantly about a church that is poor and for the poor. This church does not just happen. It takes a commitment. It realizes that the poor are not just objects of our charity or concern but our evangelizers. They have much to teach us, since they know the sufferings of Christ. Experiencing poverty, in ourselves or in solidarity with the poor, helps us to understand vulnerability, nakedness, mortality and decay, shame and the loss of belonging. Our option for the poor serves as a necessary epistemic correction for the church.

The book’s subtitle, “Pope Francis and the Transformation of Orthodoxy,” links what choosing to become a church of the poor does to our understanding of orthodoxy. Sedmak insists that orthodoxy has at its center a loving relationship with God. Orthodoxy is not just about propositional truths. There is an existential orthodoxy. We cannot have a right relationship with God if we do not have a relationship with the poor. God and Jesus favor the poor not because poverty is always a good or blessing in its own right. As St. Thomas Aquinas rightly argued, poverty can be a malum simpliciter, a pure evil. Aquinas insisted it is evil not to be able to support oneself and an evil not to be able to assist others.

Rather, God has a special closeness to those who are defenseless. There cannot be any true orthodoxy without orthopraxy and orthopathy. We need, Sedmak claims, a kneeling, weeping theology and not just a theology of propositional truths. Orthodoxy is linked to wisdom. There is no orthodoxy without truths that shape our identity. Propositional orthodoxy is not enough; doctrines have to be lived. There are limits to any claims of orthodoxy. There is a clear dividing line between doctrine and God (no doctrine can encompass God). There are limits to our individual perceptions of doctrine. There are boundaries between propositional orthodoxy and the profound loving and living for God in our faith.

A Church of the Poorby Clemens Sedmak

In a chapter entitled “The Gospel of Joy: Orthodoxy as Discipleship,” Sedmak addresses how Jesus built a church of the poor. Jesus chose to be poor and rejected the temptations of materialism. He preached the kingdom of God as good news for the poor. He associated with the poor and the outcasts. Jesus challenged the intellectual elites and the rich. He was not fully poor but lived a life of limited austerity. He identified himself as kenotic, one who emptied himself. Yet Jesus did not systematically challenge social conditions and structural issues. He did not fully heal the material situation of the poor. There is also a distinction between the voluntary poor (who live meagerly by choice) and desperate or forced poverty, which involves a lack of food security, a sense of being trapped and exclusion from learning and recreational opportunities. Poverty stunts the growth of agency and often involves invisibility, dependence and pain.

Another chapter, “A Church of the Poor—The Beatitudes—Costly Joy,” reminds us that the Second Vatican Council’s “Pastoral Constitution on the Church in the Modern World” called for a conversion of the church to become a church of the poor. Sedmak reminds us of the church’s teaching that private property is subordinate to the universal destination of human goods and that every person has a right to sufficient material goods for health, food and shelter to provide a threshold of sufficiency and decency.

From the beginning of the church, there have been two different readings on the issue of wealth. One allowed a moral compromise and social harmony between rich and the poor. The rich could be good Christians if they had a sense of detachment and gave to the poor in charity.

Pope Francis calls on President Trump to care for the poor and the outcast
Michael J. O’Loughlin

St. Clement of Alexandria, in his essay “Who Is the Rich Man Who Shall Be Saved?” represented this position. Opposed to this view was a more radical point of view that argued for a kind of incompatibility between being rich and being a disciple. St. John Chrysostom and St. Basil belonged to this latter camp. St. Basil seemed to feel that the poverty of the poor came from the egregious lust for wealth and power of the rich and that, indeed, you could not serve God and Mammon. In church teaching there is not always a clear choice between the two approaches to wealth. But the key point of an option for the poor should be that we must move from generosity to solidarity, that we put the perspectives of the underprivileged and disadvantaged at the heart of the church.

An option for the poor can lead us to a joyful orthodoxy. Joy, as Pope Francis insists, is central to the Gospel: joy at being created, saved, affirmed. Joy is an overflowing and cooperative good. The common good is served by a church that opts for the poor as central to its being. Orthodoxy is generous. It listens and is a pilgrim’s orthodoxy. It is also humble, knowing that the fullness of truth always lies beyond us. Sedmak’s careful analysis is not only illuminating; it deeply touched my heart and moved me spiritually.

This article also appeared in print, under the headline “A Theology that Weeps,” in the March 20, 2017, issue.

John A. Coleman, S.J., a sociologist, is the associate pastor of St. Ignatius Church in San Francisco.