Pope Francis: A conservative who sides with the poor 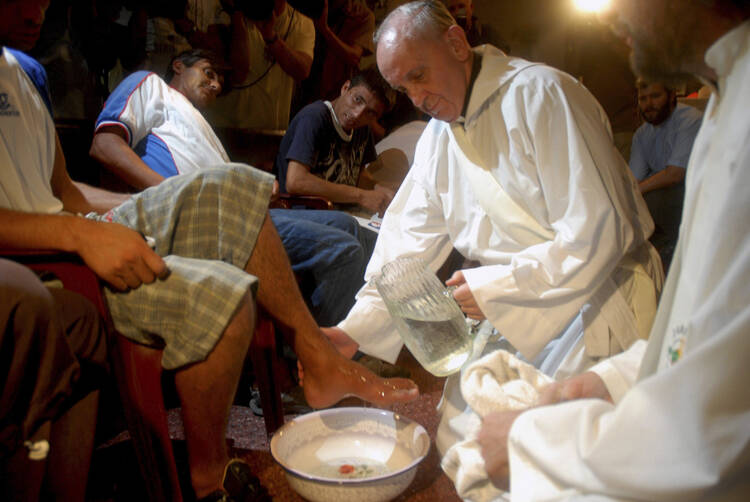 Although somewhat unexpected, the election of Cardinal Jorge Mario Bergoglio to succeed Benedict XVI has the air of a safe, compromise decision. At age 76, he does not have the physical vibrancy and personal dynamism that a younger man might have brought to Rome. Vatican watchers did not consider Bergoglio a front-runner and his name was not considered in speculation, even as the previously unimaginable selection of an American was widely discussed in the Italian media.

Pope Francis, as Cardinal Bergoglio, was known as a doctrinal conservative. His emphasis on solidarity with the poor is in line with a turning away in some respects from structural criticism, favored by some in the church. His selection represents an obvious reorientation of the church to the global south, but it does not signify the possibility of doctrinal change related to contraception, abortion or same-sex marriage -- and within the church itself on matters of priestly celibacy or women's ordination. These issues have increasingly set the church in conflict with a rapidly secularizing West.

Pope Francis hails from the church's growth regions in the developing world, and he can be expected to be attuned to the concerns of developing nations and their problems of inequity and human deprivation. Pope Francis is of Italian stock and was raised in a thoroughly Europeanized culture. That should put some of the cardinals, fearful of an overly thorough reform, at ease, despite the widespread feeling that "something" dramatic had to be done to reform the management of the Vatican and reduce the opacity of its financial infrastructure and sputtering bureaucracy.

During his papacy, Pope Benedict urged the establishment of a global governing institution that could mitigate the worst excesses of economic and political globalization. The choice of the name "Francis," after St. Francis of Assisi, suggests this pope will make it a priority to attend to the crying need of the global poor, those left behind by the free market's genius for wealth creation and its unfortunate tendency to deposit that wealth in a diminishing number of hands. No fan of Latin America's experiments with liberation theology, he has nonetheless proven to be a staunch defender of Latin American poor against the powerful economic and political forces that have assailed them.

He'll likely offer a more pastoral face to the papacy even as, based on his past criticism of the global economic order, he is likely to continue Pope Benedict's skepticism of unrestrained free market policies.

"We live in the most unequal part of the world, which has grown the most, yet reduced misery the least," Bergoglio said during a gathering of Latin American bishops in 2007. "The unjust distribution of goods persists, creating a situation of social sin that cries out to heaven and limits the possibilities of a fuller life for so many of our brothers."

Read the rest at CNN.

Kevin Clarke
@clarkeatamericaclarke@americamagazine.org
Show Comments (
4
)
Comments are automatically closed two weeks after an article's initial publication. See our comments policy for more.
Beth Cioffoletti
9 years 3 months ago
This sounds like social justice to me - Gospel. Maybe with that coming center stage, the so-called "social" issues (contraception, gay marriage, women priests etc) will find their proper perspective and be seen through the light of love rather than law. Maybe we'll forget about the labels "conservative" and "liberal", and find a new way with this new pope. I can't be more pleased with Pope Francis. I finally feel like I've found my Church!
KEN LOVASIK
9 years 3 months ago
I have the same feeling, Beth. I'm old enough to remember the election of Pope John XXIII -- we called him 'Good Pope John' -- who was also a doctrinal conservative, but a prayer, gentle and loving man who responded to the needs of the Church as he saw them. He was concerned that the Church was becoming a museum and that the 'air' in the Church was musty, and so he urged the Church to open the windows and let in some fresh air, which eventually lead to the Second Vatican Council! I see the same quiet, gentle, prayerful charisma of Pope John also in Pope Francis. It's been a long time since we've seen that kind of charisma leading the Church ... too long a time.
Thomas Orga
9 years 3 months ago
Issues and problems that seem unsolvable, and seem that way endlessly, can be resolved. It takes true leadership, which necessarily involves creativity, a new way of thinking that very few, really, are capable of. But, it does happen, through a wonderful combination intellect, courage and insight, insight. Pope Francis hopefully will bring about this new paradigm, this "new" way of thinking, by starting with the poor (certainly that is coming at the problem from a direction that hasn't been used is a long while). My hope is with him, hope is good. We have it now.
JR Cosgrove
9 years 3 months ago
Some comments: "These issues have increasingly set the church in conflict with a rapidly secularizing West." I would think this is a good thing. Why would it be bad? "make it a priority to attend to the crying need of the global poor, those left behind by the free market's genius for wealth creation and its unfortunate tendency to deposit that wealth in a diminishing number of hands." I don't think this is true. The opposite seems to actually be the case. There are more and more people sharing in the wealth creation of the planet. All the data points that way. Certainly there are still lots of poor and more to be done to ease the life of the unfortunate. But in many places it is spiritual and culturally poverty that is the problem, not material poverty. "We live in the most unequal part of the world, which has grown the most, yet reduced misery the least," This is a large over statement. The Pope should look at Africa and Central Asia for real poverty. I have been to South America several times and seen the average person with more than a minimal of material goods. Some of the cities are more advanced than some large US cities. There are definitely large pockets of poverty but to say that South America has not received the fruits of modern economic success is nonsense. Buenos Aires does not have anything close to the poverty of Nairobi or Delhi. It is a large bustling city with lots of malls that have the same array of goods found in a typical US shopping center. Parts of Santiago are more modern than most American cities and Brazil has several world class cities. There is definitely a lot of poverty but in no way has Latin America been left behind.