As Nancy Pelosi steps down, a look back at her mixed record with the Catholic Church 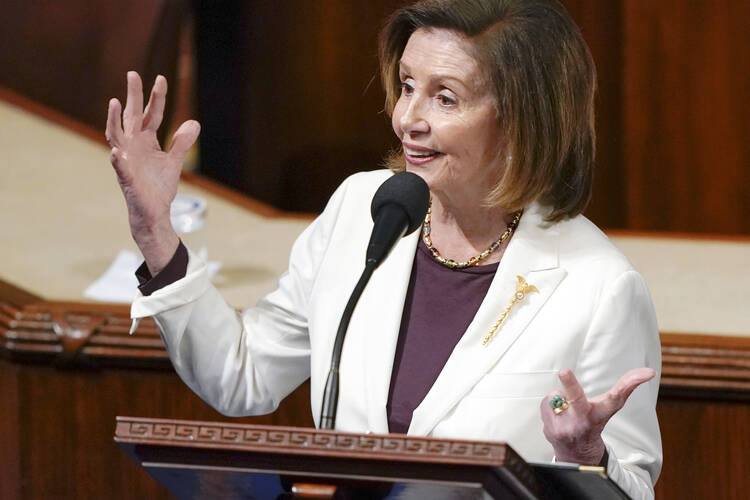 Describing herself as “a devout Catholic” and invoking the prayer of St. Francis, Speaker of the House Nancy Pelosi announced on Thursday that she will not seek a Democratic leadership post in the next Congress.

“I stand before you as Speaker of the House, as a wife, a mother, a grandmother, a devout Catholic, a proud Democrat and a patriotic American, a citizen of the greatest republic in the history of the world,” Ms. Pelosi said. But with the incoming Republican majority readying to elect a new speaker, Ms. Pelosi said Democrats “must move boldly into the future, grounded by the principles that have propelled us this far and open to fresh possibilities for the future.”

Ms. Pelosi, who has served in Democratic House leadership since 2002, including serving as speaker from 2007 to 2011, and again since 2019, said she plans to retain her congressional seat representing San Francisco.

Describing herself as “a devout Catholic,” Speaker of the House Nancy Pelosi announced on Thursday that she will not seek a Democratic leadership post in the next Congress.

During her 20 years on the national political scene, Ms. Pelosi frequently invoked her Catholic faith, drawing praise from progressives who saw in her an example of championing the church’s social justice values and condemnation from conservatives who cited her liberal political views as evidence that she did take her faith seriously.

At times, Ms. Pelosi, 82, has clashed with bishops over her support for abortion rights and same-sex marriage, including earlier this year, when San Francisco Archbishop Salvatore Cordileone took the unusual step of publicly barring Ms. Pelosi from Communion. The archbishop said he banned Ms. Pelosi from Communion following several meetings over the years in which he said he tried to “help her understand the grave evil she is perpetrating, the scandal she is causing, and the danger to her own soul she is risking.”

While Ms. Pelosi did not directly address the Communion ban, she said shortly after that she comes from “a largely pro-life, Italian-American Catholic family, so I respect people's views about that, but I don’t respect us foisting it onto others.”

Then in June, just after Archbishop Cordileone announced his decision, Ms. Pelosi met with Pope Francis in Rome, her second audience in as many years, and received Communion during a Mass at St. Peter’s Basilica. Last year, America named Ms. Pelosi one of the “Top 5 U.S. Catholic Newsmakers of 2021,” citing her meeting with Pope Francis, the clash with her archbishop and her political efforts “to strengthen the middle class.”

At times, Ms. Pelosi, 82, has clashed with bishops over her support for abortion rights and same-sex marriage.

Ms. Pelosi’s support for abortion rights and her relationship to her church has long been a flash point. In a 2015 interview with The New York Times, as Pope Francis visited the United States, Ms. Pelosi said that despite differences on abortion, “I actually agree with the pope on more issues than many Catholics who agree with him on one issue.” During her visit to the Vatican in 2021, Mrs. Pelosi and Pope Francis discussed the environment, migration and poverty.

And on other issues, namely health care and immigration, the speaker has found allies in the Catholic Church, particularly among women religious.

One of Ms. Pelosi’s most ambitious legislative accomplishments as speaker came with the passage of the Affordable Care Act in 2010. Reflecting on that law in a 2017 interview with The Washington Post, Ms. Pelosi praised Catholic sisters for their role in helping to shepherd the legislation.

“Look, we worked with the nuns. The nuns helped us pass the Affordable Care Act. The nuns. The Catholic nuns—thank God for the Catholic nuns,” Ms. Pelosi said, adding that she was grateful for their efforts to oppose Republican attempts at the time to overturn the law.

Immediately following the passage of the Affordable Care Act, Ms. Pelosi told an audience in 2010 at her alma mater, Trinity College, that she heard frequently from Catholic leaders that immigration reform should be next—a long-elusive goal that has evaded Ms. Pelosi and fellow Democrats.

“The cardinals, the archbishops, the bishops that come to me...say, ‘We want you to pass immigration reform,” she said in 2010. “And I said, I want you to speak about it from the pulpit. Some [who] oppose immigration reform are sitting in those pews, and you have to tell them that this is a manifestation of our living the Gospels.”

During her career in Congress, Ms. Pelosi met at least three popes. She greeted Pope John Paul II during his 1987 visit to San Francisco and later was received by Pope Benedict XVI. She told a reporter in 2015 that she had read Benedict’s papal encyclicals closely, pointing to his 2005 “Deus Caritas Est” as particularly “beautiful.” In 2013, Ms. Pelosi was present in Rome, along with then-Vice President Joe Biden, who would refer to her as “my Catholic sister,” to represent the United States at the installation of Pope Francis.

During her address to lawmakers on Thursday, Ms. Pelosi highlighted accomplishments reached under three presidents—George W. Bush, Barack Obama and Joe Biden—notably omitting any mention of former President Donald Trump, with whom she shared a particularly acrimonious relationship. In 2019, when asked by a reporter if Democrats “hated” Mr. Trump, Ms. Pelosi cited her faith.

“As a Catholic, I resent your using the word ‘hate’ in a sentence that addresses me,” she continued. “I don’t hate anyone.”

Earlier this year, Fox Business reported that Ms. Pelosi has her eye on serving as the U.S. ambassador to Italy, a post that remains vacant two years into the Biden presidency. Earlier this week, one of her aides said on Twitter that Ms. Pelosi has “no interest in becoming the U.S. Ambassador to Italy. She intends to continue serving in Congress regardless of her decision about House Democratic leadership.”

As for her prayer life, in 2010, Ms. Pelosi talked to The New York Times Magazine about childhood lessons that inform what she asks of God.