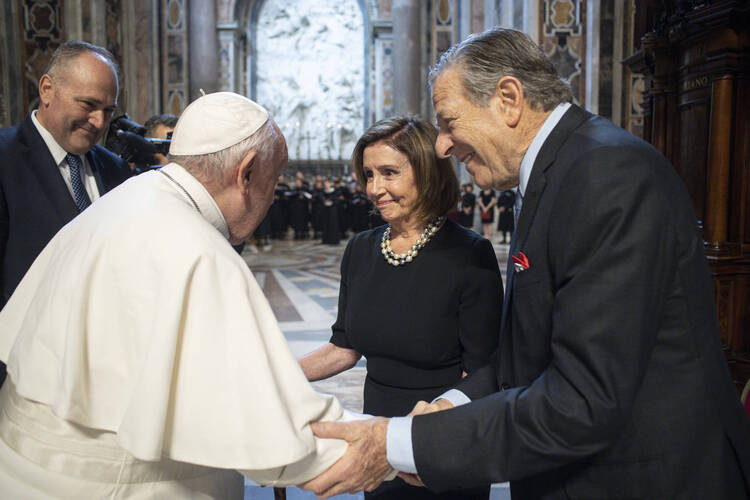 Pope Francis, greets Speaker of the House Nancy Pelosi, D-Calif., and her husband, Paul Pelosi before celebrating a Mass on the Solemnity of Saints Peter and Paul, in St. Peter's Basilica at the Vatican, Wednesday, June 29, 2022. (Vatican Media via AP)

Pelosi attended the morning Mass marking the feasts of St. Peter and St. Paul, during which Francis bestowed the woolen pallium stole on newly consecrated archbishops. She was seated in a VIP diplomatic section of the basilica and received Communion along with the rest of the congregants, according to two people who witnessed the moment.

[Archbishop Cordileone on barring Nancy Pelosi from Communion: ‘I cannot in my conscience allow the situation to continue.’]

Pelosi has done neither. She called the recent Supreme Court ruling removing constitutional protections for abortion an “outrageous and heart-wrenching” decision that fulfils the Republican Party’s “dark and extreme goal of ripping away women’s right to make their own reproductive health decisions.”

And she has spoken openly about the Catholic faith, including at a diplomatic reception at the residence of the U.S. Embassy to the Holy See on Tuesday evening marking Independence Day.

Speaking to a crowd of ambassadors, Vatican officials and other Rome-based Americans, Pelosi noted the Catholic virtues of faith, hope and charity and the important role they play in the U.S. Embassy’s mission.

U.S. House Speaker Nancy Pelosi met with Pope Francis on Wednesday and received Communion during a papal Mass in St. Peter’s Basilica, witnesses said, despite her position in support of abortion rights.

“Faith is an important gift, not everyone has it but it is the path to so many other things,” she told the crowd.

Pelosi met with Francis on Wednesday before the Mass and received a blessing, according to one of the Mass attendees. A photo released by the Vatican showed Pelosi and her husband, Paul Pelosi, greeting Francis off to the side of the basilica.

Francis has strongly upheld the church’s opposition to abortion, and on Wednesday said church leaders must “continue to care for human life.” But in his homily, Francis also instructed the new archbishops to welcome everyone into the church, including sinners, and to not “remain pinned to some of our fruitless debates.”

“So many times we become a church with open doors, but only to send people away, to condemn them,” he said.

After the Mass, Pelosi visited the Sant’Egidio Community, a Catholic charity close to Francis where she met with refugees helped by the group. At an event to award the charity with $25,000 in State Department funding, Pelosi referred to the need to preach the Gospel with actions, not just words.

“So many times we become a church with open doors, but only to send people away, to condemn them,” Pelosi said.

“We had the pleasure of attending Mass this morning with His Holiness and many many many leaders of the church,” Pelosi said. “In the spirit of St. Francis, which is the name of His Holiness and my city of San Francisco, I thank you for preaching the Gospel, sometimes using words.”

Last year, President Joe Biden, another Catholic who also supports abortion rights, said after meeting with Francis that the pontiff told him to continue receiving the sacrament. Biden later received Communion during a Mass in a Rome church that is under the authority of Francis as bishop of Rome.

Pelosi: “In the spirit of St. Francis, which is the name of His Holiness and my city of San Francisco, I thank you for preaching the Gospel, sometimes using words.”

Pelosi’s partaking of the sacrament inside the Vatican during a Mass presided over by the pope was even more significant, and a sign of Francis’ unwillingness to refuse Communion. Francis has described the Eucharist as “not a prize for the perfect but a powerful medicine and nourishment for the weak.”

Asked about some U.S. bishops who wanted to refuse Biden the sacrament, Francis told reporters during an airborne press conference in September that priests shouldn’t be politicians and condemn their flock but should be pastors who accompany the faithful with tenderness and compassion.

The Vatican has not ruled on the specific matter of Communion and politicians supporting abortion in a major teaching document, though the church’s in-house canon law says people in a situation of persistent sin shouldn’t be allowed to receive Communion. It has also issued guidelines for the behavior of Catholics in political life, exhorting them to uphold principles consistent with church doctrine.

The then-head of the Vatican’s doctrine office, Cardinal Joseph Ratzinger — the future Pope Benedict XVI — told U.S. bishops in 2004 that priests “must” deny the sacrament if a politician goes to receive Communion despite an “obstinate persistence in manifest grave sin,” including the sin of consistently campaigning for permissive abortion laws.

Cardinal Ratzinger wrote a confidential letter outlining the principles to U.S. bishops in response to their question about whether to deny Communion to John Kerry, who was the Democratic nominee for president. In the end the bishops ignored Cardinal Ratzinger’s advice and voted instead for the policy currently in place allowing bishops to decide themselves whether to withhold it.