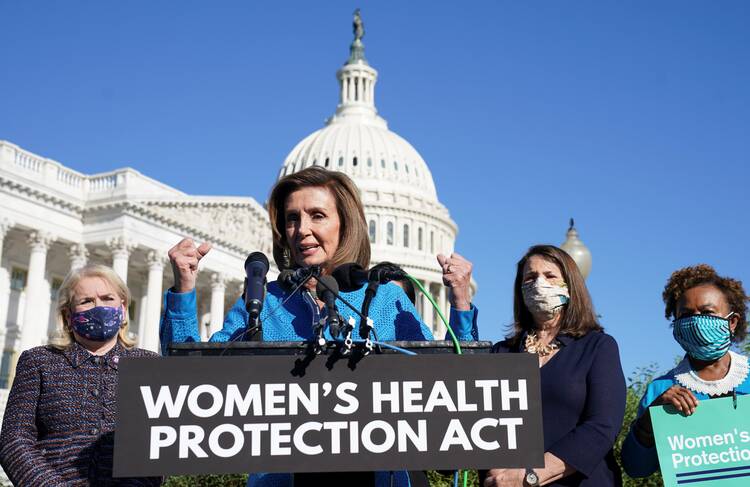 House Speaker Nancy Pelosi, D-Calif., speaks during a news conference on Capitol Hill in Washington Sept. 24, 2021, about the Women's Health Protection Act, which establishes a legal right to abortion in all 50 states under federal law. The measure passed in a 218-211 vote. (CNS photo/Kevin Lamarque, Reuters)

Editor’s note: This is a developing story and will be updated.

Archbishop Salvatore Cordileone of San Francisco is barring Speaker of the House Nancy Pelosi from receiving Communion in his archdiocese. Ms. Pelosi, a life-long Catholic, has recently vowed to codify Roe v. Wade, in order to preserve a legal right to abortion in case the Supreme Court overturns the decision that legalized abortion in the United States.

“Unfortunately, Speaker Pelosi’s position on abortion has become only more extreme over the years, especially in the last few months,” Archbishop Cordileone said in a statement May 20. “Just earlier this month she once again, as she has many times before, explicity raised her Catholic faith while justifying abortion as a ‘choice,’ this time explicitly setting herself in opposition to Pope Francis.”

The archbishop was referring to a statement made by Ms. Pelosi in which she said: “The very idea that they would be telling women the size, timing or whatever of their family, the personal nature of this is so appalling, and I say that as a devout Catholic. They say to me, ‘Nancy Pelosi thinks she knows more about having babies than the pope.’ Yes I do. Are you stupid?”

Archbishop Cordileone said his public declaration comes after numerous meetings over a number of years with Ms. Pelosi, during which he tried to “help her understand the grave evil she is perpetrating, the scandal she is causing, and the danger to her own soul she is risking.” The recent leaked Supreme Court draft that suggested the court is poised to overturn Roe v. Wade had “nothing to do with the timing” of the statement, the archbishop said in an interview with Gloria Purvis, host of America Media’s “The Gloria Purvis Podcast.”

In order to once again receive Communion, Ms. Pelosi must “publicly repudiate her support for abortion ‘rights’ and confess and receive absolution,” the statement said.

In order to once again receive Communion, Ms. Pelosi must “publicly repudiate her support for abortion ‘rights’ and confess and receive absolution,” the statement said. He added that he took no pleasure in issuing the statement and that “Speaker Pelosi remains our sister in Christ.”

Ms. Pelosi has advocated for abortion rights since she was elected to the House of Representatives in 1987. She represents California’s 12th district, which is located entirely within the city of San Francisco. Last year, she advocated for the Women’s Health Protection Act, a federal law which would have legalized the right to abortion on demand at any stage of pregnancy in all 50 states. The measure passed the House in September, but did not pass the Senate.

Last fall, Archbishop Cordileone organized a prayer and fasting campaign for Ms. Pelosi. “A conversion of heart of the majority of our congressional representatives is needed on this issue, beginning with the leader of the House,” he said in a statement Sept. 29. “I am therefore inviting all Catholics to join in a massive and visible campaign of prayer and fasting for Speaker Pelosi: Commit to praying one rosary a week and fasting on Fridays for her conversion of heart.”

In October, Pope Francis received Ms. Pelosi in a private audience. The pope and his senior advisors are aware of Archbishop Cordileone’s approach but do not share it, sources in Rome told America. Less than a month before the private audience, Pope Francis called on bishops “to be pastors, not politicians.”

“I know people will accuse me of being political, but this is not political at all. It’s pastoral,” Archbishop Cordileone told Ms. Purvis. He said Ms. Pelosi’s advocacy for abortion is “becoming more and more extreme and more aggressive,” adding, “I’ve been trying to speak with her about this.

“I want to help her to understand that it is unacceptable to kill babies in the womb and the harm so often it does to women,” the archbishop continued. “Those of us in pastoral ministry, we encounter women who have gone through this experience, and we understand how so often they feel alone, afraid, abandoned. And they really need support and love to help make a happy decision, a decision for life.”

During the interview, Archbishop Cordileone said he had been struggling with the decision to make this statement for some time, saying, “It’s something I really would rather not do.”

“But I just know in my conscience, I have to do something to teach clearly about this evil and that there are solutions to this dilemma we’re in,” he said. Archbishop Cordileone said that a statement delivered by then-Cardinal Joseph Ratzinger to the U.S. bishops, in 2004, helped him arrive at this decision.

“I know people will accuse me of being political, but this is not political at all. It’s pastoral,” Archbishop Cordileone said in an interview with Gloria Purvis.

“He gave us advice on how to approach this, specifically with politicians, Catholic politicians, and specifically on the two issues of abortion and euthanasia,” Archbishop Cordileone said to Ms. Purvis. “And he said we need to meet, to dialogue, to try to move them down the path of conversion. And if after several attempts it comes to the point where it’s clear [that] this is not going to happen, then the bishop or the pastor, [Cardinal Ratzinger] says, is to declare that person is not to be admitted to holy Communion.”

In his statement, Archbishop Cordileone also refers to Pope Francis, including when the pope said that “our defense of the unborn must be clear, firm and passionate.”

“So I’m guided by the principles articulated by Pope Francis and taking the approach of the advice that then-Cardinal Ratzinger gave us,” Archbishop Cordileone said.

Pope Francis has said that he has never denied Communion to anyone. “When the church, in order to defend a principle, acts in a non-pastoral way, it takes sides on the political plane. It has always been so,” Francis said last September on the flight back to Rome from Bratislava. “Be a pastor. Don’t go condemning.”

I’m guided by the principles articulated by Pope Francis and taking the approach of the advice that then-Cardinal Ratzinger gave us,” Archbishop Cordileone said.

Pope Francis, at the same time, affirmed the church’s teaching on abortion. “Abortion is more than a problem. Abortion is homicide,” he said. “Without being ambiguous: Whoever has an abortion kills.”

Bishop Robert McElroy of San Diego, in an essay for America last May, argued against a national policy denying Communion to pro-choice politicians. “It will bring tremendously destructive consequences—not because of what it says about abortion, but because of what it says about the Eucharist,” Bishop McElroy said. “Fully half the Catholics in the United States will see this action as partisan in nature, and will bring the terrible partisan divisions that have plagued our nation into the very act of worship that is intended by God to cause and signify our oneness.”

On the other hand, Archbishop Samuel Aquila of Denver stressed that not every baptized Catholic “can receive Communion if he or she simply desires to do so.”

“None of us have the freedom to approach the altar of the Lord without a proper examination of conscience and proper repentance if grave sin has been committed,” he wrote in an article for America last April. “Because of the public scandal caused, this is especially true in the case of public officials who persistently govern in violation of natural law, particularly in the pre-eminent issues of abortion and euthanasia, the taking of innocent life, as well as other actions that fail to uphold the church’s teaching regarding the dignity of life.”

Archbishop Cordileone acknowledged that his statement would be met by a variety of opinions from other bishops. “Each bishop has to decide in accordance with his conscience in these and other types of situations as well,” he said. “The question is how, pastorally, to respond to these complex situations. And I think we all pretty much respect each other in making decisions because we’re all struggling to form our conscience and discern the right thing to do.”

At numerous points during his interview with Ms. Purvis, Archbishop Cordileone praised Ms. Pelosi for her social justice efforts. “I admire Speaker Pelosi for her advocacy of the poor,” he said. “We’re all together on that. But abortion is different because it involves the direct taking of innocent life.”

He added that Ms. Pelosi has “a wonderful maternal heart.”

“Women in these crisis pregnancy situations need a lot of advocacy,” the archbishop said. “I can’t judge [Ms. Pelosi’s] conscience, but I do believe she’s sincere when she says she’s devout and she speaks so fondly of her five children. I have to believe there’s hope.”

Despite what others may perceive, Archbishop Cordileone said he has no animosity toward Ms. Pelosi. He said he was willing to speak with Ms. Pelosi “if ever, whenever, wherever and however she wishes.”

“I would imagine some people are going to see this as being very heavy-handed and [think] I’m kind of being an ogre here,” he said. “But I cannot in my conscience allow the situation to continue and cause this scandal. And people are getting confused, people are getting upset, and it’s also fueling these flames of polarization and dissension.”

Material from Catholic News Service was used in this story.