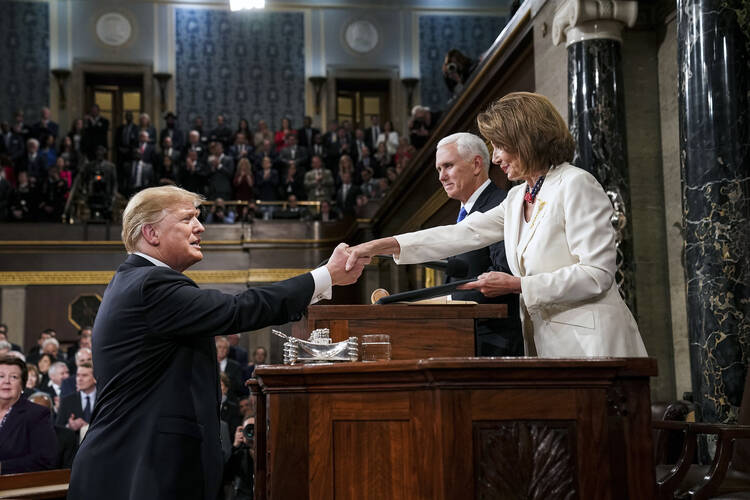 President Donald Trump shakes hands with House Speaker Nancy Pelosi, as he arrives in the House chamber before giving his State of the Union address to a joint session of Congress, on Feb. 5, 2019, at the Capitol in Washington. (Doug Mills/The New York Times via AP)

(RNS) — The political atmosphere in our country has become so toxic that it becomes a news story when the speaker of the House says she does not hate the president.

Pelosi strongly rejected the question, which she saw as an insult to her faith and her upbringing.

Being accused of hatred was, in Pelosi’s mind, the same as accusing her of being a bad Catholic.

“As a Catholic, I resent your using the word 'hate' in a sentence that addresses me,” she said. “I don’t hate anyone.”

Hatred was not part of her upbringing, she said. “I was raised in a way that is a heart full of love.”

Pelosi’s response was founded on Catholic theology and the Gospels. In the Sermon on the Mount, Jesus said, “Love your enemies, and pray for those who persecute you.”

Or as the Gospel of Luke puts it: “Love your enemies, do good to those who hate you, bless those who curse you, pray for those who mistreat you.”

In Catholic theology, you are not supposed to hate anyone, even those with whom you are at war. Yet the word "hate," and its reality, is ever present in American culture. People unite around their common hatreds as much as around their common loves. Political scientists note that it is easier to motivate people to vote through hatred than love.

The day my kids convinced me to pray for President Trump
Michael St. Pierre

If we want better politics, prayer might be a good place to start. We could begin by asking for forgiveness for our hate, and then pray for those with whom we disagree. Being together on our knees before God should remind us that we are all God’s children and we should act like it.