Is a Catholic university still Catholic when the priests, brothers and sisters have left? 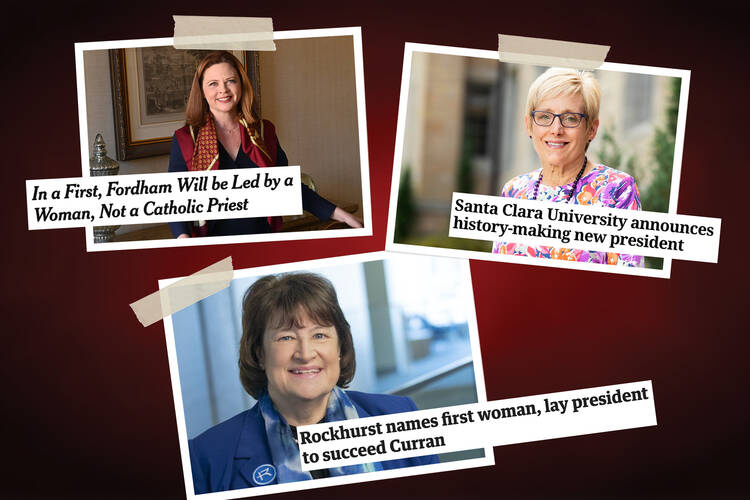 First it was Fordham University in New York. Two weeks later, a similar announcement was made at Rockhurst University in Missouri. The next day, Santa Clara University in California followed suit. Within a matter of weeks, three Jesuit institutions announced they would soon be led for the first time by laypeople, rather than priests or brothers.

The frequency of such announcements from Catholic colleges and universities originally founded by religious orders can make it feel like the transition to lay leadership is sudden. But they are actually part of an accelerated trend in recent decades, with top leadership posts being handed over to lay professionals. As the numbers of priests and consecrated women and men available for ministry at institutions of higher education continue to dwindle, religious orders seek out models that ensure their respective missions and charisms. Still, questions remain about how the empowerment of lay leaders might affect a school’s Catholic identity.

“I think we’re in a period of experimentation right now,” Dennis Holtschneider, C.M., head of the Association of Catholic Colleges and Universities, told America. “This is more than just the downsizing of religious orders. This is at the same time a major shift in how people are identifying with religion, especially among the younger generation.”

Within a matter of weeks, three Jesuit institutions announced they would soon be led for the first time by laypeople, rather than priests or brothers.

In recent years, Pope Francis has called for greater collaboration between lay and ordained leadership in the church’s various ministries. Last month, he issued a new set of rules that opens up the top posts in Vatican departments to laypeople, and he has made strides in appointing more women to staff roles in the Vatican. Here in the United States, the emergence of lay leaders at Catholic colleges and universities is not new and is already widespread.

According to the A.C.C.U., 78 percent of its 188 member institutions, or 149 colleges and universities, are currently headed by a layperson, with more on the horizon.

So for decades, various religious orders have provided training opportunities for lay administrators, faculty and staff, who then help students understand the church’s intellectual tradition and the unique charism of the order under whose auspices it is run.

As the numbers of priests and consecrated women and men available for ministry at institutions of higher education continue to dwindle, religious orders seek out models that ensure their respective missions and charisms.

Twenty years ago, the Sisters of Mercy recognized the declining number of sisters available to minister on their campuses and created the Conference for Mercy Higher Education, part of an effort “to reinforce the bonds of Mercy traditions and to strengthen the Catholic identity and Mercy charism at all colleges and universities.” The goal of the organization is to help its 17 colleges and universities live out the ideals of the Sisters of Mercy, using a peer review mechanism similar to an accreditation process.

The process is designed not as a punitive checkup, but as an opportunity for “affirmation, assessment, support and the celebration of the work at the institution in terms of the Mercy Catholic mission,” Julia Cavallo, the executive director of the Conference, told America. The conference augments the self-assessments the schools undertake and helps institutions focus on characteristics important to the Mercy Sisters, such as hospitality, compassion and a holistic approach to education.

Like many other networks of Catholic colleges and universities, schools associated with the Mercy Sisters are aware that many of their students do not always have strong ties to religious faith.

Younger Americans are significantly more likely not to belong to a faith community than any other age group. According to a survey by the Public Religion Research Institute, the percentage of adults aged 18 to 29 who are religiously unaffiliated rose from 10 percent in 1986 to 36 percent in 2020. Even then, just over half of those young people who are religiously affiliated, the Springtide Research Institute recently found, have “little to no trust” in organized religion.

More than half of young people who are religiously affiliated have 'little to no trust' in organized religion.

In addition to professional development opportunities for faculty and staff, the Conference for Mercy Higher Education hosts events for students, such as social justice advocacy days. And even though many students will never interact with a Sister of Mercy, Dr. Cavallo said the sisters see their lay collaborators as the ones who will continue their mission.

“Many Sisters of Mercy will say to me, ‘You are Mercy now,’” she said. “They see our partnership and our relationship as vital to the continuation of Mercy.”

For the nation’s Jesuit colleges and universities, a similar process of examining an institution’s Catholic identity is available via the Mission Priority Examen. The process is based on the Examen, a brief prayer popular among individuals formed by the spirituality of St. Ignatius Loyola, the founder of the Jesuits, in which one reviews the day, looking for signs of God’s presence.

According to the Association of Jesuit Colleges and Universities, which represents 28 member institutions—at least 23 of which will be led by laypeople beginning next academic year—Jesuit education is marked by “a restlessness that fuels the search for knowledge, meaning, and the reality of God.” The process of examining an institution’s Catholic and Jesuit identity includes self-assessment, visits from leaders at peer institutions and consultations with Jesuit leaders.

Jesuit education is marked by 'a restlessness that fuels the search for knowledge, meaning, and the reality of God.'

A 41-page document explores themes that mark Jesuit higher education; these include the pursuit of faith, justice and reconciliation, promoting an Ignatian campus culture, service to the church and commitment to mission.

“We really are trying to view it as an Examen,” Stephanie Russell, vice president for Mission Integration at A.J.C.U., told America. “It is an opportunity for faculty, staff, students and board members to reflect on the strengths and challenges of their Catholic identity, and Jesuit identity, and to set goals together.”

Though several national networks exist to help schools foster their Catholic identity, individual institutions are also adding staff to explore questions of what it means to be a faith-based university today.

Father Holtschneider said the vast majority of Catholic colleges and universities in the United States turn to mission officers as a resource to look at how the founding ethos of a school is lived out today.

The vast majority of Catholic colleges and universities in the United States turn to mission officers as a resource to look at how the founding ethos of a school is lived out today.

“That’s a really big deal,” he said. “These positions didn’t exist a generation ago and now all of these schools have created a position whose principal job is to worry and think about: How is this corporate culture vibrant and alive here? How do we know we’re doing the work? How are we measuring the work? Are we doing best practices?”

At Edgewood College in Madison, Wis., Milton Javier Bravo seeks to help his colleagues integrate into all of campus life the spirit of the Dominican Sisters of Sinsinawa, who founded the institution in 1927. Today, the sisters are no longer on the faculty or part of the administration, though some keep a presence on campus through other work.

As the school’s first vice president for mission, values and inclusion, Dr. Bravo sees his job as helping the faculty, the staff and the students live the mission of the institution.

Dr Milton Javier Bravo: What does it mean to be an inclusive college environment that is welcoming and serving of all students, particularly historically underrepresented students?

In addition to offering Mass, providing opportunities for service and displaying culturally diverse representations of Catholicism, colleges and universities like Edgewood devote time during the academic year to remember the values of their founders and give students the opportunity to apply them in today’s context. Dr. Bravo said he looks to the Dominican Sisters of Sinsinawa for their continued advocacy on social justice issues like immigration, health care and education as inspiration for helping Edgewood live out its spiritual ethos.

Understanding how the tradition of the sisters’ ministry fuels their advocacy can help faculty and staff at the college implement those values into teaching and programming, Dr. Bravo said.

As the number of priests and religious on the campuses of Catholic colleges and universities continues to decline, with lay professionals increasingly responsible for maintaining a school’s Catholic identity, some people say it is too soon to tell how effective these bodies and measures will be.

“The jury’s out,” Father Holtschneider said. “But there’s a lot of activity and a lot of creativity, and people are trying to find their way.”

Sarah Vincent and Doug Girardot contributed to the reporting of this story.