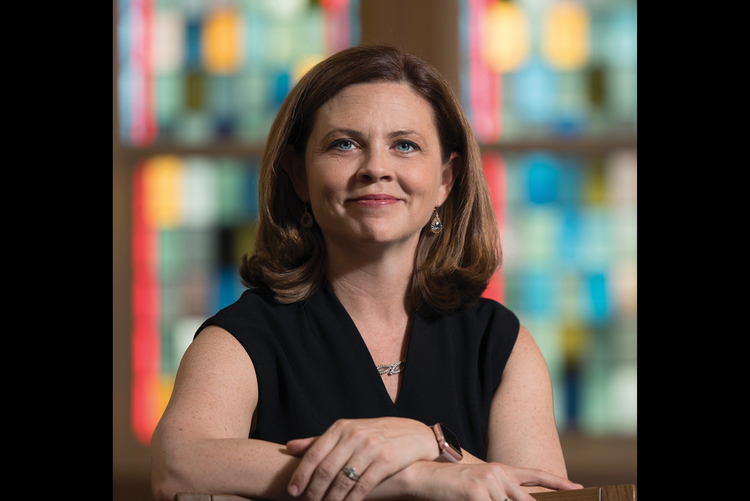 Tania Tetlow, who in 2018 became the first woman and first layperson to serve as president of Loyola University New Orleans, was appointed the next president of Fordham University in New York.

Tania Tetlow, who in 2018 became the first woman and first layperson to serve as president of Loyola University New Orleans, is set to repeat history. A Harvard-trained lawyer and former federal prosecutor, Ms. Tetlow on Thursday was appointed the next president of Fordham University in New York. The news was made public in an email Ms. Tetlow sent to the Loyola University New Orleans community. It will be the first time the 181-year-old Jesuit university is not led by a priest.

Ms. Tetlow will succeed Joseph M. McShane, S.J., who has led Fordham since 2003. During Father McShane’s tenure, he oversaw more than $1 billion in fundraising and led the university through a construction boom and increase in enrollment.

“Tania Tetlow has in abundance the qualities of leadership one needs to run a major university, among them discernment, patience, decisiveness, self-awareness, and magnanimity,” Father McShane said in a press release. “Her commitment to Jesuit pedagogy and to Fordham’s Jesuit, Catholic mission is both deep and well-informed. I shall rest easy with her in the office I have occupied for almost two decades.”

Tania Tetlow, who in 2018 became the first woman and first layperson to serve as president of Loyola University New Orleans, is set to repeat history.

“I have made the very difficult decision to step down as president of Loyola this summer to become the first lay president of Fordham University in New York,” Ms. Tetlow wrote.

“When Fordham first called, I gave them a quick no,” she continued. “But I have spent much prayerful discernment deciding whether my responsibilities are to this institution and this city, or to Jesuit higher education and the world more broadly. As the problems of the world seem ever more urgent every day, I have decided it is the latter.”

At Loyola, Ms. Tetlow shepherded the school through deep financial challenges dating back to 2012. After years of deficit spending and a decline in enrollment, a higher education accrediting agency had placed Loyola on financial probation in 2018. As president, Ms. Tetlow completed a $100 million fundraising campaign and the university saw an increase in enrollment, bringing to an end its probationary period in 2019. Last summer, the university began construction on a new $6 million chapel and multi-faith student services building.

Loyola made headlines when administrators announced in 2020 that it would not take SAT or ACT scores into account when making admissions or financial aid decisions, focusing instead on other marks of student success.

“Like most institutions, we understood that G.P.A.s are a better and more fair predictor of success,” Ms. Tetlow told The New York Times. “At a moment when students literally couldn’t take the standardized tests, it felt like the right moment to be brave and make a change.”

Tania Tetlow told the Associated Press in 2018 that she comes from “a family full of Jesuit priests.”

A former assistant U.S. attorney, Ms. Tetlow began her career in higher education at Tulane University in New Orleans, where she taught law, served as provost and eventually became a senior vice president before moving to nearby Loyola. With deep roots in New Orleans, Ms. Tetlow advocated on behalf of domestic violence and sexual assault victims, led the New Orleans Library Board and Foundation following Hurricane Katrina and has been a member of the Ignatius Chapel Choir since 1995.

Ms. Tetlow’s parents taught at Loyola University, and she said she practically grew up on the campus, attending Mass on campus with her family since she was 6 years old. Ms. Tetlow told the Associated Press in 2018 that she comes from “a family full of Jesuit priests.” One of those Jesuits, Joseph Tetlow, S.J., told America in 2019, “My guess is that she has heard at least 10,422 Jesuit homilies.”

In her email to the Loyola community, Ms. Tetlow noted that her parents met as graduate students at Fordham and that she was born in New York.

She said that religiously affiliated schools must learn to articulate their values in order to “stand out in the market. It’s who we are and what we do. So it really matters to get it right.”

At a press conference Thursday, Ms. Tetlow said serving as the first lay president at Loyola presented her “an opportunity to remind everyone that given the waning number of priests among us that we have to own the mission as lay people, or else we will lose it.”

She said that religiously affiliated schools must learn to articulate their values in order to “stand out in the market. It’s who we are and what we do. So it really matters to get it right.”

Ms. Tetlow said in a 2019 interview with America that focusing on a school’s Jesuit values is important, especially as fewer priests are available to hold campus roles.

“There is no substitute for the transformative power of Jesuits in the classroom or in student life,” she said. “In terms of how we handle that, it’s got to be about formation.”

Asked about her priorities for Fordham, Ms. Tetlow said that she hopes to expand the pool of applicants as the number of college-age individuals living in the northeast shrinks and to make sure potential students know about the opportunities that come with attending college in New York.