The Catholic Church belongs to all of us. It’s time to #OwnYourFaith. 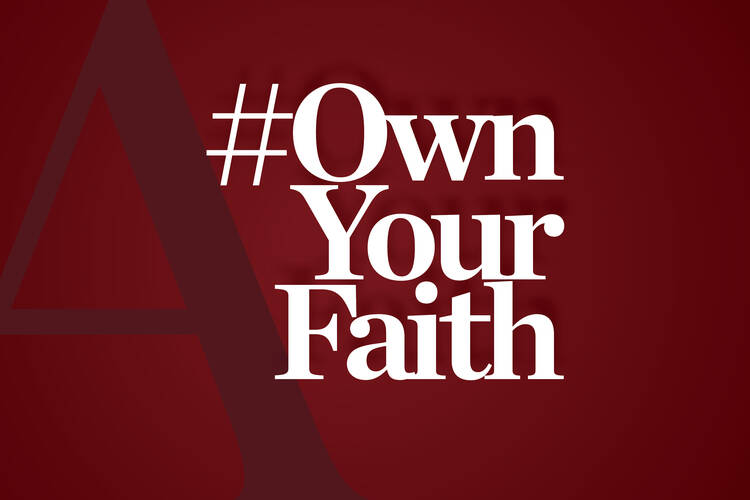 When John Wynne, S.J., opened the first office of America in 1909, he had a simple yet daring vision: to create a media ministry that would give Catholics a voice in the public debate of the United States. That’s why he called it America. Over the course of a Great Depression, two world wars, eight papacies, 20 presidencies and countless more events in the church and the world, America became one of the most celebrated Catholic journals in the English-speaking world.

Yet relatively few people heard about it.

Like much of the Catholic media, for more than a century America did not conduct marketing beyond the occasional direct mail effort. We certainly did not make any big, national effort to get the word out. We relied on word of mouth and friendly relations—for example, with the network of Jesuit schools, which often made America required reading for most of their students. For a number of reasons—starting with the realities of publishing in a digital age—those strategies are no longer practical or effective. It’s past time to make a more organized and concerted effort to let people know about this amazing resource.

In many ways the news and analysis America provides are needed now more than ever. That might seem strange to say, given the precarious position of organized religion in the contemporary United States. The decline of religious affiliation is the result of myriad factors, but it certainly includes the tendency of organized religions to take their appeal for granted and not properly “market” themselves or, in Christian theological terms, evangelize.

Among baptized Catholics, many people feel the church has failed to engage them, failed to listen to their questions.

Among baptized Catholics, many people feel the church has failed to engage them, failed to listen to their questions and failed to live up to the ideals it professes. They have decided to walk away. But even among those who remain in the pews, there are questions and challenges.

And yet how many Catholics, practicing or otherwise, are even aware of the existence of the Catholic media, of publications like America whose mission is to accompany them through that questioning, to help them make sense of events in the church and the world? A smart, Catholic take—one that looks with a critical and well-trained eye at the events of the day, from elections to Netflix specials to Vatican news—is a perspective that many Catholics simply do not know exists.

We are going to change that.

This month, for the first time in its history, America is launching a groundbreaking national marketing campaign. We’re calling it #OwnYourFaith.

When you come across this campaign—on social media, on city sidewalks, in places like The Wall Street Journal—you’ll find us proposing questions for dialogue: the same questions most Catholics are asking, the issues at the heart of the national and ecclesial conversation. I believe that the church—and the country—are better off when we are free to wrestle with the most pressing issues of the day, unbound by ideological traps or that nagging sense that we are not supposed to ask difficult or controversial questions in church. I know that you, as a committed America reader, believe in a vigorous conversation too. With this marketing campaign, we’re betting that there are millions of Catholics who also believe in that but have not yet heard about America.

I believe that the church—and the country—are better off when we are free to wrestle with the most pressing issues of the day, unbound by ideological traps.

Why #OwnYourFaith? Because the Catholic Church belongs to all of us, even though it may not always feel that way. This great gift is not just your parish priest’s church, not only Father Matt Malone’s church, not just the U.S. bishops’ church, but Christ’s church and therefore yours. It is through him, with him and in him that we share a common baptism.

Many of you reading this have supported the mission of America for years, even decades. The loyalty of our subscribers and benefactors is our most precious gift. And we owe it to you to put in the time and resources required to make this work available to many more people and to hand it on to a new generation. The issues facing our nation and our church—the very questions we wrestle with at America—are too important not to.

And so I ask you to join us in this unprecedented effort. Is there someone in your family, your workplace or your parish who would appreciate a smart, Catholic take on politics, faith and culture? It’s time to tell them about America. Tell them in person, or with a quick text or email, about why you read and subscribe to America. Pass along an article, an issue, a podcast, a video about something that made you think or gave you hope.

While we’ve tapped the smartest and most dedicated staff in publishing to craft this marketing campaign, we know that our greatest resource in spreading the word is you. Thank you.