I’ve lived under Donald Trump and Fidel Castro. Both taught me the importance of defending truth. 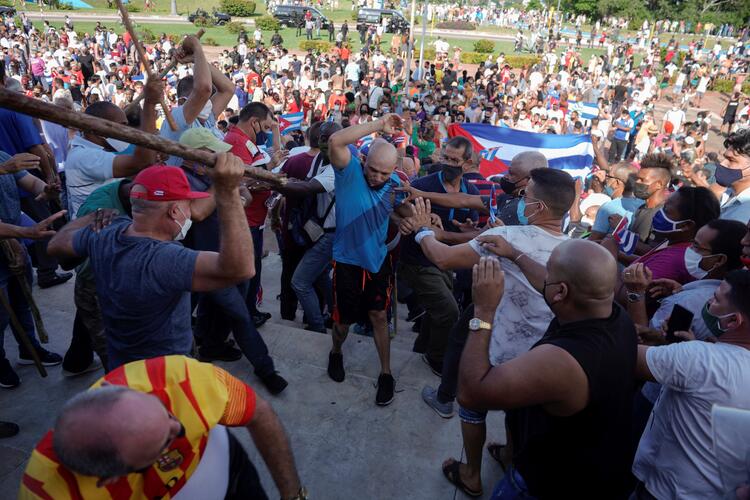 People clash with plainclothes police during protests in Havana on July 11, 2021. Thousands of Cubans took to the streets to protest a lack of food and medicine as the country undergoes a grave economic crisis aggravated by the Covid-19 pandemic and U.S. sanctions. (CNS Photo/Alexandre Meneghini, Reuters)

¡Cuidado con el coco! This warning about a mythical character, never seen but feared, was a staple of childhood in Cuba. A boogeyman, el coco kept us in line by making us afraid of the unknown. But I was also taught that there was another threatening creature, a real one: The United States was the ultimate el coco, whose big toothy shores wanted to devour our island. Fearing it would keep us in line.

But recently many Cubans have dared to cross that line, gathering for protests over a lack of food and medicine, rising prices and the government's handling of the Covid-19 pandemic. But the cries of the community have gone deeper, asking for basic freedoms in a desperate bid for the world’s attention. Artists, writers, musicians and journalists who have dared to speak publicly have been swiftly taken by security forces, their whereabouts unknown. Internet service has been shut down. The protests, which began in small towns and spread throughout the country, are a rare sight in a country in which unauthorized public gatherings are illegal and have been met with swift crackdowns.

Elementary school in Fidel Castro’s Cuba was a strange place where history began with Christopher Columbus, moved ahead centuries to Cuba’s independence from Spain and then moved straight to “La Revolución.” Our other subjects included Marxism-Leninism (yes, in elementary school) and rigorous physical exercise in the Soviet model, a propaganda tool on the world’s stage. Our teachers came to school in army fatigues to underscore how under siege our country was from the imperialist power to the north and the dissidents within. Communist party affiliation was required for jobs and disclosed at school by each child. Those who were young communists wore an official blue and white bandana with their school uniform—pioneros on the front lines of the fight for a new world order.

My childhood in Cuba made me prize critical thought. It also made me aware that extremism for the sake of power results in the erosion of truth and agency.

I refused and was often sent to the “inspector,” especially when I dared wear my religious medals. Yet, paradoxically, I was their star pupil trotted out in assemblies to read speeches prepared for me, which I then stomped on when I left the stage. I learned we could not speak of faith, my church was drowned out by loudspeakers while we tried to pray, and Christmas was outlawed, remaining alive only in memories.

The rise of the Catholic Church in Cuba
Tim Padgett

This was my childhood. It made me prize critical thought and truth-telling as fundamental human rights. It also made me aware that the extremes meet in the end and that whether on the left (as in Cuba) or on the right (as in Trumpism), extremism for the sake of power results in the erosion of human thought, truth and agency. The Gospel I believe in stands up against lies, wherever they come from, and against anything that assails the common good. These are not values shared by either extreme.

At the height of the pandemic, I asked someone to please mask up or move away, only to hear them cry, “It’s a free country!” People who have no idea what it is to have no freedom under a brutally repressive regime bandy about phrases like this. It is insulting. It is ignorant. It is the outcome of a world in which ideologies no longer mean anything and at the same time have intensified and appear to mean everything. Pope Francis is called a Communist because he dares speak about the poor and the environment. Communist China has one the most virulent forms of capitalism on the planet and victimizes both the poor and the environment.

When young people in Cuba today shout “Libertad!” (wearing masks and desperate for vaccines, which many “free” U.S. citizens refuse to take), their cry is about their most basic survival as human beings, the need for food and medicine. It is about being lied to their entire lives, about the grinding reality of being unable to even express one’s thoughts for fear of one’s life. To protest in the streets is to brave imprisonment or death. As one eloquent young man put it on a widely shared video, “We are starving while they build hotels.”

It is possible that this man already has been identified and imprisoned, the brutal repression we always knew awaited the person engaging in any act of defiance. But notice the contradiction: They are building hotels while the people starve. This is the truth no one wants to talk about because the powerful on the left and on the right benefit from it. A truly communist country would not build tourist hotels—that’s capitalism. A truly democratic country would not pass voter suppression laws like those being sponsored by Republican legislatures; that is undemocratic and dangerous.

We now live in a post-ideological world where improbable ideology reigns supreme as a weapon in building power.

We now live in a post-ideological world where improbable ideology reigns supreme as a weapon in building power. The only defense we have against this is truth arrived at by being willing to embrace complexity. Yes, Cuba has a horrible, repressive, left-wing dictatorship. Yes, the right-wing dictatorship that preceded the revolution was also horrible and propped up by the United States, as in many other places. Yes, Cuba imprisons its thinkers and intellectuals for telling the truth. Yes, we in the United States have stopped listening to ours. All of these are yeses.

The majority of Cuban-Americans in the United States sold themselves to Trumpism because he waved el coco of socialism at them. But in 2020, Donald J. Trump lost. The threat of the United States under a Biden administration will not stoke the same fears in Cuba. This is the greatest hope I have. There is no coco to scare the Cuban people with anymore.

When Pope Francis brokered a rapprochement between the United States and Cuba in 2014, he knew exactly what he was doing: Take away el coco, deal a blow to the Cuban propaganda machine, bring about relations people to people. Undo the false ideological labels. Help all. I hope that those of us who live in the world of both/and truth-telling will prevail across the 90 miles that separate us. If we focus on the truth of the common good in Cuba, here and everywhere, then the path is clear. Adiós, el coco.