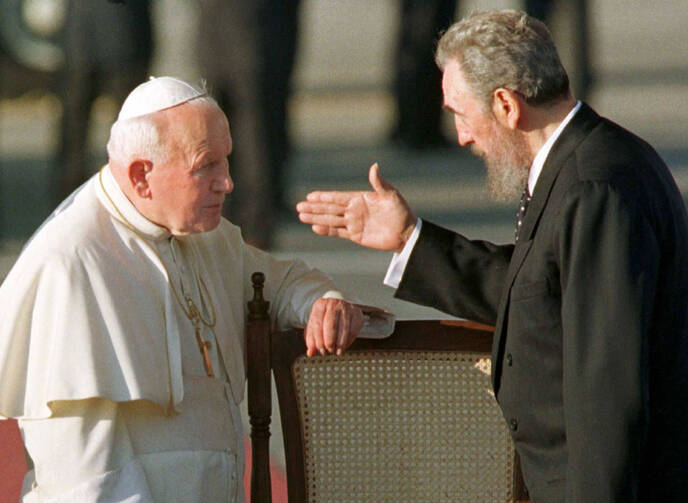 American Alan Gross has been released in an apparent exchange with Cuba that has allowed the United States to proceed with a historic normalization of relations with Cuba after decades of hostility, suspicion and economic embargo that has previously been lamented by Vatican officials as unproductive and harmful to the people of Cuba. The historic shift is the culmination of 18 months of secret talks between the United States and Cuba in Canada, and a pivotal meeting in the fall at the Vatican, senior administration officials told national media. The October meetings between U.S. and Cuban negotiators were apparently facilitated by the Holy See, and Pope Francis personally sent letters to Castro and Obama encouraging the dialogue. During televised remarks explaining the diplomatic breakthrough to astonished Americans, President Obama said, "I want to thank His Holiness, Pope Francis, whose moral example shows us the importance of pursuing the world as it should be, rather than simply settling for the world as it is."

After historic visits to Cuba by both Pope Benedict XVI and St. John Paul II, Vatican and Cuban relations had been steadily improving in recent years, allowing an opening for Vatican diplomats to assist in the breakthrough. There have been other recent signs of improving relations with Cuba. In October the Castro government allowed plans to go forward for the construction of the first new Catholic church on the island nation in 55 years. Last January, Secretary of State John Kerry, meeting with Vatican Secretary of State Cardinal Pietro Parolin in Rome, had requested the Vatican’s assistance in freeing Gross.

Gross, 65, was arrested by Cuban authorities in 2009 and had been serving a 15-year sentence for bringing satellite communications equipment to Cuba as part of his work as a State Department subcontractor. His "humanitarian" release by Cuba was accompanied by a separate spy swap as U.S. officials released three Cuban intelligence agents convicted of espionage in 2001. Cuba also freed an unidentified U.S. intelligence “asset,” jailed in Cuba for more than 20 years.

The Holy See's active role in the process was confirmed by a communique issued by the Vatican:

"The Holy Father wishes to express his warm congratulations for the historic decision taken by the Governments of the United States of America and Cuba to establish diplomatic relations, with the aim of overcoming, in the interest of the citizens of both countries, the difficulties which have marked their recent history." According to the Vatican statement in recent months, Pope Francis wrote letters to both presidents Raúl Castro and Barack Obama, inviting them "to resolve humanitarian questions of common interest, including the situation of certain prisoners, in order to initiate a new phase in relations between the two Parties."

The Holy See also confirmed that it received delegations at the Vatican last October and "provided its good offices to facilitate a constructive dialogue on delicate matters, resulting in solutions acceptable to both Parties." The statement concludes: "The Holy See will continue to assure its support for initiatives which both nations will undertake to strengthen their bilateral relations and promote the wellbeing of their respective citizens."

The White House issued a statement this morning, announcing the policy shift on Cuba and detailing next steps, which will include the reopening of a U.S. embassy in Havana and a rapid loosening of commerical and travel restrictions: “Today, the United States is taking historic steps to chart a new course in our relations with Cuba and to further engage and empower the Cuban people. We are separated by 90 miles of water, but brought together through the relationships between the two million Cubans and Americans of Cuban descent that live in the United States, and the 11 million Cubans who share similar hopes for a more positive future for Cuba.

“It is clear that decades of U.S. isolation of Cuba have failed to accomplish our enduring objective of promoting the emergence of a democratic, prosperous, and stable Cuba. At times, longstanding U.S. policy towards Cuba has isolated the United States from regional and international partners, constrained our ability to influence outcomes throughout the Western Hemisphere, and impaired the use of the full range of tools available to the United States to promote positive change in Cuba. Though this policy has been rooted in the best of intentions, it has had little effect—today, as in 1961, Cuba is governed by the Castros and the Communist party.”

The administration statement argues that “we cannot keep doing the same thing and expect a different result.

“It does not serve America’s interests, or the Cuban people, to try to push Cuba toward collapse. We know from hard-learned experience that it is better to encourage and support reform than to impose policies that will render a country a failed state. With our actions today, we are calling on Cuba to unleash the potential of 11 million Cubans by ending unnecessary restrictions on their political, social, and economic activities. In that spirit, we should not allow U.S. sanctions to add to the burden of Cuban citizens we seek to help.”

The White House insisted that steps toward ending the isolation with Cuba and restoring diplomatic and economic ties with the one-party state would not diminish U.S. insistence on improving human rights conditions in Cuba: “A critical focus of our increased engagement will include continued strong support by the United States for improved human rights conditions and democratic reforms in Cuba. The promotion of democracy supports universal human rights by empowering civil society and a person’s right to speak freely, peacefully assemble, and associate, and by supporting the ability of people to freely determine their future. Our efforts are aimed at promoting the independence of the Cuban people so they do not need to rely on the Cuban state.”

Bishop Oscar Cantú of Las Cruces, New Mexico, chairman of the Committee on International Justice and Peace of the U.S. Conference of Catholic Bishops welcomed the announcement of Gross's release and the mutual prisoner exchange between the United States and Cuba as well as the announcement of improved relations between the two cold war adversaries. "Our Conference has long held that universal human rights will be strengthened through more engagement between the Cuban and American people," the bishop said. "For decades, the U.S.C.C.B. has called for the restoration of diplomatic relations between our nations. We strongly support the review of Cuba’s designation as a State Sponsor of Terrorism.

"We believe it is long past due that the United States establish full diplomatic relations with Cuba, withdraw all restrictions on travel to Cuba, rescind terrorist designations aimed at Cuba, encourage trade that will benefit both nations, lift restrictions on business and financial transactions, and facilitate cooperation in the areas of environmental protection, drug interdiction, human trafficking and scientific exchanges. Engagement is the path to support change in Cuba and to empower the Cuban people in their quest for democracy, human rights and religious liberty."

With the issue of the restoration of diplomatic relations moving forward, one vexing "Cuban" problem remains, the fate of the prison at Guantanamo Bay. President Obama has made closing the prison a key goal of his final years in office. Can he again turn to Pope Francis for help? Just two days ago the subject of the prison was raised at the Vatican by Secretary of State Kerry during a meeting with the Vatican Secretary of State, Cardinal Parolin. Kerry expressed a desire for the Holy See’s assistance in “seeking adequate humanitarian solutions” for the closure of the GITMO facility. Uruguay recently agreed to accept six detainees from GITMO who had been cleared of any involvement in terrorism after years of imprisonment. It is not inconceivable that this Latin American pope could twist some other arms in his home hemisphere to allow resettlement of some of the other remaining prisoners at GITMO.