Cuban-American families were torn apart by this election. 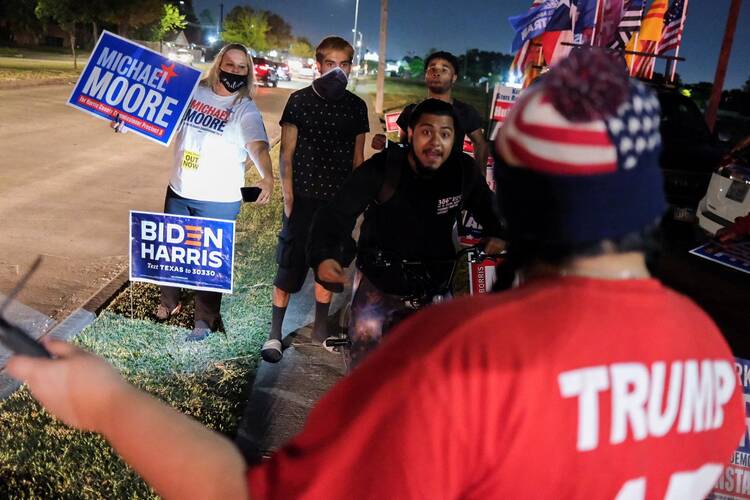 You might be surprised to find out that “Do not fear” is the sentiment most often mentioned in our Sacred Scriptures. Why is that? Why did the prophets and evangelists make God’s power over fear a central message? Perhaps it is because there are terrible consequences to human communities when we let fear win.

In our home you can hear multiple accents as we call out to each other asking where the dog is, or who ate the very last pastelito. We are a mixed family, with grandparents and parents who are Cubanos, Venezolanos, Nicaraguanses, caring for our Estadounidense kids. We often discuss the tragedies of the lands of our parents, the devastating leftist dictatorships: Castro, Chávez, Maduro, Ortega and their ties to one another. It is a still-fresh wound for our elderly parents, but one that together we have learned to discuss and to try to heal.

The political divisions among those to whom outsiders refer as Latinos have been brought to a boiling point by Trumpism.

Fear abhors questions and complications; it thrives on a simplified world where stories are reduced to good guys versus bad guys, saintly systems versus evil guerrilleros, far left versus far right. Such binary thinking is not reality but a distortion, which works well for the would-be dictators on the far left or the far right. Reality is much more complicated, nuanced, overlapping, contested. As a family, we are learning to deal with this complexity, but it takes work and commitment and a willingness to face a history that is far from innocent. Right-wing dictatorships and oligarchies created the fertile spaces where leftist insurrections incubated: there are causes; there are effects; it is all painful. Our blood cries out with the pain of multiple conquests, racism, violence and revolutions.

The same is true of the United States. It is just that on this side of the border we are unwilling to face it. Throughout the entire hemisphere the list of our sins is long, and a clear-eyed look at it would do us good.

We often discuss the tragedies of the lands of our parents, the devastating leftist dictatorships: Castro, Chávez, Maduro, Ortega.

As I have read messages from many Cuban-Americans of my generation, there has been heartbreak and disbelief. People’s families are being torn apart by accusations of being comunistas lobbed against anyone who dares support Democratic candidates. In our community there is no greater insult, no swifter way for everything to devolve into a shouting match that ends tragically in severed relationships. Why is this happening?

As with many other divisions that were simmering just underneath our social interactions, the political divisions among those to whom outsiders refer as Latinos have been brought to a boiling point by Trumpism. I use the word Trumpism intentionally, and I think this distinction is important. Immigrants fleeing Communist Cuba were encouraged and courted by Republicans. The Kennedy administration had failed them (yes, that is still a thing), and thus Democrats were never to be believed. To be a Republican was a way to visibly guarantee your non-Communist credentials in a community where trust had been destroyed. In high school I was told I should not like the plays of Arthur Miller (I did) because he was a “Communist.” I was told I should not call myself a Latina; I was a Cubana. I was told all of life was about fighting Castro, exposing Communists; everything was reduced to “us” and only to “us.”

I was lucky to have these beliefs destabilized when I went to a great Catholic university through the generosity of multiple scholarships. I remember writing a note to the financial aid office thanking them for the Chicano Leadership Grant I had received but clarifying that I was not Mexican-American. They said they knew that; the grant was mine; I was Latina.

This was the consciousness-raising beginning of a journey that many of us have to take, and many of us refuse to take: to move from a narrow nationalism, where being Cuban, or Venezuelan or Nicaraguan is what defines us, to the kind of solidarity that binds us to the suffering and displacement of so many others. In accepting this new expansive identity, we are called to solidarity with Central Americans fleeing devastation and violence, Mexicans who have crossed the border for generations or had the border cross them, families from the entire complicated American continent who have come North, the way European immigrants crossed the Atlantic generations before. This is the shared story of Latinidad that the politics of fear discourages us from experiencing; this is the kinship that binds me to the other in love.

This election is forcing us to “sacar los trapos sucios,” bring out our dirty laundry.

This election is painful in many ways, but most centrally because it is forcing us to “sacar los trapos sucios,” bring out our dirty laundry. My Cuban community has some virulent racist members. These same people subscribe to a Cuban nationalist agenda that conflates “American” might and military power with keeping “Communism” in check and someday defeating it. Never mind that the Soviet Union imploded decades ago. Never mind that one of the most successful “Communist” regimes is China, a merciless and opportunistic capitalist dictatorship. Trumpism’s propaganda machine banked on stoking fear and blindness. If we see that the left-right ideologies and geopolitical structures of the 1960s are no longer operative, the politics of fear will lose its power over us. Because of Trumpism, great Cuban-American artists and thinkers are being humiliated and vilified as Communists. Perhaps I will be too for writing this, but the truth demands we speak up.

The Latino vote is (still) not monolithic. We shouldn’t be surprised.
J.D. Long-García

In this name-calling and Trump strong-man worship that has overtaken some members of Cuban, Venezuelan and Nicaraguan communities, what is most tragic to me as a Catholic theologian is that we have destroyed the foundations of the Gospel and its power to speak to our world. Let me say that again. By agreeing to call Communist and ostracize those who work for human rights, fight for racial justice, advocate for the poor, defend the vulnerable immigrant and protect the environment, we have allowed these most fundamental Gospel values to be claimed by a distorted version of “Communism” that exists only in Trumpism’s propaganda machine. Pope Francis has been called a Communist and a socialist; in this act the Gospel and Catholic social teaching are essentially erased.

As I write this, we do not know the outcome of this election. On our dining room table burns a candle with an image of St. Joseph holding the Child Jesus. We have asked for his intercession, San José, who like us had to flee with his young family, escape to other lands where political forces could not pursue them. In our yard a Vote for Biden sign stands next to a sign that proclaims, “We stand with immigrants and refugees” as an act of our Catholic faith. This is a moment of reckoning and maybe, just maybe my generation of Cubans and our children will begin making the right choices to stand in solidarity, to love our neighbor and to not allow fear to have the last word. This is the moment for us to knit together our differences and complicated stories into an expansive Gospel-brimming love of neighbor that proclaims loudly: Let us be familia.