The rise of the Catholic Church in Cuba 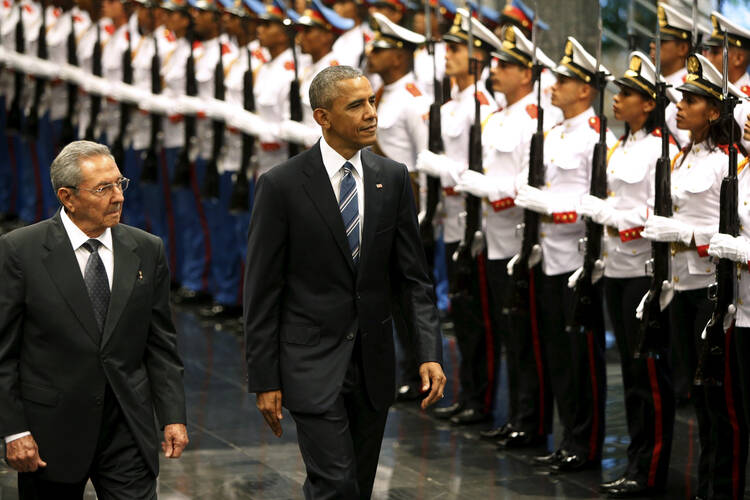 March 20—the day Barack Obama arrived in Havana for his visit to communist Cuba, the first by a U.S. president in 88 years—was Palm Sunday.

A few hours before Obama landed, dissident groups held a human rights demonstration outside the Santa Rita Roman Catholic Church. As  usual, police swooped in and arrested about 50 of the protesters.

As I and other journalists watched the dissidents being  hauled away, I registered the religious significance of the day and location. It was a reminder that the Catholic Church wields little of the pro-democracy clout in Cuba that it once demonstrated in Eastern Europe.

Even before Fidel Castro’s revolution gutted the Cuban church in the early 1960s—sending some 3,500 priests and nuns into exile—the island was no Poland. Its largely Catholic population had not been particularly devout; in fact, Spanish colonial abuses had spawned a good deal of lingering anticlerical sentiment.

Yet, starting with St. John Paul II’s visit to Cuba in 1998, the Cuban Catholic Church has made a remarkable comeback, as witnessed by Pope Francis’ visit last fall. If truth be told, it has become Cuba’s only real alternative institution to the revolution itself.

But because the church still does not have the popular support to challenge the Castro regime on a political level, it has carved out a democratic reform niche in the economic sphere. It is vying with Communism by teaching Cubans capitalism.

It does so largely with the blessing of Cuba’s president, Raúl Castro. Since taking over for his brother Fidel a decade ago, Raúl Castro has had to permit the emergence of a private sector in order to salvage Cuba’s sinking economy. But his Marxist education apparatus is not exactly set up to instruct in the art of private business start-ups.

So he has let the Catholic Church fill that job. The results have been impressive.

More than half a million Cubans are now cuentapropistas, or self-employed private business owners—their enterprises ranging from hair salons to small companies that make furniture. They account for almost a quarter of Cuba’s economy today and employ almost a third of the workforce. Some, like Rubén Valladares, whose Havana company Adorgraf makes personalized paper bags, count the Cuban state among their customers.

“It feels good to be an example of change,” Valladares, who employs 25 people, told me at his modest but humming workshop.

Valladares is among the large share of Cuban entrepreneurs trained in clases de liderazgo, leadership classes, by church projects like Cuba Emprende. Run out of the church-operated Felix Varela Center in picturesque Old Havana, Emprende offers courses in just about every aspect of small business ownership.

This includes business ethics. A non-Catholic woman entrepreneur taking liderazgo classes in the eastern city of Santiago once remarked to me that “the church brings a moral framework that is sometimes missing as we struggle to get by in our daily economic lives here.”

Its reach is expanding. Valladares’ 25-year-old daughter, Mairene just received her Emprende diploma and was selected to take part in a new business training program for Cubans this summer at Florida International University in Miami.

“We’re the future of business in Cuba,” she says.

She might also have said the future of Cuba itself—and that does worry the island’s more hardline communist leadership.

In 2011, for example, the Cuban church partnered with a Spanish university to offer that iconic capitalist degree, the master’s of business administration. But after two years and 100 graduates, it was shut down—largely, say those familiar with the program, because its popularity discomfited the government.

Still, that government needs Cuban entrepreneurs—and so does President Obama. His project to normalize relations with Cuba and more effectively influence democratic change there, depends to a large degree on the cuentapropistas’ success. He sees them, in effect, as a new kind of dissident, one whose economic independence undermines communist control.

That is why, during his Havana visit, he and his family ate at a paladar, or privately owned restaurant; why he called for an end to the U.S. trade embargo; and why, after the disappointing scene on Palm Sunday, he gave a shout-out to Cuba Emprende in his speech on Monday of Holy Week.