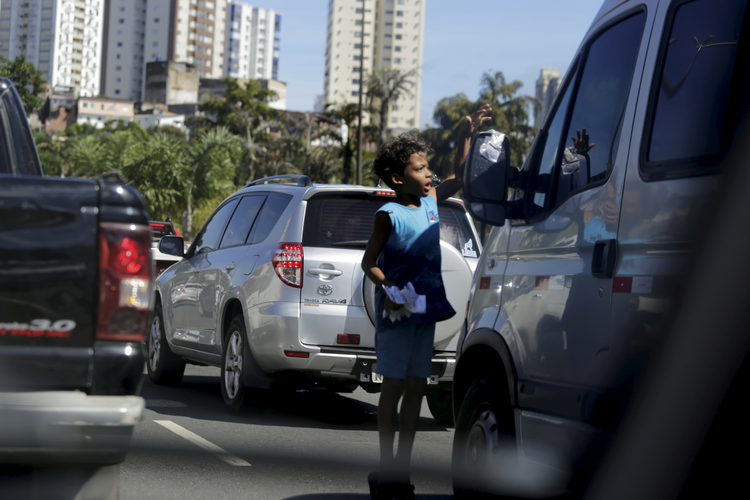 A street child in Salvador, Bahia in Brazil in May 2019. iStock photo.

As the economic crisis intensified by the Covid-19 pandemic drives higher unemployment and extreme poverty in Brazil, more and more children have been forced to live on the streets of large cities.

Social service workers and agents from Catholic ministries estimate that the number of homeless children and teenagers on Brazil’s streets now certainly exceeds 100,000; that is 30,000 higher than the 70,000 estimated by a World Vision survey in 2019.

“In every large city in Brazil, you can now see a greater number of kids begging for money or selling candy on the streets than before the pandemic,” Maristela Cizeski, a member of the Children’s Pastoral Ministry for the Brazil bishops’ conference, told America.

Most of them are members of families who have been evicted from rented houses and now live under bridges or in improvised tents in municipal squares, she said. “Most already worked to help their parents before the pandemic. Most are out of school, and we fear they may never come back,” she said.

“In every large city in Brazil, you can now see a greater number of kids begging for money or selling candy on the streets than before the pandemic.”

The Franciscan Solidarity Service (known by its Portuguese acronym Sefras) has expanded its operations over the pandemic year to distribute thousands of hot meals every day for homeless people in São Paulo and other cities. Its coordinators report that more people now bring their children with them to the food distributions.

“That’s how we can confirm that there are more children on the streets now. Unfortunately, there’s no reliable official data on that situation,” Sefras advocacy coordinator Fábio Paes said.

The lack of official data reflects a general governmental negligence regarding the problem. Without adequately monitoring homelessness among children, the government repeatedly fails to secure their most basic human rights, Mr. Paes said.

“The vulnerability of a child on the street is manifold. Without places where they can find protection, like a school, a child is not only exposed to abuse but is also unable to denounce them,” he said.

Hunger is the most obvious problem for street children. The 2019 World Vision study reported that at least 20 percent of Brazil’s homeless kids go to sleep without eating. Now things are certainly much worse, Ms. Cizeski said.

“Many poor children would go to school in order to eat. Now the schools are closed due to the pandemic. Many homeless kids have lost contact with them, anyway,” she explained.

Without adequately monitoring homelessness among children, the Brazilian government repeatedly fails to secure their most basic human rights.

Violence is another omnipresent element in the lives of homeless kids. In a 2020 study conducted by the Catholic organization O Pequeno Nazareno (The Little Nazarene), which works with poor children, 88 percent of the respondents said that they had been victimized by some kind of violence on the streets.

“We know that there’s an increasing number of cases of sexual violence against kids on the street. Human trafficking has also grown since the beginning of the pandemic,” Mr. Paes said.

Catholic social service workers fear that all those deteriorating circumstances have been leading more children to get involved with alcohol and drugs and to commit crimes.

“We recently had to hire a lawyer in order to help a teenager who’s involved in our programs,” said Maria Christina Sá, a longtime Catholic activist for children’s rights who founded the Archdiocese of Rio de Janeiro’s pastoral outreach for children ministry. “He was arrested and taken to a juvenile correctional facility after he stole a bike. He was hungry and wanted to trade it for food,” she said. Another three teenagers assisted by the ministry are in custody for other crimes.

According to Mr. Paes, the economic crisis is not the only reason so many kids are living on the streets in Brazil. In recent years, the national government has been weakening its social services infrastructure.

“The budget for social assistance has suffered severe cuts. At the same time, the government passed new laws that reduced the social protection for the poor,” he said.

A austerity bill approved in 2016, for instance, prohibits the federal government from raising social spending (except for inflation adjustments) for the next 20 years.

“We know that there’s an increasing number of cases of sexual violence against kids on the street. Human trafficking has also grown since the beginning of the pandemic.”

“The budget is frozen, but the country’s problems are growing. One of that bill’s consequences is the rising homelessness among children,” he said.

Catholic organizations have been adapting their priorities to the new demands. O Pequeno Nazareno began diverting resources to “emergency actions” during the pandemic.

“We had to prioritize the victims of hunger instead of keeping our regular activities,” social projects coordinator Adriano Ribeiro said.

The national Children’s Pastoral Ministry created an app through which families it supports are virtually visited by pastoral agents.

“We follow their situation and can act before they have to go to the streets,” Ms. Cizeski said.

In Rio de Janeiro, the pastoral ministry for children also began to experiment with online support to reach homeless kids. “We distributed chips and cellphones to a selected group,” Ms. Sá said. That allows the young people to contact pastoral agents directly for assistance at any time.

At the same time, the Brazilian church has assumed a more critical tone concerning state policies that affect the poor and children.

“We in Sefras have been campaigning for a government budget that can cover the social needs of the homeless,” Mr. Paes said. “The church is not sitting on the fence” on this issue, he said, “and has been in touch with popular movements in the struggle for change.”

He explained that the Franciscans and other Catholic groups understand the impact of Brazil’s legacy of past racial discrimination in contributing to serious social problems like child homelessness. They often now campaign side by side with Black activists’ movements.

“The situation of those children and teenagers is certainly a fruit of systemic racism. This part of the Brazilian population still struggles against the consequences of four centuries of slavery.”

The study released in 2020 by O Pequeno Nazareno showed that 86 percent of the homeless children in Brazil are of Afro-Brazilian background.

What Kamala Harris would see if she visited the U.S.-Mexico border
J.D. Long-García

“The situation of those children and teenagers is certainly a fruit of systemic racism,” Mr. Ribeiro said. “This part of the Brazilian population still struggles against the consequences of four centuries of slavery.” The government declines to protect the rights of poor children; a problem compounded by a history of violence by the police force against street children. Mr. Paes confirmed that the number of police brutality incidents involving Afro-Brazilian teens and children is rising.

One of the most recent cases involved an 11-year-old Black child in the city of Canindé de São Francisco, in Sergipe State. Vitor da Silva Santos was known as Junior Cocada, or “coconut candy,” because he used to sell it to help his relatives. The boy was shot dead during a police raid in an area controlled by drug dealers.

“Police violence and a genocidal policy against Blacks are a reflection of the current administration’s policies,” Mr. Paes said.

Children’s rights activists are unanimous in the belief that the situation will only get worse in the coming months. Ms. Sá has lived through many crises over the decades, but she describes the current state of homelessness among children in Brazil as the worst it has ever been.

“But there has been an awakening of solidarity in our society,” she said. “Many people are mobilized to help. This gives us hope.”