What Kamala Harris would see if she visited the U.S.-Mexico border 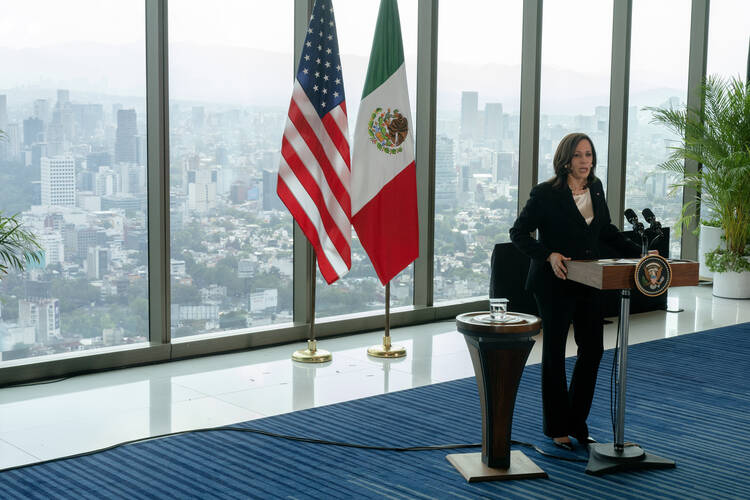 In March, President Joe Biden charged Vice President Kamala Harris with addressing the escalating number of immigrants at the U.S.-Mexico border. Since then, certain news outlets, like Fox News, have tracked the number of days that have gone by without Ms. Harris visiting the border. On June 15, that number was 83.

Last week, Ms. Harris traveled to Guatemala to meet with President Alejandro Giammattei and expressed the Biden administration’s goal to “help Guatelmalans find hope at home.” During a press conference on June 7, she told Guatemalans thinking of making the journey north to the United States: “Do not come. Do not come.”

“O.K., that’s like saying, ‘Stay home and die,’” according to the Rev. Pat Murphy, a Scalabrini priest who runs the Casa del Migrante shelter in Tijuana, Baja California. “That message is falling on deaf ears.”

If Ms. Harris does travel to the border, Father Murphy said, she should be sure to make a visit to the Mexican side. “If she just stays on her side, she’s not going to find much,” he said.

In Tijuana, Ms. Harris would see a camp of 2,000 asylum seekers near the port of entry, Father Murphy said. “If she looked a little further, she would see the people who are victims of violence in Tijuana and Mexicali and other places,” he said. Migrants may be eager to escape bad situations in their home countries, Father Murphy said, but they often do not understand how difficult conditions at the border are “until they’re stuck in the middle of [a border city] with no place to go.”

“You can’t understand [border realities] by talking to government officials. You have to talk to the people who are working with migrants and hear about the suffering.”

At diminished capacity because of the pandemic, migrant shelters are full. The United States has started to accept some vulnerable people, like families with children with an illness or those being persecuted because of their sexual orientation, Father Murphy said. But there are also hundreds deported every day.

He believes if the vice president did decide to visit the border, it would be worth her while. “You can’t understand [border realities] by talking to government officials,” Father Murphy said. “You have to talk to the people who are working with migrants and hear about the suffering.”

While in Guatemala, Ms. Harris also said that the United States would continue to enforce its laws and secure the border.

“It was upsetting because many of the people who are coming to the border right now are bona fide asylum seekers,” said Dylan Corbett, executive director of Hope Border Institute. “Asylum laws suffered major setbacks under the Trump administration and we are still not at a point where we’ve recovered from the damage that was done to the system.”

While Mr. Corbett did note progress now that minors and small numbers of people from other vulnerable populations are being received, he stressed that the Biden administration has more work to do. “[Ms. Harris’s] words undercut the need to restore asylum and betrayed a lack of understanding of the circumstances that are driving people to seek safety and refuge at the border,” he said.

Since the election, the Hope Border Institute and a number of Catholic leaders, including bishops, have invited the Biden administration to visit the border to get a better understanding of what’s happening, Mr. Corbett said. “What they would see are people in need of compassion, people in need of a humane response,” he said. “If the president and vice president were to visit the border, they would have a more grounded understanding of the reasons that are forcing people to flee.”

“Asylum laws suffered major setbacks under the Trump administration and we are still not at a point where we’ve recovered from the damage that was done to the system.”

In 2018, then-Senator Harris visited the Otay Mesa Immigration and Detention Facility in San Diego, meeting with mothers who had been separated from their children. She called the increase in family separations under the Trump administration “a crime against humanity.”

On the campaign trail last year, Ms. Harris advocated executive action on immigration until a legislative solution to address policy flaws could be found. As attorney general of California, she opposed policies that would make all law enforcement officials de facto immigration agents.

The Biden administration’s recognition of the forces that drive migration should be applauded, Mr. Corbett said. But he said the administration can address root causes while at the same time re-establishing humane asylum policies at the border.

Guatemala endured a 36-year civil war that ended in 1996. In 1954, before the war began, the United States backed a coup against President Jacobo Arbenz because the U.S. government—and associates at the United Fruit Company—considered him a communist threat. Historians say that coup, which replaced Arbenz with Colonel Carlos Castillo Armas, led to Guatemala’s bloody civil war. El Salvador, Honduras and Nicaragua also endured civil wars during the 20th century.

“Those countries, in many respects, still have not recovered from the devastation of war,” Mr. Corbett said. “We have a moral obligation to accompany them, to work with them to build a common future, so there’s a [Central American] dream. So that children can believe in it, so that we can also honor the right of people not to migrate.”

Donald Kerwin, the executive director of the Center for Migration Studies in New York, also noted that people have a right not to migrate—to stay in their home country. He sees immigration policy as an arena for a fruitful convergence of Catholic social teaching, international law and contemporary human rights principles.

The Biden administration’s recognition of the forces that drive migration should be applauded, but it can address root causes while re-establishing humane asylum policies at the border.

“States are responsible for ensuring that people can flourish at home,” he said. “But it’s an empty right at this point in many communities in the Northern Triangle countries. They’re facing impossible conditions, caused by natural disasters, climate change, gang violence and extraordinary poverty. So people have a right to flee those impossible conditions and seek lives that are worthy of human dignity. In some cases, that means leaving their countries.”

When they do leave their home countries, people have the right to seek protection wherever they can find it, Mr. Kerwin said. “The vice president seems to have bought into the… I can’t use another word, but the nativist party line, that somehow these immigrants are the cause of the problem when, in fact, they’re the victims of multiple problems in many cases.”

The church is ‘under attack’ in Myanmar
Kevin Clarke

The United States needs a functioning refugee resettlement system, an asylum system and robust humanitarian programs to address the conditions in Central America that are driving people to migrate, he said. “They’re not in place right now,” Mr. Kerwin said, “and until they are in place, people will reluctantly, at a terrible cost...continue to migrate.”

If Ms. Harris visits the border, Mr. Kerwin suggested she speak with migrants that have entered the United States, starting with the children. “Find out why they’ve come, what drove them to the United States and also see what their situation is currently, in often overcrowded facilities,” he said. “At that point, it would be clear as day that these folks are not a problem. These folks fled terrible problems, but they themselves are not the problem.”

Earlier this month, more than 20 bishops, Vatican representatives and leaders of Catholic organizations met for an emergency immigration meeting at Mundelein Seminary, outside of Chicago. Mr. Kerwin, who attended the meeting, said organizers displayed notes written by immigrant children, often addressed to God.

“It’s clear from reading these notes that these are lovely children, who miss their parents and worry about them and are in difficult situations that are not of their own making. And that the United States should do right by them,” he said. “And the right thing is to protect them and reunify them with family members.”