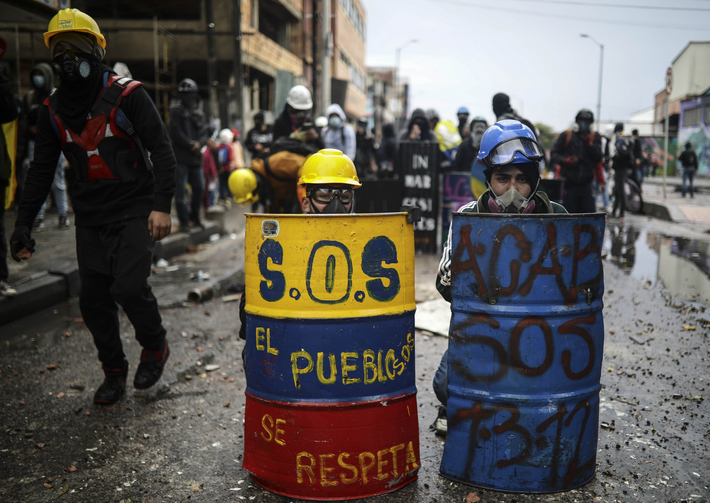 Anti-government protesters hide behind makeshift shields during clashes with the police in Bogota, Colombia, Wednesday, June 9, 2021. The protests have been triggered by proposed tax increases on public services, fuel, wages and pensions. (AP Photo/Ivan Valencia)

“We have to pray so much for Colombia,” Pope Francis said after the Angelus prayer on May 30. As the country experiences waves of protests—now continuing for more than a month—church-related institutions have been acting as peacemakers.

What began on April 28 as a public reaction to a tax reform proposal from President Iván Duque has expanded into a massive mobilization of broad discontent. Without a clearly defined agenda, the protests have unified different groups in Colombian society who have grown resentful over a gamut of social and economic issues.

The civic resistance was amplified by the government’s response after demonstrators “were met with excessive use of force and the criminalization of protest,” said Rosa Inés Floriano Carrera, the director of programs at the National Secretariat of Pastoral Social–Cáritas Colombia (S.N.P.S.).

“Every night there is a pitched battle, more dead, more missing,” she added. “Some say that there are people infiltrating the peaceful protests to provoke violence. The government denies this and says that it needs to contain [protests] because public property has been vandalized.”

What began on April 28 as a public reaction to a tax reform proposal from President Iván Duque has expanded into a massive mobilization of broad discontent.

So far 61 deaths have been recorded, mostly civilians. But the precise number of protesters killed during demonstrations is unclear: Human Rights Watch counts the total at 68 people. Hundreds have been injured.

Human Rights Watch said it has “credible evidence” indicating police killed at least 16 protesters or bystanders with “live ammunition fired from firearms,” while three other people died when police used nonlethal weapons. The report said another person died after being beaten repeatedly. H.R.W. accused police of other violent actions against protesters, including sexual abuse, beatings and arbitrary detentions.

How (and why) 8,000 migrants breached the Spanish-Moroccan border — and what it says about Europe’s migration crisis
Bridget Ryder

Demands for a national strike (“paro nacional”) are many. Most protesters express discontent about poverty and social inequality issues. “For a more equitable country without discrimination,” read the handmade poster of a 28-year-old man in Bogotá, who collected cardboard to sell for recycling in the midst of his protest. Young people make up a large number of the demonstrators, but older adults and entire families are also leaving their homes to join the crowds despite the threat of Covid-19.

Together with representatives of the United Nations, the Colombian Bishops’ Conference has been working as a mediator between leaders of the strikes and government officials. According to Monsignor Héctor Fabio Henao Gaviria, the director of S.N.P.S., the mediators hope to draft a consensus document to define what protesters hope to achieve.

On May 24, after meeting with center-right and center-left politicians, members of the so-called “coalition of hope,” Msgr. Gaviria said that “it is necessary to make an exercise of unity of the Colombian nation around great purposes, overcoming not only a transitory crisis, but building a common country in which different positions can be heard and can be integrated.”

Colombia’s Catholic bishops have made calls for dialogue and peace. “We invite you to believe in and persevere along the path of dialogue, even if at times the positions are tense and seemingly irreconcilable,” they said in a message on May 23. “True dialogue is the search for good by peaceful means, and requires patience and trust,” they wrote.

Most protesters express discontent about poverty and social inequality issues. “For a more equitable country without discrimination,” read the handmade poster of a 28-year-old man in Bogotá.

Some protests have been more peaceful than others, but Cali, the third largest city in the country, has become the epicenter of unrest. A particularly harsh government response to protesters led even more people to the streets.

Since the anti-government protests began, Mr. Duque has sent in military forces to 10 of the country’s 32 provinces to assist local police. He said that he is willing to sit down with those who protest peacefully, but he needs to first “restore order,” especially where there are roadblocks preventing traffic of people and goods. “On the people who are acting with violence, we have to act with all the capacity of the police and judicial bodies,” he told journalists.

A pre-agreement between protesters and the government had been achieved in late May, but protests endured. Mr. Duque has pledged to present a police reform proposal to Congress. He also said he is open to improving public health care and discussing the implementation of a basic income program for the poor.

Mr. Duque’s popularity, which was already down to 33 percent before the riots, is now expected to be even lower. His presidential term ends in August 2022, and he cannot run for re-election.

The tax reform his administration had proposed was intended to increase government revenue at a time of economic crisis aggravated by the pandemic through raising taxes on basic products and on income. Soon after people showed dissatisfaction, he dropped the bill and his finance minister resigned.

But that was not enough to contain the people’s rage.

Cali, Colombia’s third largest city, has become the epicenter of unrest. A particularly harsh government response to protesters led even more people to the streets.

In addition to the more than 87,000 deaths in Colombia caused by the Covid-19, unemployment and hunger have worsened during the pandemic. Susana Nuim, the coordinator of the study center of Latin American Bishops’ Council, Cebitepal, said that the health crisis aggravated problems that Colombians have kept in their hearts and minds for decades.

“Colombia’s problem is more than 200 years old,” she said. “These are historical issues linked to the distribution of land and to poverty, but also to the difficulty of seeing the other not as an adversary.” She believes the country still does not fully understand how to handle ideological pluralism. Beyond those foundational problems, after decades of civil war and the calamity of drug trafficking, paramilitaries and guerrillas remain a threat to public order.

Many Colombians are deeply dissatisfied with the failure to implement promises of the peace agreement signed by the previous government of President Juan Manuel Santos with the F.A.R.C. (“Revolutionary Armed Forces of Colombia”). After being rejected by a narrow margin in a referendum, the deal was modified and ratified by Congress in 2016. But a political faction that was radically against the agreement—led by former President Álvaro Uribe—managed to elect Mr. Duque in 2018, claiming that they could make Colombia safer.

Ms. Floriano explained that one critical and unrealized aspect of the peace deal was the creation of rural settlements and crop replacement in areas previously dominated by F.A.R.C. Those strategies were meant to help subsistence farming communities replace the former cash crop of coca, used to make cocaine. “Yet the farming conditions are still very precarious,” she said. “There are people who used to produce coca and now don’t produce anything. There is a big disincentive to small farming in the countryside.”

Each territory in the country is different, and the configuration of the population joining the demonstrations varies accordingly. Ms. Floriano recalled that Colombia previously experienced strikes among social movements from 2016 to 2019.

“Colombia is torn between making peace with guns or with dialogue; and the current government is pro-guns.”

Between November 2019 and February 2020, a first wave of demonstrations took people to the streets, among them many young adults. Those protests had been suspended because of the pandemic. Young people then had been marching, for example, in defense of public education. Many of them are known as the “neither nor,” as they neither work nor study; they want to do “either or” but do not have the opportunity.

The 2021 demonstrations replicate some of that discontent. “They want to prove that they are not an apathetic generation. And they don’t see themselves represented by the institutions,” Ms. Floriano said. About 30 percent of Colombian youths aged 18-25 years old are in the “NiNis” (“neither nor”) category.

The Rev. Leonel Narváez Gómez, founder of the Reconciliation Schools at “Fundación para la Reconciliación,” has been working for 20 years to nurture the national peace process. Colombia, he said, has to deal with its structural problems, such as agrarian reform and the promotion of justice, but only forgiveness will bring long-lasting peace.

How (and why) 8,000 migrants breached the Spanish-Moroccan border — and what it says about Europe’s migration crisis
Bridget Ryder

“Colombia is torn between making peace with guns or with dialogue; and the current government is pro-guns,” he told America. Through his foundation, Father Narváez has been teaching people in 21 countries about how to promote personal and social reconciliation.

“The narco-traffic is a distorting factor in Colombia,” Father Narváez said. “We have a militarized culture and armed groups that take advantage of it to validate their positions. We have naturalized violence, which is transmitted within families. That is the culture we have to change.”

In order to achieve reconciliation, he said, it is necessary to address basic needs in Colombia (health, land, work) but also other needs (truth, justice, reparation, human rights and respect for democracy). “We need to go to the roots, resolve the anger, the desire for revenge. Forgiveness is to move on to the exercise of compassion and mercy. We all have a beast and an angel inside. It’s time to stop feeding the beast and start feeding the angel.”

Father Narváez believes that Colombia may be experiencing a moment of “painful birth” but that it can give life to a new phase in his country. “I want to believe that we will have a historical pact [after the demonstrations are resolved]. It is an invitation to hope,” he said.