A church survey reveals how mothers in Brazil are struggling to care for newborns in prison. 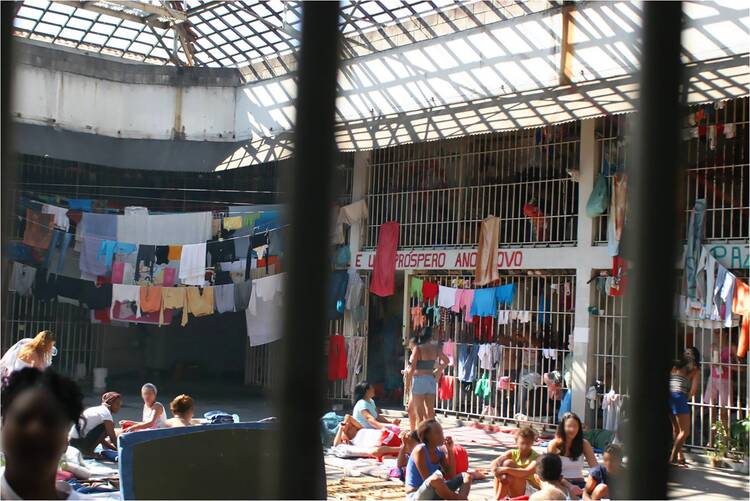 Women inmates with their faces obscured to protect their privacy are pictured at the Dacar Prison Unit 5 in São Paulo. (CNS photo/courtesy Prison Pastoral Ministry of Brazil)

At least 70 babies lived with their mothers inside women’s prisons in Brazil between May and August 2020—the height of the first wave of coronavirus deaths in Brazil—according to the results of a survey released in December 2020 by the prison ministry of the Brazilian bishops’ conference.

The Brazilian Constitution secures the right of women who are incarcerated to breastfeed their babies for six months after childbirth. The law also allows pregnant and breastfeeding women to serve their time at home. But the decision in each case is left to a judge.

In March last year, the National Justice Council, a branch of the Brazilian justice department, recommended that judges make sentencing adjustments that would discourage the spread of coronavirus in the prison system. A recent survey on prison overcrowding in Brazil showed that 31 percent of the detainees are being held before trial and not convicted of anything. Prison abolition activists claim that most people incarcerated are poor, Black people who do not have the money to hire a lawyer. They end up forgotten behind bars. The council urged judges to release several classes of prisoners during the pandemic, among them pregnant women and mothers of children under the age of 12.

“But the judiciary system hasn’t complied with the legislation or with the council’s recommendation,” Rosilda Ribeiro told America. “Women’s rights have not been respected.” Ms. Ribeiro is the national coordinator for the bishop’s prison ministry with specific responsibility for pastoral care of women who are incarcerated.

Brazil's constitution secures the right of women who are incarcerated to breastfeed their babies for six months. The law also allows them to serve their time at home. The decision is left to a judge.

The Brazilian judiciary system is “misogynistic and conservative,” said Ms. Ribeiro. “When a woman detainee asks to serve her time at home, most judges claim she is dangerous and must remain in jail.”

The real problem is that a majority of the women were arrested for nonviolent, drug-related crime and in about 50 percent of the cases they are remanded for years without a trial or conviction.

“The ‘dangerousness’ of detainees is a common excuse, bought by a society which thinks that every incarcerated person is violent,” said Clariane de Jesus Santos, a member of a working group of the bishops’ prison ministry caring for women imprisoned in São Paulo, the state with the largest number of women detainees in the country. “But that’s an ancient racist and misogynistic mechanism to keep women of color imprisoned.”

According to the National Prison Department, since the beginning of the pandemic there have been 41,468 confirmed cases of Covid-19 in prisons and 128 deaths. But the bishops’ prison ministry confirmed that in the 11 states covered by the study, there have been at least 257 Covid-19 cases among women detainees. Both figures are certainly much lower than the real number of cases, given that tests have been conducted mostly in detainees with Covid-19 symptoms, so the majority of the country’s prisoners have not been tested for the coronavirus.

Although the survey was sent to penal authorities in all 19 states, only 13 states responded. Even if only partially valid, said Ms. Ribeiro, the results provide a useful portrait of the situation in women’s prisons nationally.

Only 1,413 of the 21,334 women incarcerated that were covered by the survey have been allowed to serve the remainder of their sentences under house arrest. Almost 40 percent of women prisoners are receiving some form of medical intervention: 5,506 for clinical treatment and 2,772 for psychiatric care. The survey found that almost 800 women incarcerated are over the age of 60.

“All those conditions should have justified their transfer to house arrest, given that they are more susceptible to serious cases of Covid-19,” said Ms. Ribeiro. “But this is not what happened.”

The Brazilian judiciary system is “misogynistic and conservative...When a woman detainee asks to serve her time at home, most judges claim she is dangerous and must remain in jail.”

Detainees endure terrible conditions in many of Brazil’s correctional facilities. Civic organizations and public prosecutors have issued reports over the years revealing that Brazilian prisons are extremely overcrowded, a situation that forces most detainees to sleep on the floor. There is, frequently, a lack of running water in many penitentiaries.

Access to healthcare and medicines is also very poor, and diseases such as tuberculosis and infestations like scabies are endemic. In the case of women detainees, the state systematically fails to provide basic hygiene items such as sanitary pads and tampons. Diapers for babies are even harder to find.

“This is terrible for pregnant women and mothers of babies,” said Ms. Ribeiro. “Only a few states have prisons with special cells for those women, which aren’t much better than the regular ones.”

Pregnant inmates face all kinds of difficulties, according to Taise Zanotto, a member of the bishops’ prison ministry in Santa Catarina state. She has accompanied women detainees there for 13 years.

“Pregnant prisoners always expressed their anguish to me about not being able to receive adequate prenatal care.” Ms. Zanotto told America. “All tests took much longer to be scheduled than they should.”

The lack of adequate food is also a common problem, she added. “The penal system doesn’t provide anything that a pregnant woman needs.”

For women detainees, the state systematically fails to provide basic hygiene items. Diapers for babies are even harder to find.

In most cases, mothers who are imprisoned with their babies have to share regular overcrowded cells. “The other inmates usually let the mother and the child have a bed,” Ms. Ribeiro. “That’s the only space available for the baby.”

At six months mother and baby are separated, Ms. Zanotto said. “The state looks for the mother’s family and verifies if any relative [can assume responsibility for] the child,” she said. “If that’s not possible, the baby is sent to a temporary shelter or is put up for adoption. That is a very traumatic process.”

Family ties are typically cut in the process, said the Rev. Gianfranco Graziola, the theological and pastoral advisor to the bishops’ prison ministry.

Some prisons place new mothers with their babies into their own cells that often offer sanitary conditions little better than cells for the general prison. Father Graziola told America. “That measure, often, separates the mother from her relatives” inside prisons and jails.

The precautionary measures adopted in prisons during the pandemic intensified such conditions, Father Graziola said, making the lives of women detainees “dramatic.”

“All visits have been suspended, so we haven’t been able to see the detained women,” Father Graziola said. “A few prisons allowed video calls with families, but they’re strictly supervised by the prison agents. If anybody mentions the ongoing problems, the call is cut.”

Father Graziola and other members of the bishop’s prison ministry confirmed that women who were released over the past few months have said that violence and abuse from prison guards and other inmates inside Brazil’s correctional facilities has escalated since the pandemic started. “We have also been told that there had been Covid-19 cases in several prisons,” Father Graziola said, “which haven’t been officially reported.”

The Brazilian penal system simply does not consider the possibility of a detainee getting pregnant. “It’s a shame for the state that the only help a mother gets in prison is provided by the other women detainees.”

By December, visits had resumed in only two states, Maranhão and the Federal District, Ms. Zanotto said. In all other regions, it is difficult even to send or receive letters now.

Families have been stopped from delivering the “jumbo”—a package with food, clothes and hygiene items—to their relatives in prison. “The staff only tells us that everything is okay,” Ms. Zanotto said. “We know it is not.”

That is why Andrelina Ferreira, an ex-convict who created Mães dos Cárceres, (Mothers of Prisoners), a civic organization to assist prisoners and their families, decided to collect and deliver diapers to women’s correctional facilities.

“The situation has always been chaotic. Now we can only imagine what’s happening there,” she said. “I don’t want any of those detainee mothers to experience what I have experienced.”

Ms. Ferreira was orphaned at 13 after she fled the house of relatives who had sexually abused her. She was living on the streets when she fell pregnant. Shortly after her son was born, she was arrested for stealing food from a grocery store and was sent to a reformatory.

“They took my son away from me. I felt my breasts filling up with milk and I knew that he needed me,” she said. “But I was only taken to see him at the shelter twice a month.”

After Ms. Ferreira was told that her son would be put up for adoption, she asked her brother to care for her child. “I escaped the reformatory several times to be with my baby,” she said. “But I was always detained again.”

Ms. Ferreira managed to retain custody of her child despite several arrests as an adult before she became involved with community activism and got her life on track. “I think that Our Lady has given me a bit of her wisdom as a mother,” she said. “I’ve been working with detainees over the past 19 years.”

The Brazilian penal system simply does not consider the possibility of a detainee getting pregnant, Ms. Ferreira said. “It’s a shame for the state that the only help a mother gets in prison is provided by the other women detainees,” she said. “There’s great solidarity when a woman gives birth. When the baby is taken away, everybody cries together.”

The Brazilian government kicked off its national vaccination drive on Jan. 17, but with only about 12.1 million doses available, there are not enough vaccines for all priority groups. Currently, those are healthcare professionals, elders and indigenous peoples. Prison inmates have been added and removed from the government's priority schedules. Now It is not clear when they can expect to be vaccinated.

“Social movements had to organize a petition to protect prisoners’ right to be vaccinated,” Ms. Santos said. “We’ll keep fighting for it.”

Wondering when they can expect a vaccination is an additional uncertainty for new and expectant mothers incarcerated in Brazil’s prisons. “It’s all unclear for them now,” said Ms. Zanotto. “The only thing we know for sure is that a prison is not the right place for a mother and a baby.”