Venezuelan refugees, once promised welcome by Brazil’s government, look to the Catholic Church 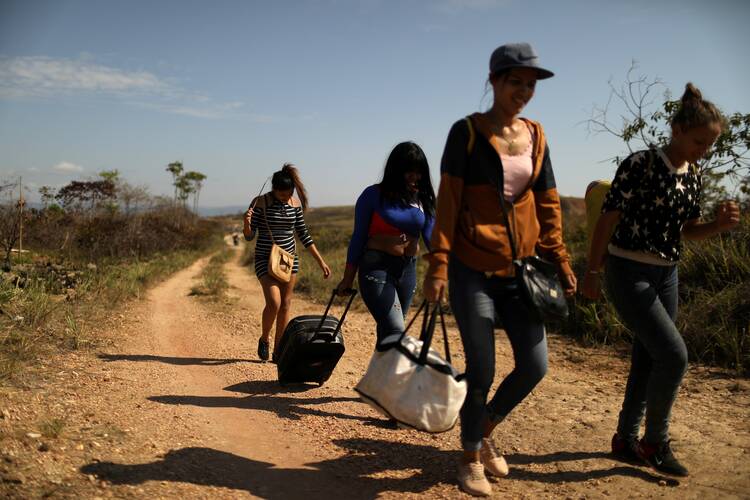 Venezuelan migrants walk along a trail into Brazil, in the border city of Pacaraima, Brazil, in April 2019. (CNS photo/Pilar Olivares, Reuters)

Since 2018, over 265,000 Venezuelans have been admitted to Brazil as part of Operation Welcome, a relief effort administered by the Brazilian army. Fleeing economic and political crises in Venezuela, these refugees can count on assistance from the Brazilian government for a brief time, but the Covid-19 pandemic has intensified hardships that the most vulnerable among them—including many indigenous peoples—must face.

The program, which is coordinated with civic institutions including the Catholic Church, offers Brazilian residency and hosts the refugees and migrants in shelters for a limited time, until they are sent to other regions in the country to find work and start a new life.

Since the coronavirus outbreak last March, however, the program’s deficiencies have become evident. Now church organizations have been stepping up to help as government attention to the plight of the Venezuelans diminishes.

The Most Rev. Mário Antônio da Silva, bishop of the Diocese of Roraima, noted that the government’s support is denied to refugees who improperly cross into Brazil, but because the border has been closed for months, Venezuelans have no choice but to enter irregularly. That means “they can’t obtain the Brazilian documents,” the bishop said, “but they keep needing shelter, food and healthcare.”

According to Ronildo Rodrigues dos Santos, the executive director of the diocese’s Caritas office, about 300 Venezuelans a day have been crossing the border into Roraima State through trails in the Amazon rainforest.

“They stand the continuous risk of being deported,” he said. “If they get sick, access to the Brazilian healthcare system is difficult.” Mr. Dos Santos said that after months when conditions in Roraima were relatively stable, the number of Venezuelan refugees has recently spiked, especially in the northern city of Pacaraima.

On Dec. 10, the U.N. High Commissioner for Refugees and the International Organization for Migration launched a $1.4 billion appeal to respond to the Venezuelan regional crisis. The agencies emphasized that the conditions of most Venezuelan migrants and refugees in Latin America—80 percent of the 5.4 million people who left Venezuela over the past few years are hosted by bordering countries in the region—have significantly deteriorated during the coronavirus pandemic.

After months when conditions in Roraima were relatively stable, the number of Venezuelan refugees has recently spiked.

In Brazil, the church feared from the beginning that the number of cases of Covid-19 among Venezuelans would eventually explode, but the disease has not been too harsh on them so far, according to Bishop Da Silva.

“The economic crisis has been the biggest problem. For at least five months, people depended exclusively on the assistance provided by [aid groups] and the church. Now activities have resumed, but there are no jobs for everybody, and salaries are low,” he said.

In Roraima State, the diocese has been distributing 1,000 food kits every month. The local Caritas office has been working to implement other assistance programs, including a basic income plan that will benefit 800 families for three months.

“For at least five months, people depended exclusively on the assistance provided by [aid groups] and the church. Now activities have resumed, but there are no jobs for everybody, and salaries are low.”

“We also developed a program called ‘Orinoco,’ which offers bathrooms and laundry areas for homeless people in Boa Vista and Pacaraima. Many Venezuelans have benefited,” Mr. Dos Santos added. Money for such efforts has come from international organizations as the diocese’s own reserves dwindle.

In São Paulo, Brazil’s major financial center, one of the church entities that has been welcoming Venezuelans is Missão Paz, a Scalabrini center for migrants and refugees.

According to Paolo Parise, C.S., the coordinator of Missão Paz, even as newcomers continue to arrive, many Venezuelans who had previously lived at the shelter before finding work and moving on to better accommodations have been forced to return after losing their jobs because of the pandemic.

“People don’t have money. All the money they make, they have to send to their families in Venezuela. So many people are not able to pay the rent,” he said. Father Parise reports that 485 Venezuelans were assisted by Missão Paz in 2020.

Many Venezuelans can be found on city streets begging for money, especially in the states of Roraima and Amazonas. Informal settlements of migrant people have also appeared. In Roraima’s capital city of Boa Vista alone, Mr. Dos Santos estimates that at least 2,500 Venezuelans live in abandoned public buildings and in shanty towns on urban land they have occupied.

The largest of such settlements, called Ka’ubanoco, is home to more than 700 people, many of them from the Warao, Eñepa and Pemon indigenous communities of Venezuela. “Social distancing measures are completely impossible in such places. Families of up to 10 people live in very small shacks and nobody wears masks,” Mr. Dos Santos said.

Many Venezuelans can be found on city streets begging for money. In Roraima’s capital city of Boa Vista, at least 2,500 Venezuelans live in abandoned public buildings and in shanty towns.

The Brazilan army announced in September that it planned to evict residents from such impromptu communities. The indigenous people have been discussing where they will live next, should the army follow through on that threat.

The army has been pressing to demolish the refugee settlements and transfer their residents to government shelters. But most indigenous groups refuse to stay in government-sponsored lodgings, explained Roberto Saraiva, the national coordinator of the Brazilian bishops’ Migrants’ Pastoral Service.

“‘Operation Welcome’ isn’t able to deal with indigenous groups. Shelters are too oppressive for them, so they occupy other places. Then the state comes up again in order to evict them,” he told America.

The Warao have been driven from their home territory for decades in Venezuela, according to Mr. Saraiva. “With the intensification of the crisis there,” he said, “they have been entering Brazil in large numbers through the woods and rivers.”

The government never planned to move Venezuela’s indigenous refugees to other locations in Brazil, Mr. Saraiva said. But some of them, especially the Warao people, began to move across Brazil on their own, going south to Pará and Maranhão states and others spreading out over the northeast.

There are dozens of Warao families in cities like Recife in Pernambuco State, João Pessoa in Paraíba State and Teresina in Piauí State. Local dioceses and Caritas have been providing housing and food to the Warao across the northeast. Institutions like the Migrants’ Pastoral Service have also been pressing the government to respect the rights of migrants and denouncing the inhumane situation they have been enduring.

“People don’t have money. All the money they make, they have to send to their families in Venezuela. So many people are not able to pay the rent.”

“Given that they shouldn’t be there according to the government’s plan, nobody feels it’s their business to help them. The church is the only institution doing so,” Mr. Saraiva explained.

At the beginning of December, the Migrants’ Pastoral Service and other Catholic organizations released a letter denouncing the terrible living conditions of the Warao in Recife, including the lack of adequate housing and healthcare.

“A young lady died of tuberculosis, and we requested that other members of her family be submitted for tests. Another five cases were identified, which is a sign of their unhealthy living conditions,” said Mr. Saraiva.

Most Warao do not speak Portuguese—many do not speak Spanish either—and endure great difficulties finding work in Brazil, according to Mr. Saraiva.

José Moraleda, a Warao migrant who lives in Açailândia in Maranhão State, said that while the number of cases of Covid-19 was not large among his people, the effect of the pandemic on the economy has been devastating for them.

“I was working in construction in Manaus [in Amazonas State]. With the pandemic, the city government halted the works and I became unemployed. That was the case for many of us,” Mr. Moraleda, who had been a language and history teacher in Venezuela, told America.

He said that the Warao left their original lands in the 1970s, after suffering much violence from encroaching miners and ranchers. “We started to immigrate in 2014, due to the multiple crises in Venezuela. We’ve been discriminated against in several ways, both there and in Brazil,” he said.

The support the Warao have been receiving from civic organizations, especially the church, is essential, he said. “Thanks to [the church]—and not to the Brazilian government—we’re able to live here.”

But many wish to move on. The biggest problem many Warao and other indigenous people are facing, Mr. Moraleda said, is the lack of jobs.

Epifanio Moreno, a Warao leader who lives in Paraíba State, agreed. “We aren’t able to go out and work, due to the pandemic. Two of us died of Covid-19. We need jobs,” he complained.

Mr. Moreno has been living in Brazil since 2018, after fleeing persecution in Venezuela. “We had been robbed and killed. Members of my family were assassinated. We had to come to Brazil,” he told America.

His group has 11 families and about 50 people. He begs in vain for governmental support. “We can’t remain abandoned like this. Our blood is red like everybody else’s. We need help.”