Catholics should work with Biden to get his immigration reform bill passed. 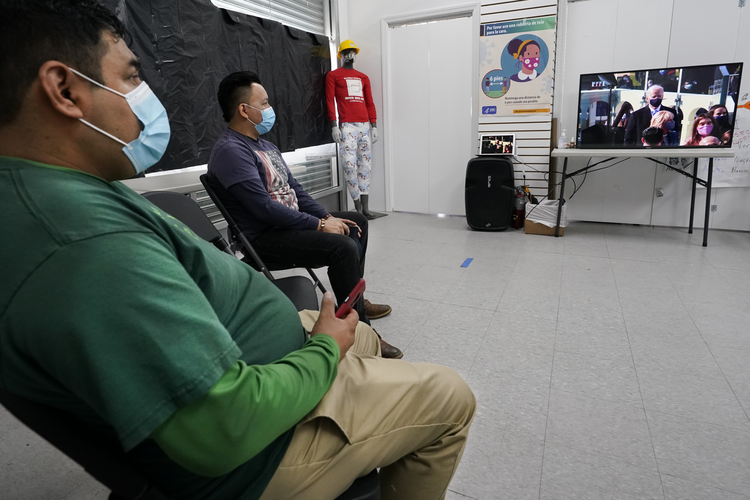 On his first day in office, President Joseph R. Biden Jr. introduced wide-ranging legislation, the U.S. Citizenship Act of 2021, to reform the nation’s immigration system. The “Biden bill” marks the beginning of a new national debate on immigration that will, inevitably, feature many of the unresolved issues of debates past.

The introduction of the bill on the first day of the administration signals that President Biden is willing to spend political capital in his first term to get it passed—capital that two of his predecessors, George W. Bush and Barack Obama, were unwilling to spend until their second term. As a consequence, both Mr. Bush and Mr. Obama failed in their attempts to pass a bill.

It also represents a unique opportunity for the Catholic community to work with the administration to finally get immigration reform over the finish line.

The legislation reflects of many of the policy priorities set forth by the U.S. and Mexican bishops in their 2003 pastoral letter “Strangers No Longer: Together on the Journey of Hope.” It includes a broad legalization program with a path to citizenship for the 11 million undocumented persons in the nation, long a goal of the church. It also reduces waiting times for family reunification in the legal immigration system, strengthens protections for refugees and asylum seekers, and addresses the root causes of flight from nations like El Salvador, Guatemala and Honduras.

There is a unique opportunity for the Catholic community to work with the administration to finally get immigration reform over the finish line.

Of course, the introduction of the bill, while welcome, is the easy part of the process. As history has shown, passing legislation like this in a relatively intact form through both chambers of a closely divided Congress will be exponentially more difficult. Difficult compromises may have to be made to ensure some measure of success.

One lesson the Trump era has taught us is to recognize the depth of opposition to immigrants in parts of the electorate—including, sadly, among the Catholic population. In past debates, proponents of immigration reform have underestimated the political strength of the opposition. For opponents, effective messaging (using scare terms like “amnesty” and “open borders”) combined with strong grassroots activism has proven to be an effective, and ultimately winning, strategy to stop legislation.

Difficult compromises may have to be made to ensure some measure of success.

Supporters of immigration reform, including Catholic advocates, will need to counter the many misleading assertions by opponents through education and community organizing. The U.S. bishops’ Justice for Immigrants campaign is primed to lead the way in this effort.

However, several issues will emerge during the debate that will require careful navigation. They represent longstanding disagreements that have torpedoed past immigration reform bills.

The scope and benefits of a legalization program. The Biden bill provides a path to citizenship to all 11 million undocumented immigrants in the country, with DACA and T.P.S. recipients and farmworkers eligible to apply for a green card immediately. Other immigrants who arrived in the country before Jan. 1, 2021, would receive temporary legal status and be eligible to apply for a green card after five years and for citizenship after eight years.

Some legislators, even those who support immigration reform, will seek to shrink the number of immigrants who qualify for any legalization program. Advocates may be confronted with the agonizing decision of accepting legal status for some portion of the undocumented population but not for everyone. Republican legislators may oppose a path to citizenship for undocumented immigrants, preferring the creation of a renewable legal status that requires an immigrant to use legal avenues already in law to attain citizenship.

Family-based immigration. Although the Biden bill reduces wait times for family reunification through the family visa system—a position that the U.S. bishops strongly support—it is likely that some elected officials will push to eliminate certain family categories in favor of employment, or “merit-based” visas. They argue that the family immigration system should focus on immediate family members—spouses and children—rather than extended family members.

In the 2013 immigration bill, for example, the family categories including adult children and siblings were eliminated and replaced with employment-based visas. Supporters of family-based immigration, including Catholic advocates, will face the challenge of expediting family-based visas without sacrificing these categories.

Future flows of migrants. One issue that has undermined past immigration bills has been “future flows” of migrants seeking to work in the agriculture, construction and service sectors, among others. Business interests have traditionally pushed for a large “guestworker” or “temporary worker” program to provide work visas to migrant workers.

Labor unions and immigrant advocates have generally opposed these programs because they do not include adequate worker protections, just wages or permanent legal status for workers. The Biden bill increases the number of employment-based visas in the system but does not include a “guestworker” program. Even so, the issue will emerge during the debate and could derail any final agreement.

Enforcement. The Biden bill enhances the use of technology at the border but otherwise does not add new enforcement programs to help deter or control undocumented migration. For many legislators, this makes the bill a nonstarter. They argue that immigration enforcement must be strengthened in exchange for any legalization program, so that future irregular migration can be better managed. (Some legislators in the past have argued that no legalization program can proceed until the border is “secure”—a goal that has been left ill-defined.) The question for advocates will be what kind of new enforcement programs are acceptable, if any.

The U.S. Bishops should find ways to collaborate with Joe Biden (and not alienate him)
J. Kevin Appleby

Despite these challenging issues, the passage of an immigration reform bill during the 117th Congress is achievable, provided that supporters are willing to accept some trade-offs and not make, as the saying goes, the perfect the enemy of the good.

This time the fate of immigration reform legislation could be different than in years past, as polls show that Americans have grown more supportive of immigrants during the Trump era, not less. The Catholic community, working with a Catholic president, can play a key role in ensuring a positive outcome.