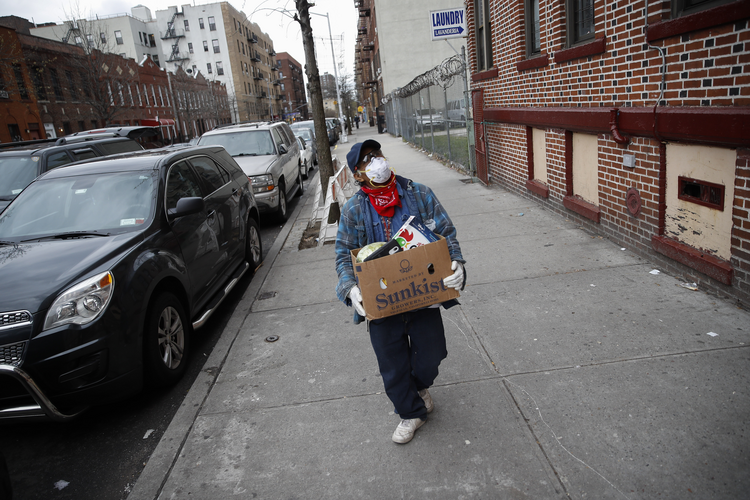 Francisco Ramírez delivers grocery donations in a neighborhood with a large immigrant population in the Bronx, New York, on April 18. (AP Photo/John Minchillo)

Restaurant owners in the Los Angeles area did not want their food to go to waste during the coronavirus pandemic. “We wanted to feed those who were still working to serve us during the pandemic, those working in hospitals and farmworkers,” Vicente Ortiz, owner of the Don Chente Restaurants, told America. “At first, it started with the food we had that was going to go bad. But then we started getting donations and people started volunteering.”

Mr. Ortiz, who serves on the finance council at St. Marcellinus Church in Commerce, Calif., has been coordinating events with his parish group, El Movimiento de Misioneros Católicos de Los Angeles. Area chefs and cooks prepared meals for 1,400 farmworkers in Ventura County on four occasions in April. They have also been serving free food to medical workers at different area hospitals. On one day in April, they prepared a meal for the entire community at a restaurant in Whittier, Calif.

“We want to stay active at this time,” he said about owners of empty restaurants teaming up to give away food. “And we hope that people don’t forget about it and support us when things return to normal.”

“They’re disproportionately represented in essential jobs.... We owe immigrants a lot. We don’t acknowledge that enough.”

Farmworkers and those who work in health care are unquestionably essential workers. And according to the Center for Migration Studies in New York, nearly 20 million immigrants work in jobs that are critical to the nation during the coronavirus. Roughly half are naturalized citizens, and the rest are legal noncitizens or undocumented migrants.

“They’re disproportionately represented in essential jobs,” said Donald Kerwin, executive director of the center. “They work front-line jobs, often risking their lives. They’re not being paid well and are treated poorly by national policies. We owe immigrants a lot. We don’t acknowledge that enough.”

In the agricultural sector, 31 percent of the total workforce are immigrants, and The New York Times reports that about half of all field workers are undocumented migrants. There are also high rates of immigrant jobholders in food manufacturing and processing (26 percent), grocery wholesalers (26 percent) and retail grocery and food industries (17 percent).

“All of the jobs that we don’t pay attention to and don’t think about, these are essential jobs,” Mr. Kerwin told America. “And immigrants fill them. How are we paying immigrants? Very poorly. And it’s even worse during the crisis, when their essential work is even more important.”

“These are people who are working while you and I stay home. They’re a vital part of the economy, both immigrants and refugees.”

Last week, four bishops who lead the U.S. Conference of Catholic Bishops’ efforts on immigration issued a statement urging government leaders to support farmworkers. “We would like to express our sincere gratitude and prayers for the many essential workers throughout the country, helping us receive our medicines, groceries and other fundamental needs during this difficult time,” they said in their statement. “We would like to highlight the reality of migrant farmworker communities and honor their heroic role amidst the many challenges they face during this crisis.”

Ashley Feasley, the director of migration policy and public affairs for the U.S.C.C.B., said both documented and undocumented immigrants work in the health care sector. Of the estimated 280,000 undocumented workers in health care, for example, nearly 45,000 are working as nursing assistants and nearly 30,000 work as home health aides, according to 2018 data from the U.S. Census Bureau.

“These are people who are working while you and I stay home,” she said. “They’re a vital part of the economy, both immigrants and refugees. I recognize that the pandemic is challenging everyone across the board, but when we think about the scale of this, we have to recognize the human side of it. Not everyone is suffering equally in this country or in the world.”

Maria Elena Manzo, a community leader with Communities Organized for Relational Power in Action, at Sacred Heart Church in Salinas, Calif., said undocumented workers, who have not received funds from the federal government’s emergency stimulus package, are struggling. Hotel closings have left many unemployed, and farm laborers have seen reduced work hours—some as few as four hours a week.

Undocumented workers, who have not received funds from the federal government’s emergency stimulus package, are struggling. Hotel closings have left many unemployed, and farm laborers have seen reduced work hours.

“It’s not like you have your savings. They don’t have enough money for rent,” Ms. Manzo said. Many come home to crowded homes, with multiple families living in one house. “If you don’t have money to pay the rent, you go to a predatory lender. They’re already behind, and by the time this is over, they’re going to be even further in debt.”

If they do work, parents in agricultural jobs leave their kids home alone, and the children are falling behind in school, she said. COPA and the Industrial Areas Foundation, a national network of faith- and community-based organizations, are among the groups advocating on behalf of immigrants in the state, and they have had some success. Last month, Gov. Gavin Newsom set aside $75 million to support undocumented workers in California. Mr. Newsom also implemented two weeks’ paid sick leave for undocumented workers.

“What has been done is only a fraction of the need,” said Timothy McManus, a lead organizer with the Industrial Areas Foundation in California. According to Mr. McManus, there are nearly 2.5 million undocumented immigrants in the state, more than 2 million of whom are in the workforce.

“The words in California are often much stronger than the policy,” Mr. McManus said of support from the state government. “What has been [done] so far is an act of needed charity, but it falls short of what justice demands.”

Few options for the undocumented

On May 5, Bishop Jaime Soto of Sacramento, Calif., will join an estimated 1,000 faith and community leaders from the Industrial Areas Foundation on a Zoom call with state legislators. The meeting, Mr. McManus said, will propose that the state government expand the California Earned Income Tax Credit to all workers who pay taxes, which includes many undocumented immigrants.

The California Catholic Conference has also been asking Gov. Newsom to do more for undocumented and lower-income Californians. “We wanted to make sure folks who were undocumented felt they were part of our community,” said Andrew Rivas, executive director of the conference. “There are ways the state is supporting Californians that the undocumented don’t have access to. And they’re involved in all phases of our food chain delivery system. So they need to be considered in terms of our response.”

Christina García, of the Marin Organizing Committee, which advocates for low-income community rights, is undocumented and has been in the United States for the last 20 years. Before the pandemic, she worked three different jobs just to get by. She was let go from two of those jobs and said did not get paid what she was owed. Because she is undocumented, she feels she has little recourse.

“There are ways the state is supporting Californians that the undocumented don’t have access to. And they’re involved in all phases of our food chain delivery system.”

Despite her status, Ms. García said she pays her taxes every year using an Individual Taxpayer Identification Number, which is used to collect taxes from noncitizens who do not have a Social Security Number. More than $3 billion is collected from individuals using these identification numbers in California alone, according to a 2017 analysis from the Institute on Taxation and Economic Policy. Taxpayer Identification Number filers pay an estimated $9 billion in payroll taxes each year, according to an I.R.S. report from 2014.

“We aren’t asking for anything that we haven’t given,” Ms. García said. “We don’t know how we’re going to make it.”

As part of her organizing group, she has been in touch with around 400 families. Only two of those families voiced concerns about Covid-19 itself, she said. Everyone else was worried about jobs and paying the rent.

Most of the families she is in contact with have children who are U.S. citizens. They sometimes have to decide between paying for the internet their child needs to keep up with school or buying food. Parents are depressed because they do not see an end to their employment struggles.

“I’m not saying that everyone isn’t suffering. Everyone is,” she said. “But the immigrant has it more difficult.”

That is true for immigrants across the United States. In the state of Washington, for example, a number of advocate groups, including the Washington Dream Coalition, are raising money for undocumented immigrants. In Texas, immigrants are hurting from the slow recovery of the construction industry, according to Josephine López Paul, lead organizer with Dallas Area Interfaith. There are 500,000 undocumented immigrants in the area, she said, who were left out of the stimulus package.

What the Covid-19 stimulus package says about essential workers and our social values
Joseph J. Dunn

Advocates are urging city officials to direct funding to nonprofit groups to help an estimated 50,000 people in high-poverty communities, Ms. López Paul said. There is a court-issued state moratorium on evictions, but her organization receives calls every day from community members who are being threatened. Dallas Area Interfaith has been informing immigrants of their rights, but Ms. López Paul said they need financial support. Latinos have a higher rate of infection with the disease, she added.

“If people don’t have a home, they can contribute to the spreading of the contagion,” she said. “If they don’t have their basic needs met, they’re going to keep going out to make a living.”

Back in Los Angeles, Mr. Ortiz and other restaurant owners are preparing food baskets for 600 families expected at a Cinco de Mayo event at Plaza la Alameda in Walnut Park. They will follow social distancing directives and give away the baskets to people in their cars or those who walk up. They have also been giving food to the large mariachi community in the area, who have not been able to work because no public events are taking place.

With reporting from Catholic News Service.

Show Comments ()
Join the conversation: Login or create an account
Before you can comment, you need to update your profile to include your first and last name, as required in our comments policy. Then reload this page and you'll be set up for commenting. Update your profile
More: Coronavirus / Immigration