Poll: Latino Protestants are more conservative and supportive of Trump than Latino Catholics 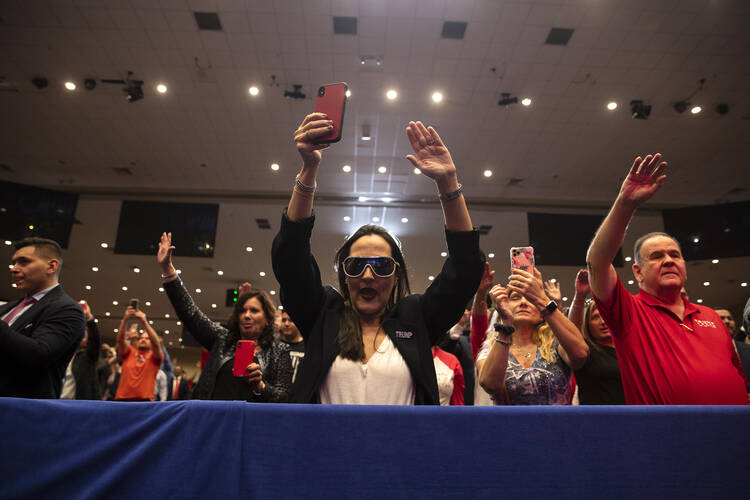 (RNS) — Latino voters this election season were instrumental in helping flip the state of Arizona blue for the first time since 1996, but in Florida and Texas more Latinos than expected voted for President Donald Trump.

Faith affiliation has emerged as one explanation for this political divide among Latino Americans.

“Religion is the largest demographic divider among Hispanic Americans,” according to a new analysis from the Public Religion Research Institute, which found that Latino Protestants are more conservative, Republican and supportive of Trump than Latinos who are Catholic or religiously unaffiliated.

Natalie Jackson, director of research at PRRI, said this religion divide could help explain why Latinos voted the way they did this election season.

"There are many differences and divisions within the group and they can’t all be considered one big bloc,” Jackson said.

The PRRI’s 2020 American Values Survey found that among Latino Protestants (followers of Christian churches separate from the Roman Catholic Church), political identity is nearly split evenly among Republicans (32%), independents (31%) and Democrats (28%), whereas Latino Catholics lean much more heavily Democratic (41%) than Republican (19%) or independent (20%). Religiously unaffiliated Latinos are the least likely to identify as Republican (7%) and most likely to be Democrats (46%); 22% identify as independents.

The divides are more distinct when it comes to Trump. The survey found that 57% of Latino Protestants approve of Trump's performance in office, compared with just over a quarter of Latinos who are Catholic (27%). Approval of Trump is lowest among Latinos who are religiously unaffiliated (16%).

When it comes to the economy specifically, Latino Catholics and the religiously unaffiliated are more approving of Trump’s performance (42% and 28%, respectively), but still less so than Latino Protestants (58%).

Jonathan Calvillo, a sociology of religion professor at Boston University, said Latino congregants in evangelical and Pentecostal communities often hear their pastors and leaders preach and speak favorably of Trump.

“I see a lot of leaders that have endorsed Trump or that in the very least offer a more apolitical stance like ‘let’s just pray for whoever is in office, pray for our leaders,’” Calvillo said in a podcast addressing the PRRI findings.

“I’m not hearing a more progressive voice from within these communities,” he added.

Evangelical leaders such as the Rev. Samuel Rodriguez, president of the National Hispanic Christian Leadership Conference, say Latinos have benefited from Trump through his economic opportunities and the Supreme Court justices he’s appointed “that respect the sanctity of life.”

Tony Suarez, executive vice president of the National Hispanic Christian Leadership Conference, has said Trump is known as a president who will “stand against communism, socialism and cartels.”

To Calvillo, it’s important to consider the different theologies and leadership structures of Catholic and Protestant churches to better understand the range of views among Latinos. Calvillo’s research focuses on how religious affiliation influences ethnic identities among Latinos.

Nearly half of Latino Protestants (48%) say they support building a wall at the U.S.-Mexico border. That percentage gets lower among Latino Catholics (34%) and religiously unaffiliated Latinos (15%). And 45% of Latino Protestants support a law preventing refugees from entering the country, while 31% of Latino Catholics and 13% of religiously unaffiliated Latinos say the same.

Here, Calvillo told Religion News Service, it can be helpful to remember the Catholic history of liberation theology, much of it coming from Latin America, that “continues to manifest in the U.S. context.”

“You have priests that are very inclined toward liberation theology. That strong social justice emphasis carries over to the people as well,” Calvillo said.

In his recently released book, “ The Saints of Santa Ana, ” Calvillo examines how “practices of lived religion” shape ethnic identity among Catholic and evangelical Mexican immigrants. The book focuses on the community of Santa Ana, a city in Orange County that is nearly 80% Latino.

Through that research, he learned Catholic parishioners often had a strong sense of community. Issues of justice and equity were issues that affected their neighbors, Calvillo said.

“Whether that articulated a very strong theology of social justice or whether they were merely invested in their neighborhoods, there was this sense of working toward the common good,” Calvillo said.

Though the Catholic Church does have conservative stances on issues like abortion, Calvillo said that through his research in the community he saw there’s the official church stance, and then “the way it’s actually lived out.”

Calvillo said Latino Protestants, particularly evangelicals, have a “very strong sense of mercy and compassion,” but often for them it’s “rooted in these acts of evangelism and conversion.” There’s a lot more emphasis on the personal relationship with God, he said.

Trump appeals to that type of individualism and entrepreneurship, Calvillo said.

Calvillo recognizes the pushback against Latino evangelicals. He mentioned recent comments made by former President Barack Obama when he suggested  Latino evangelicals didn’t care enough about immigration and undocumented people.

For Calvillo, it’s important to highlight that Latino evangelicals are “engaged in good works and a lot of them are compassionate people” who volunteer at the church or help feed the homeless.

However, what is often missing in evangelical Latino spaces is an “understanding of how structural injustice and inequality work,” Calvillo said.

“People think ‘if I just show compassion and love as individuals on a one-on-one basis, then why do I need to do all this other stuff that progressives are telling me to do?’” Calvillo said.

The Public Religion Research Institute’s 2020 American Values Survey polled 2,538 people and had a margin of error of 2.6 percentage points. The data was released mid-October and further analysis of Latinos was published Nov. 17.