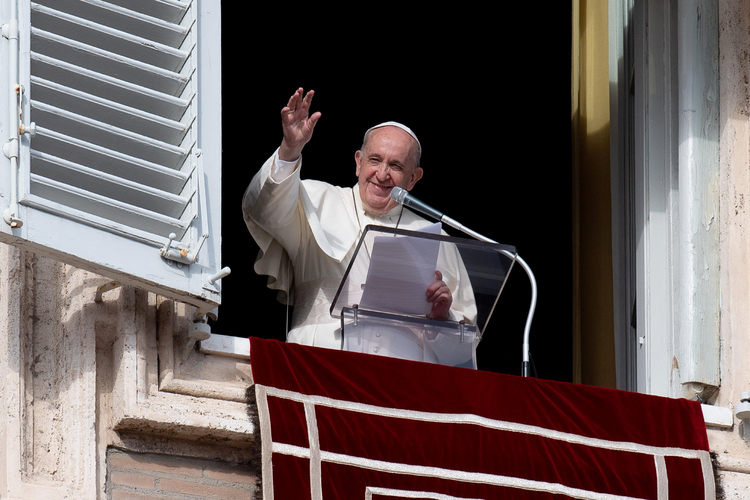 Pope Francis greets the crowd as he leads the Angelus from the window of his studio overlooking St. Peter's Square at the Vatican Nov. 15, 2020. (CNS photo/Vatican Media)

In a wide-ranging book-length interview, Pope Francis speaks publicly for the first time about the persecution of the Uighurs in China, voices his support for the racial justice protests that followed the killing of George Floyd, speaks against those protesting coronavirus restrictions and calls for a universal basic income.

The book, Let Us Dream, which will be published by Simon & Schuster on Dec. 1, is the product of a series of exchanges between the pope and Austen Ivereigh, his English-language biographer. It is an extended reflection on the change Pope Francis sees as necessary in building a post-Covid world. It is in this context that he addresses several hot-button issues.

Describing how one can only see what the world is really like by looking at the situations of marginalized people, Francis urges thinking of challenges faced by specific people so as not to fall into seeing the world’s problems in the abstract and feeling paralyzed by their size. In this section, he acknowledges the plight of the Uighurs for the first time publicly, saying, “I think often of persecuted peoples: the Rohingya, the poor Uighurs, the Yazidi.” The pope’s previous silence on the Uighurs had been interpreted as not wanting to jeopardize the Holy See’s agreement with China, which focuses mostly on the appointment of bishops.

The pope also speaks favorably a number of times about the protests for racial justice that emerged after the police killing of George Floyd in late May. He contrasts them with anti-lockdown protestors who “are victims only in their own imagination: those who claim, for example, that being forced to wear a mask is an unwarranted imposition by the state, yet who forget or do not care about those who cannot rely, for example, on social security or who have lost their jobs.” The pope has drawn criticism for appearing frequently without a mask during the pandemic. Describing people who “live off grievance” and only consider their own problems, he says, “It is the inability to see that we don’t all have the same possibilities available to us.” He continues:

You’ll never find such people protesting the death of George Floyd, or joining a demonstration because there are shantytowns where children lack water or education, or because there are whole families who have lost their income. You won’t find them protesting that the astonishing amounts spent on the arms trade could be used to feed the whole of the human race and school every child. On such matters they would never protest; they are incapable of moving outside of their own little world of interests.

Francis later describes the place of “a healthy indignation” in uniting people for a common cause, without turning such a cause into an ideology—a strict system of beliefs that, in Francis’ view, ends up imposing a uniformity and lack of diversity of opinion and can fall prey to serving a political party or figure rather than the average person advocating for that cause. “To know ourselves as a people is to be aware of something greater that unites us, something that cannot be reduced to a shared legal or physical identity. We saw this in the protests in reaction to the killing of George Floyd, when many people who otherwise did not know each other took to the streets to protest, united by a healthy indignation,” the pope says in “A Time to Act.”

In the book’s final section, Francis says, “I believe it is time to explore concepts like the universal basic income (UBI), also known as ‘the negative income tax’: an unconditional flat payment to all citizens, which could be dispersed through the tax system.” Francis said it “may be the time to consider a universal basic wage” in April, but a Vatican official said then that the pope had not meant “universal basic income.” America has reached out to Austen Ivereigh and the Vatican for clarification.

The pope outlines several benefits he sees to such unconditional payments, including compensating unpaid caretakers and “informal workers,” allowing people to refuse undignified work and thus reshaping labor relations, removing “the stigma of welfarism” and allowing people to combine work with community service.

Francis notably points to the work of female economists like Mariana Mazzucato and Kate Raworth in impacting his thinking on the best ways to construct a more equitable economy. “Could it be that in this crisis the perspective women bring is what the world needs at this time to face the coming challenges?” the pope says. He points to the success that nations with female leaders have had in controlling the coronavirus pandemic and describes his efforts to put more women in leadership positions in the Vatican.

Speaking about his appointment of six women to the Vatican’s Council for the Economy, Francis says, “I chose these particular women because of their qualifications but also because I believe women in general are much better administrators than men” because they do the bulk of organizing day-to-day in their jobs and households. “They understand processes better, how to take projects forward.”

The pope says that he wants to put women in a position where they can change the culture of the Vatican but warns, as he often does, against “clericalizing” women—that is, saying women will not be equal until they are ordained priests.

Pope Francis on Self Transformation

Following the “See, judge, act” method popular in Latin American Catholic social teaching, the book is divided into three parts: “A Time to See,” “A Time to Choose” and “A Time to Act.” The pope guides the reader through seeing the injustices that have been exacerbated by the pandemic and the sins they are rooted in. He describes making decisions through the Jesuit tradition of “discernment of spirits,” noticing where God is working and where what St. Ignatius calls the “evil spirit” is working. In “A Time to Act,” he exhorts the reader not to return to normal after the pandemic but to work for personal and structural change.

Unlike Francis’ recent encyclical “Fratelli Tutti,” which diagnosed the problems he sees in society, Let Us Dream deals more with “the process of transformation itself: how historic change happens, how we resist or embrace that process: the dynamic of conversion,” Mr. Ivereigh writes in the epilogue.

Pope Francis discusses what he calls his “personal Covids”—the times that have forced him to stop and reconsider his trajectory, which he believes is what the pandemic has forced each person to do. He describes how his lung illness as a young man, which resulted in part of one of his lungs being removed, forced him to consider how dependent he was on his caretakers. It also gave him time, he said, to consider his vocation to the Jesuits among the other religious orders he had been considering.

He also opens up about what others have called his “exile” in Córdoba, more than 400 miles from Buenos Aires, after serving as Jesuit provincial there during the country’s “Dirty War.” It was a difficult time for then-Father Jorge Bergoglio, which he compared to being put on the bench during a soccer game. He spent most of his time in prayer and hearing confessions, which he said helped him build patience. He also serendipitously read a 37-volume history of the popes. “From where I am now I can’t help wondering why God inspired me to read them,” Francis says. “It was as if the Lord was preparing me with a vaccine. Once you know that papal history, there’s not much that goes on at the Vatican curia and the Church today that can shock you. It’s been a lot of use to me!”

Francis speaks freely and with humor throughout the book, alternating between personal anecdotes, instructions on Jesuit discernment and specific calls for social change. Francis sees the pandemic as a time for contemplation and conversion, and he sees the horizon of a post-pandemic world as a time to take action to change society.

– Carlo Acutis could become the first millennial saint. Here’s the story behind his first miracle.
– Why this Jesuit middle school is staying open while NYC public schools go remote
– Pope Francis meets with NBA players at the Vatican to discuss social justice
– I have two kids with Down syndrome. Here’s what I wish those considering abortion knew about life with them.

Provide feedback on this article
Join the conversation: Login or create an account
Before you can comment, you need to update your profile to include your first and last name, as required in our comments policy. Then reload this page and you'll be set up for commenting. Update your profile
More: Pope Francis / Coronavirus / Faith in the time of Coronavirus / Books / Racial Justice