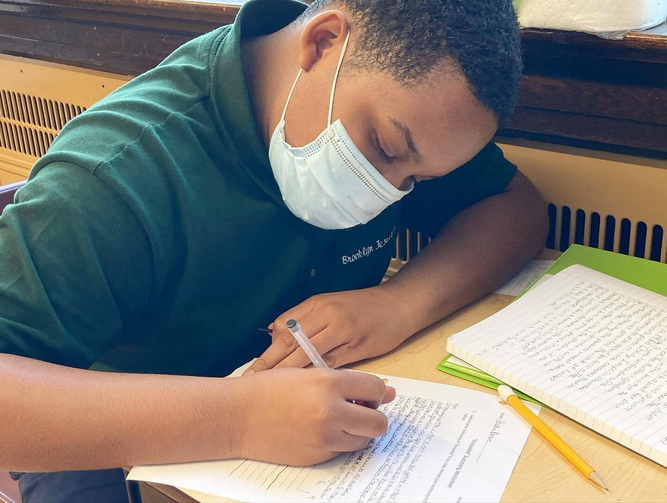 For more than a week now, the daily infection rate in the city has been at 3 percent, which meets the threshold limit set by Mayor Bill de Blasio to suspend all in-school learning. But not all schools are closed, leading once more to criticisms of the stark difference between the nation’s have and have-nots.

Mario Powell, S.J., is the president of one of the schools that remain open in the city, Brooklyn Jesuit Prep. While he sympathizes with the pain of the many people affected by the closure of the city’s public school system, he says the criticism does not exactly apply to his own school in the predominantly Black and poor neighborhood of East Flatbush in Brooklyn, N.Y.

“We are open 100 percent and in person—all of our kids are in the building,” Father Powell told me. “We have, for the most part, been that way since the beginning of the school year, except for three weeks, where our area of Brooklyn was in an orange zone, which meant we had to shut down. But we are back and running in spite of the fact that our public school colleagues are closed.”

I interviewed Father Powell for America, to ask him about his school and how they’ve managed to stay open while maintaining a remarkably low rate of positive coronavirus cases. Our conversation has been edited for length and clarity.

Ricardo da Silva, S.J.: Tell me about your school.

Mario Powell, S.J.: Brooklyn Jesuit Prep is a Nativity school in East Flatbush, N.Y. We are 100 percent students of color. We are about 85 percent Black, 15 percent Latino. Ninety-five percent of our students qualify for free or reduced lunch. Our children’s families have an average annual income each of about $27,000.

I think many people are asking how the city’s Catholic schools—especially a school like yours that caters to families of low income—can stay open while public schools have been forced to close?

If this pandemic didn’t show us now that teachers and schools are absolutely an essential part of our society, nothing will.

I think Catholic schools have shown, quite frankly, through the leadership of so many people that we can [stay open]. Give us the guidelines from experts, and we’ll spend the money—that includes poor schools like the one that I run—we will spend what is necessary to keep our kids safe because we think it is vital that education and all the rest of the support services that we provide is done in-person.

You’ve fought the threat of closure before and even threatened legal action, so keeping schools open is something you feel you feel strongly about. Would that be right?

I would say that that would be an understatement. When we were closed originally, we were pushed within the same zone that, maybe on a map in a state capital, it makes sense. But when you come down here to Brooklyn you realize that what [the governor and mayor] did made absolutely no sense.

When I hear folks criticize me for my desire to remain open, I push back because I want them to come spend some time here in Brooklyn and ask our families what they want.

But the reason why I felt very strongly about it, outside of a common-sense angle, was because of the folks that are hurt the most by the switch to virtual learning: Black, brown and poor people. They have fewer options. Their access to technology, having a stable work environment at home and even having an adult at home is all going to be less than their white counterparts, whose families earn more money. When I hear folks criticize me for my desire to remain open, I push back because I want them to come spend some time here in Brooklyn and ask our families what they want. Our families overwhelmingly want the school to be open.

How do you strike the balance between keeping the children in school and keeping the school community safe from infection?

I think the number one thing is safety. It’s quite amazing to me that when you read the newspaper and you watch the news, you still see all these folks who are denying that Covid-19 exists or they don’t wear masks. The amazing thing about kids is: You can teach them the importance of safety. You can teach them the importance of washing their hands, of disinfecting their work areas and wearing masks. And the great thing is: They will actually listen and follow directions when you make that a priority of the community that they exist in.

If they want to remain in the classroom, with their teachers and their friends—the only way that we’re going to be able to do this is if we as a school community take safety as our number one concern here. So for me, that’s number one: teaching your students to buy into not just wearing masks or washing your hands or disinfecting your work area but a culture of safety within your school.

That’s number one: teaching your students to buy into not just wearing masks or washing your hands or disinfecting your work area but a culture of safety within your school.

What’s also on the top of my mind are my faculty and staff. I have a faculty person who is pregnant. I have another faculty person who’s immunocompromised. And so when I say it’s about inculcating a culture of safety, it is truly about people’s lives and making sure that we take them seriously enough. At the same time, you balance that with the fact that if you take a poll in my school building, 100 percent of the people would say this is exactly where we should be.

Could you give us an anecdote of the highlights and lowlights of these months in the life of your school?

I would say the highlight is that in the midst of the pandemic we’ve renovated a building and moved. Our old building was tired and worn, and our new building is just bright and beautiful. It’s not that I needed someone to say this, but I remember overhearing a student say, as they were walking around this building, “Are we rich now?”

The low end of that is hearing from one of our counselors about one of our parents that was laid off due to Covid-19 and knowing that so many of our families have been inordinately impacted by this. That was just one of many of our parents that have been impacted in terms of either work or their own health or someone in their family. It was just a reminder for me that the work that I do on behalf of this community—on behalf of this largely immigrant, Black community that has been really made extremely vulnerable by the virus—is worth it.

What about Jesuit mission and Catholic identity at school? How do you think that the coronavirus has brought that into relief?

I joke with folks that between the pandemic and then calls for racial justice—and quite frankly, the economy for wealthy people is doing fine but the economy for poor people is not doing very well in this country—if you haven’t learned how to pray in the last couple of months, I don’t know if anything is going to get you to pray. This has been a tough six to eight months that this country and this city have been going through, and for our school community.

We began the year with the Mass of the Holy Spirit. We did it outside in the parking lot, and it is the first time we’ve done something like that since I’ve been president. The thing that just kept coming to mind as we were preparing the kids for that liturgy was really a very Ignatian thing: gratitude.

If you haven’t learned how to pray in the last couple of months, I don’t know if anything is going to get you to pray.

Just being grateful for individual things that come your way. It’s wonderful for you to teach your kids to say “thank you” when something has been freely given to them. But I think in a very Ignatian way, what we’ve been trying to do since the Mass of the Holy Spirit has been trying to inculcate a real culture of gratitude...inculcating a sense of gratitude that there’s nothing that we can do to earn all the gifts that God has given us.

Religiously, we are pretty diverse. We have about 40 percent Catholics, maybe another 40 percent evangelical. We have Muslim students. And gratitude speaks across religions, religious divides and religious culture. It’s something that translates extremely well, and that’s something that we’ve been doing even more so since the virus has hit and since we’ve been back in school—just making sure that we focus on maintaining a culture of gratitude.

What gives you hope?

Every Wednesday, we have an afternoon assembly. And usually at that afternoon assembly, what we try to do is take the world that’s out there and bring it into B.J.P., use our lens of being a Jesuit Catholic school and help unpack stuff that our kids see or hear about.

At our Wednesday assembly this week our principal presented [on] Ruby Bridges. Nov. 14 was the anniversary of a young Black girl attempting to desegregate her elementary school. That was Nov. 14, 1960. There was an image of Ruby being led by a police officer into her school—all our kids were in their individual homerooms, and we’re doing this assembly via Zoom—and the principal asked how many kids know who this young girl is. And so many hands shot up in the air.

What gave me hope out of that was that our kids have a sense of ownership over their own history. And no matter what challenges come their direction—whether it’s a virus, whether it’s continued racism or segregation within this country—no one’s going to take away their history, no one’s going to take away their knowledge of their history. And that will allow them always to have the strength and power. Seeing their hands raised with that gave me a tremendous amount of hope and strength. 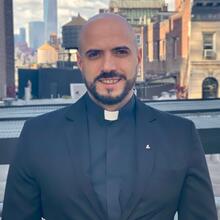