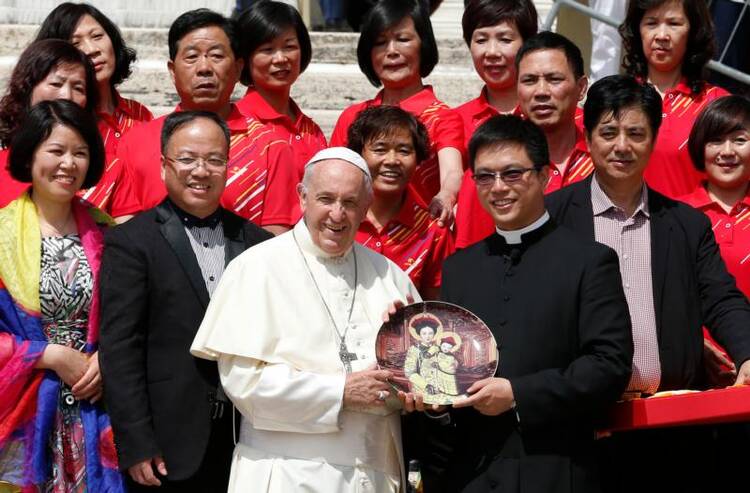 Pope Francis poses with pilgrims from China during his general audience in St. Peter's Square at the Vatican June 6. (CNS photo/Paul Haring)

The Vatican and China are reported to have reached a landmark agreement by which Beijing would recognize Pope Francis as the head of Chinese Catholics in exchange for Francis’ recognition of two bishops in China who were appointed without Vatican approval. The agreement is set to be signed later this month, according to The Wall Street Journal.

While the agreement suggests it is time for cautious optimism about the situation of Catholics in China, another religious group in the country is facing persecution that demands attention. Up to one million Uighur Muslims are detained in what a United Nations panel has called a “massive internment camp that is shrouded in secrecy.”

Pope Francis to Chinese Catholics: The church is praying for you “in the midst of difficulties”
Gerard O’Connell

Already living in a highly surveilled and policed state, Muslims are now being forced to “disavow their Islamic beliefs, criticize themselves and their loved ones and give thanks to the ruling Communist Party,” former detainees told the Associated Press.

The Vatican thus far has made no public comment on the situation of the Uighurs. Pope Francis, in keeping with his predecessors, has sought every opportunity to improve relations with the Chinese government. With the news that a historic agreement is imminent, the Vatican faces a risk and an opportunity. It is worth noting that if Beijing has the resources and the will to fiercely persecute one religion, there is no guarantee they will not do the same to another.

Outright advocacy for the Uighurs would likely torpedo a Sino-Vatican agreement without obtaining any improvement for them, and in the end it could make life worse for Catholics and Muslims alike in China. A completed agreement will establish more regular communication between Catholics in China and the rest of the world and will help normalize religious practice within Chinese society. These developments can advance religious liberty in China and may aid the Uighur people in the long term.

A completed agreement will establish more regular communication between Catholics in China and the rest of the world and will help normalize religious practice within Chinese society.

As it continues moving toward an agreement with China, the Vatican should also take care to assure that progress on this front not be used to whitewash China’s record on religious freedom, which remains troubling. It should be clear in its negotiations with China that repression of any religion decreases the stability and harmony that China says it seeks in its regulation of religious practice. The Vatican should also continue to encourage and cooperate with the United Nations and other international actors calling for justice for the Uighurs and urging China to respect religious liberty as a fundamental human right.

This deal saddens me. It reflects a secular calculation based on a mass marketing appeal for a piece of the Chinese religious population.

This kind of deal is not the way of Jesus. Choosing the easy way is not the option offered by Christ, but by Satan. It saddens me too that Chinese Christians must face suffering, but this deal dilutes the very premise of their faith: to follow Jesus even at the inevitable cost of persecution.

What was Pope Francis thinking when negotiating with this repressive government? More harm than good will come from this deal in the long run.