The Top 3 Reasons Catholics Will Vote for Joe Biden 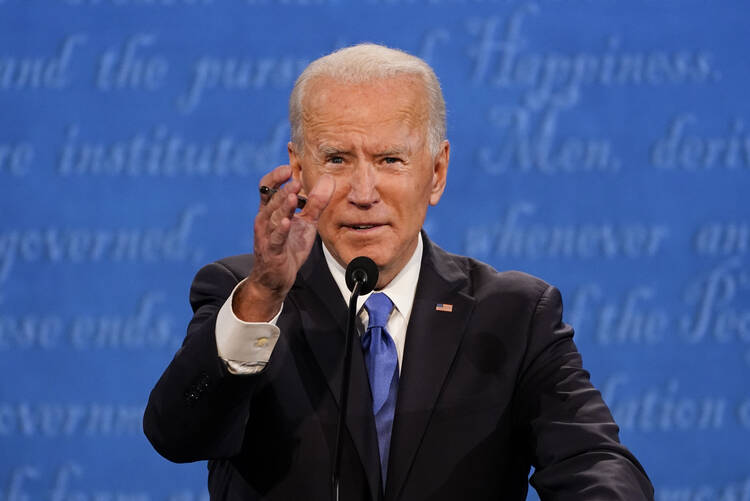 Editor’s Note: With the 2020 U.S. presidential election only days away, America’s editors seek to sum up the appeal of each major presidential candidate. These articles are intended as analyses, not endorsements. Read the Catholic case for Donald Trump here.

With the 2020 U.S. presidential election only days away, we have one last chance to take stock of the “Catholic case” for each of the two major candidates, both of whom have actively sought Catholic votes. Here are a few of the most common arguments made by Catholic voters on behalf of the Democratic nominee, former Vice President Joe Biden.

Reason No. 1: Anyone but Trump

Many Catholics would have voted for almost any of the contenders for the Democratic presidential nomination rather than for Mr. Trump. But that may be true of Mr. Biden’s supporters in many demographic groups. A recent Pew Research Center survey found that 63 percent of Biden voters were more “against Trump” than “for Biden.”

Even many Republicans voiced concerns about Mr. Trump’s character and policy views in 2016. Many Catholics associated with the Republican Party, including George Weigel and Robert George, vigorously opposed his election. During the Republican primaries, Mr. Weigel and Mr. George co-wrote a piece for National Review asking the party to consider alternatives “who do not exhibit his vulgarity, oafishness, shocking ignorance, and—we do not hesitate to use the word—demagoguery.”

Mr. Trump’s actions as president have not erased these concerns. Catholic leaders have harshly criticized his policies on immigration, including his family separation policy, and his seeming indifference to racism, particularly his reaction to white supremacists rallying in Charlottesville, Va., in 2016. They have also criticized his economic policies and health care proposals, as well as his disrespectful statements concerning women, racial minorities and even the military. His environmental policies are out of step with the priorities of Pope Francis.

A loss for Mr. Trump would bring a close to an administration that has consistently mocked and violated Catholic social teaching, but there are also positive aspects of Mr. Biden and his candidacy

Abortion is a major issue for many Catholic voters, but some political commentators argue that Mr. Trump is not sincerely or consistently “pro-life.” (David French recently wrote in Time magazine that “Trump will end his first term with the nation’s abortion laws largely intact and without engaging in a single serious effort to defund Planned Parenthood” and that his handling of the Covid-19 pandemic denied the “incomparable worth of the human person.”) Like Mr. Biden, Mr. Trump has shifted his personal position on abortion to fit his party’s orthodoxy, being vocally pro-choice until about 2011. One of his main talking points has been that he will appoint pro-life judges who will overturn Roe v. Wade. But as John Kenneth White wrote earlier this year in The National Catholic Reporter, “What happens outside of the womb is equally important as protecting the fetus.”

Some Catholic leaders have also accused Mr. Trump of using religion as a political tool. Archbishop Wilton Gregory of Washington (recently named a cardinal by Pope Francis) said it was “baffling and reprehensible” for the Saint John Paul II National Shrine to host a photo op for Mr. Trump there to detract from mass protests against racism. Mr. Trump has also seemed to drive wedges within religious communities, as when he encouraged critics of Pope Francis within the Catholic Church, most notably Archbishop Carlo Maria Viganò.

A loss for Mr. Trump would bring a close to an administration that has consistently mocked and violated Catholic social teaching, but there are also positive aspects of Mr. Biden and his candidacy

Mr. Biden appeals to many voters as a relatively calm and civil political figure who would not dominate the national discourse the way Mr. Trump does. (“Remember when you didn't have to think about the president every single day?” asks one Biden campaign ad.) Some Catholics argue that Mr. Biden is also preferable to Mr. Trump on a host of policy issues, including the economy, immigration and racism.

The social justice organization Network released a scorecard of the two major candidates and gave Mr. Biden higher marks on 26 out of 27 issues, including the death penalty, “family-friendly” tax and workplace policies, and humane immigration law. (Abortion was the exception.) In an email to supporters, Simone Campbell, S.S.S., who announced she will step down as the head of Network in mid-October, wrote, “Catholics cannot be true to their faith and vote for Donald Trump in November.”

Mr. Biden appeals to many voters as a relatively calm and civil political figure who would not dominate the national discourse the way Mr. Trump does.

The Biden campaign’s faith outreach director, Joshua Dickson, made a similar pitch in an interview with America in September, saying, “We are actively making the case about why the Biden-Harris agenda deeply exhibits and embodies the values that are important to Catholics, such as social justice, loving our neighbors as ourselves, being our brother’s and sister’s keepers and working to ensure everyone has the chance to achieve their God-given potential.”

Mr. Biden’s proposals align closely with the Democratic Party platform, but the party is hoping that his Catholic faith and working-class background will emphasize the parallels to Catholic social teaching—as well as to the labor and social justice tradition that once helped the Democrats win votes across the Rust Belt.

The Catholic case for Mr. Biden on the grounds of public policy does presume a rejection of “single-issue” voting, and that issue is abortion. While not endorsing Mr. Biden, Bishop Mark J. Seitz of El Paso, Tex., wrote in America that the single-issue approach reinforces partisan divisions and overlooks the “dehumanizing policies” in areas such as immigration that have taken hold in the United States.

The Catholic case for Mr. Biden on the grounds of public policy does presume a rejection of “single-issue” voting, and that issue is abortion.

To be sure, the U.S. Conference of Catholic Bishops has said that abortion is the “pre-eminent” issue of our time, but some Catholics view this simple declaration as being in tension with Pope Francis’ words in his apostolic exhortation “Gaudete et Exsultate”: “Equally sacred, however, are the lives of the poor, those already born, the destitute, the abandoned and the underprivileged, the vulnerable infirm and elderly exposed to covert euthanasia, the victims of human trafficking, new forms of slavery, and every form of rejection.” And the U.S.C.C.B. has certainly voiced its disagreements with Mr. Trump on immigration, foreign policy, the death penalty and the protection of the environment, among other issues.

Finally, some Catholics argue that even with respect to the goal of preventing abortions in the United States, better health care and financial support for working-class families would be more effective than the Republicans’ long-promised reversal of the Roe v. Wade decision. As William Cavanaugh recently wrote in America, “One can agree with the U.S. bishops that abortion has ‘preeminent priority’ and still see the plain fact that electing Republicans has no positive relation to outlawing or even reducing abortion nationwide.”

Perhaps the most distinctively Catholic argument for Mr. Biden is the idea of empathy.

He is the product of (a certain sort of) Irish-American Catholicism: emotional and open, mournful but loving. As Emma Green wrote in The Atlantic, “Selling America on this Irish Catholic Lake Wobegon—a place where family comes first, everyone’s middle class, and all of the kids learn the same basic values from the wise nuns around the corner—is how Biden hopes to win the 2020 election.”

Perhaps the most distinctively Catholic argument for Mr. Biden is the idea of empathy. He is the product of (a certain sort of) Irish-American Catholicism: emotional and open, mournful but loving.

His character has been shaped by the history of loss in his family, including his first wife Neilia and daughter Naomi in a car accident, and son Beau from brain cancer. As John Carr wrote in America, “Mr. Biden’s story is one of faith and family, tested by tragedy.”

Mr. Biden’s character also offers an ethical foundation for Democratic politics. As NCR’s John Kenneth White put it, “Biden’s candidacy speaks to the national necessity for a moral cleansing. Such a purification begins with the commandment, ‘Love one another.’”

And Mr. Biden has adapted his faith well to the demands of political discourse in a pluralistic society, unapologetically and deftly quoting Pope Francis’ recent encyclical “Fratelli Tutti” and warmly congratulating Archbishop Wilton Gregory on being named the first African-American cardinal from the United States.

The contrast with Mr. Trump is often noted. To return to Mr. Carr: “I do not know Donald Trump personally. But after four years of watching him in office, he seems to be consumed with himself, lacks empathy and will not accept responsibility.”

That brings us back to the argument that the most compelling reason to vote for Mr. Biden is that he is not Mr. Trump. As Network’s Sister Campbell put it, “I see the cracks in our nation’s foundational values growing wider” since Mr. Trump took office. “This is a spiritual crisis, and our faith and patriotism compel us to speak and to act.”