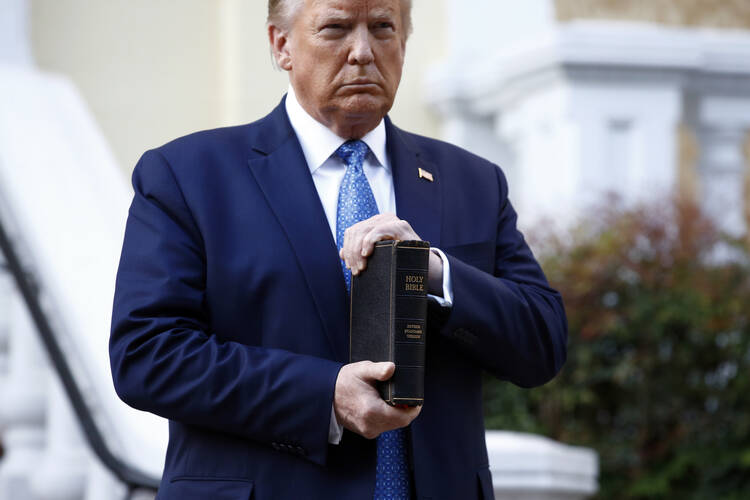 President Trump visited the Saint John Paul II National Shrine in Washington on Tuesday, June 2, prompting criticism from Catholics who demonstrated near the Catholic University of America, which is adjacent to the shrine, with some praying the rosary while holding signs reading, “Our Church is Not a Photo Op” and “Black Lives Matter.” Mr. Trump and his wife, Melania, who is Catholic, stood for several minutes in front of a large statue of Saint John Paul II before entering the building.

Archbishop Wilton Gregory, who has led the Archdiocese of Washington for just over a year, condemned the visit in a statement released on Tuesday morning before Mr. Trump’s visit.

“I find it baffling and reprehensible that any Catholic facility would allow itself to be so egregiously misused and manipulated in a fashion that violates our religious principles, which call us to defend the rights of all people even those with whom we might disagree,” the nation’s highest-ranking African-American bishop said.

Archbishop Gregory pointed to John Paul Il’s defense of human rights to condemn “the use of tear gas and other deterrents to silence, scatter or intimidate them for a photo opportunity in front of a place of worship and peace,” alluding to Mr. Trump’s photo in front of Saint John’s Episcopal Church on Monday.

The shrine emailed a statement to America that read:

The White House originally scheduled this as an event for the president to sign an executive order on international religious freedom. This was fitting given St. John Paul II was a tireless advocate of religious liberty throughout his pontificate. International religious freedom receives widespread bipartisan support, including unanimous passage of legislation in defense of persecuted Christians and religious minorities around the world. The shrine welcomes all people to come and pray and learn about the legacy of St. John Paul II.

The purpose of Mr. Trump’s visit was to highlight his administration’s efforts to protect religious liberty. Later in the day, he returned to the White House to sign an executive order related to that subject. The visit comes as the president’s reelection campaign has made efforts in recent weeks to appeal to white Catholic voters, a demographic he won in 2016.

Archbishop Wilton Gregory: “I find it baffling and reprehensible that any Catholic facility would allow itself to be so egregiously misused and manipulated in a fashion that violates our religious principles.”

Mr. Trump’s visit coincides with the anniversary of Pope John Paul II’s 1979 visit to his native Poland, making him the first pope to visit a communist nation. On Tuesday morning, the U.S. embassy to the Holy See tweeted a photo of St. John Paul II with a quote from Ambassador Calista Gingrinch, saying: “On June 2, we commemorate the 41st anniversary of Saint John Paul II’s historic celebration of Mass in Warsaw in 1979. It was the start of a nine-day pilgrimage that changed the world.”

Sister Simone Campbell, who heads the social justice lobbying group Network, said in a statement: “President Trump is now using the Catholic faith in another photo op to defend his appalling refusal to address racism and police violence in the United States. He is trying to create a false dichotomy of peaceful protestors versus the Church. That could not be further from the truth, and any Christian who believes it does not understand Jesus’s message.”

Sister Simone Campbell: “President Trump is now using the Catholic faith in another photo op to defend his appalling refusal to address racism and police violence in the United States.”

Mr. Trump’s visit to the shrine comes a day after a large group of peaceful protesters gathered in front of the White House were subjected to tear gas so that Mr. Trump could walk the short distance from the White House to Saint John’s Episcopal Church, where he posed with a Bible for a photograph. Later in the day, the White House released a campaign-style video of the event, without any footage of the protesters. The visit was condemned by the church’s clergy, who were gathered with the protesters, and the Episcopal bishop of Washington, who condemned the use of the church as a prop.

Democratic political leaders also took on Mr. Trump’s use of the Bible yesterday in his photo op.

Speaking in Philadelphia on Tuesday morning, former Vice President Joe Biden, the presumptive Democratic nominee for November’s presidential election, said he wished Mr. Trump would have read Scripture rather than simply posing with it.

Mr. Biden noted that “peaceful protesters” were dispersed from the “doorstep of the people’s house, the White House,” by police using tear gas and flash grenades so Mr. Trump could stage what the former vice president called a “photo op” publicity stunt.

“The president held up a Bible,” Mr. Biden added. “I just wished he opened it once in awhile instead of brandishing it.”

“The president held up a Bible,” former Vice President Joe Biden said. “I just wished he opened it once in awhile instead of brandishing it.”

On Monday, Mr. Biden visited the Bethel AME church in Wilmington, Del., where he met with more than a dozen African-American leaders, some of whom challenged him about his own record.

“Hate just hides. It doesn’t go away, and when you have somebody in power who breathes oxygen into the hate under the rocks, it comes out from under the rocks,” Mr. Biden said.

Leaders in the Episcopal Church criticized Mr. Trump’s visit to the exterior of Saint John’s on Monday, calling it a photo op used for political purposes and expressing dismay that they were not looped into the plans ahead of time.

Episcopal Bishop Mariann Budde, whose diocese Saint John’s belongs to, said she was “outraged” by Mr. Trump’s visit and noted that he did not pray while stopping by the church, a landmark known for its regular visits from sitting presidents since the early 19th century.

“He took the symbols sacred to our tradition and stood in front of a house of prayer in full expectation that would be a celebratory moment,” Bishop Budde said in an interview Monday after her statement on Mr. Trump’s visit was posted to the diocese’s Twitter account.

“There was nothing I could do but speak out against that,” she added, calling for a focus on “the deeper wounds of the country” amid ongoing demonstrations against racial injustice. Mr. Trump’s visit “did not serve the spiritual aspirations or the needed moral leadership that we need,” she told NBC’s “Today” on Tuesday. “It did not address the grievous wounds that we are dealing with and the agony of our country.”

Speaker of the House Nancy Pelosi read from a Bible in front of reporters on Tuesday, saying, “Last night when I saw the president hold up the Bible, I was thinking of so many things in the Bible would have been appropriate in terms of the humanity of all people in our country.”

Ms. Pelosi, who speaks frequently of her Catholic faith, quoted Ecclesiastes, reflected on time and said it is “long overdue time for us to make some of that change that people were calling out for.” She spoke for several minutes, quoting the words of previous U.S. presidents about police brutality and racial profiling, and said, “We would hope that the president of the United States would follow the lead of so many presidents before him to be a healer in chief and not a fanner of the flame.”

.@SpeakerPelosi reads from Bible in reaction to President Trump's Monday Remarks: "It's long overdue time for us to make some of that change that people were calling out for." https://t.co/BNXHpAGWvOpic.twitter.com/tGPDFYeCbJ

This article has been updated. Material from the Associated Press was used in this report.