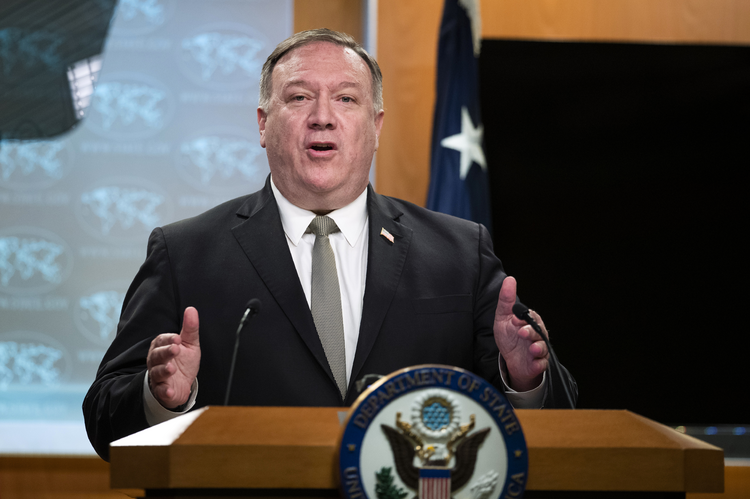 For another analysis of the Commission on Unalienable Rights’ draft report, see “What Catholic Social Teaching Says About Property Rights,” by Kelly S. Johnson, published on Aug. 7.

It was inevitable that in these contentious times human rights would be drawn into the culture wars. For two generations, at least, opposing camps have posed their contrary visions for social change in the uncompromising terms of absolute human rights. Maximalist claims disallowed any legitimate space for the moral claims of their adversaries. Ethical nuances, juridical distinctions and prudent political compromise fell by the wayside. Moral reasoning gave way to partisan sloganeering.

So, when a year ago Secretary of State Mike Pompeo announced he was appointing a commission to rationalize the expanding field of human rights in light of the values on which the United States was founded, there were howls of indignation that the exercise threatened to run roughshod over 200 years of history, returning us to the 18th century. The secretary’s agenda seemed to call for a retrenchment on human rights under the cover of American exceptionalism.

Writing in America at that time, I worried that “the review represents a threat to two key dimensions of human rights law...the historic development of human rights over the centuries...[and] the universality of human rights” by gauging them solely by early American standards.

There was particular concern in pro-choice and feminist quarters that in the interest of religious liberty the commission’s report would privilege religious interests over reproductive rights and equal treatment of sexual minorities. (In the interim, as it concluded its 2019-20 term, the U.S. Supreme Court split the difference in its end-of-term decisions, privileging religious exemptions and sexual minorities in separate rulings.)

The interim report, issued on July 16, does not venture into those troubled waters. The commissioners, led by Harvard law professor Maryann Glendon, have produced a consensus document, centrist in a sophisticated way seldom found in public documents.

Contrary to the fears of Mr. Pompeo’s critics, the report does a service by synthesizing the founding documents—the Declaration of Independence and the Constitution with its Bill of Rights—with the re-founding texts of Abraham Lincoln and Reconstruction and the global human rights revolution of the 20th century centered on the Universal Declaration of Human Rights. Throughout it links freedom and equality, refusing to decouple them as many culture warriors do.

When so many partisans regard religious freedom as an irritant exacerbating value conflicts, it is refreshing to see public intellectuals finding positive political value in it.

The report makes the Universal Declaration of Human Rights the point of reference for articulating the place of human rights in U.S. foreign policy. In listing the ways the United States can advance human rights in foreign policy, it relies on soft power, beginning with the modeling of rights at home. In foreign policy, diplomatic measures and open communication, it says, are preferable to coercive methods like economic sanctions.

But the commissioners fail to address the multitude of rights treaties enacted since 1948, beyond the Universal Declaration. They welcome “the development of a positive law of human rights,” but air the criticism, which Secretary Pompeo seems to have embraced, that the multiplication of rights may reduce the value of any single right.

“The surfeit of new treaty obligations in human rights,” the commissioners observe, “does not seem to have increased the effectiveness of human rights law nor stemmed the pervasive violations of very basic human rights around the world, even in many countries that have ratified all of the major treaties.”

American political culture would surely benefit if more religious activists would devote themselves to building up the kind of civic amity the commissioners envisage.

The report reminds its readers of the interaction of positive human rights law and nonbinding, often aspirational documents like the Declaration of Independence and the Universal Declaration of Human Rights, and diplomatic instruments like the Helsinki Accords, which opened the way to human rights monitoring and enforcement. It also repeatedly recalls that the very notion of human rights relies on an appeal to a higher standard of justice beyond the civil law.

As to religious liberty, the report provides instructive service by rooting it in the American political tradition, especially the writings of James Madison. It does allow historical primacy for religious freedom, along with the right to property. That primacy, however, seems to reduce itself to three features of religious liberty: “as an unalienable right, an enduring limit on state power, and a protector of seedbeds of civic virtues.”

This priority seems not to assign greater salience to religious liberty than to other rights and freedoms, as some feared it might. “It would be a violation of a country’s international obligations,” they assert, “to ignore other fundamental principles or to disparage them.”

The principles of the Universal Declaration, the commissioners contend, “were meant to work together rather than to be pitted against each other. Conflicts or tensions between fundamental rights therefore must be occasions to discern how to give each right as much protection as possible consistent with the overarching conviction [that]...‘All human beings are born free and equal in dignity and rights.’”

Furthermore, the commissioners regard religious freedom as a binding and soothing ingredient in the “large and diverse polity” that is the United States. When so many partisans regard religious freedom as an irritant exacerbating value conflicts, it is refreshing to see public intellectuals finding positive political value in it. American political culture would surely benefit if more religious activists would devote themselves to building up the kind of civic amity the commissioners envisage.

Drew Christiansen, S.J., a former editor in chief of America, is Distinguished Professor of Ethics and Human Development at Georgetown University and a senior fellow with the Berkley Center for Religion, Peace and World Affairs.