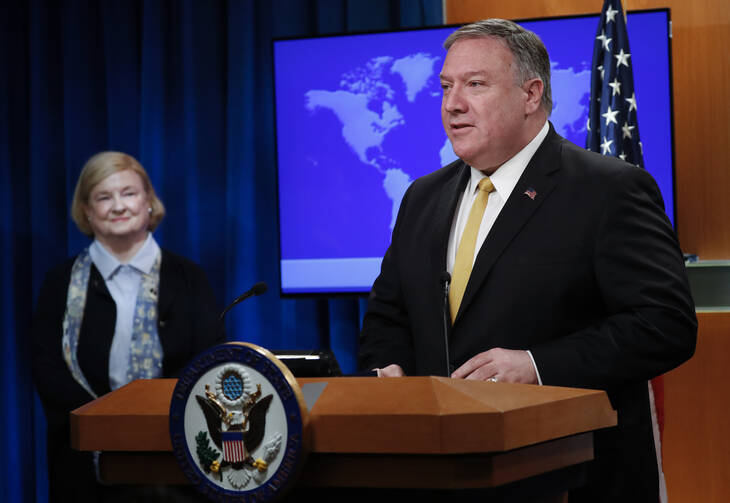 Secretary of State Mike Pompeo, right, unveils the creation of Commission on Unalienable Rights, headed by Mary Ann Glendon, left, a Harvard Law School professor and a former U.S. Ambassador to the Holy See, during an announcement at the US State Department in Washington, Monday, July 8, 2019. (AP Photo/Pablo Martinez Monsivais)

The Trump administration said Monday that it will review the role of human rights in American foreign policy, appointing a commission expected to elevate concerns about religious freedom and abortion.

Secretary of State Mike Pompeo announced the creation of the Commission on Unalienable Rights, saying the country must be “vigilant that human rights discourse not be corrupted or hijacked or used for dubious or malignant purposes.”

As human rights claims have “proliferated,” he said, nations have grown confused about what constitutes a human right and which rights should be respected and treated as valid.

“I hope that the commission will revisit the most basic of questions: What does it mean to say, or claim, that something is in fact a human right?” Pompeo said. “How do we know, or how do we determine that this—or that—is a human right. Is it true, and therefore ought it to be honored?”

He said he expected the most comprehensive review on the subject since the 1948 Universal Declaration of Human Rights, which was adopted by the United Nations and laid out global rights and freedoms.

The commission will be chaired by Harvard Law School professor Mary Ann Glendon, a former U.S. ambassador to the Vatican. A scholar and author, Professor Glendon has written about religious freedom for America.

Glendon turned down an honor from Notre Dame the year President Barack Obama was scheduled to deliver a commencement address over his support for abortion rights.

Human rights groups accused the administration of politicizing foreign policy in a way that could undermine protections for marginalized populations, including the gay, lesbian and transgender community. Democratic senators have raised concerns about the panel’s intent and composition, fearing it would consist of members who “hold views hostile to women’s rights and undermine existing human rights treaties.

Amnesty International USA said there was no reason for such a review given the decades-old protections in place.

“This administration has actively worked to deny and take away long-standing human rights protections since Trump's inauguration,” Joanne Lin, the group's national director of advocacy and government affairs, said in a statement.

“If this administration truly wanted to support people’s rights, it would use the global framework that’s already in place. Instead, it wants to undermine rights for individuals, as well as the responsibilities of governments.

A group of Democratic senators said in a letter last month that they were dismayed that the commission was being assembled without congressional oversight. Several of the names of people reported to be on it, they charged, support discriminatory policies against gays and lesbians, “hold views hostile to women’s rights, and/or to support positions at odds with U.S. treaty obligations.”

“We believe the extent to which this administration has undermined American leadership and credibility on promoting fundamental human rights is of historic proportions,” the senators wrote. “The department’s proposed Commission on Unalienable Rights must not serve as a platform to further erode U.S. leadership and undercut U.S. interests.”

Family Research Council President Tony Perkins applauded Mr. Pompeo’s announcement in a statement released on July 8, suggesting that the commission could have an important role in protecting religious freedom around the world.

“The rights to life, liberty, the pursuit of happiness, the freedoms of religion, speech, and assembly, and other principles upon which our nation was founded are not merely American rights,” Mr. Perkins said, “they are human rights that we are compelled to protect and promote for all people of all nationalities.

“The world's worst actors have used international platforms to shape policy on an issue of dignity that they neither value nor practice,” he added. “Other special interest groups have sought to expand the definition of a 'human right' to include virtually anything. If everything is a human right then the term begins to have little meaning."

Glendon, who joined Pompeo at the State Department for the announcement, said she was honored to do the job at a time when “basic human rights are being misunderstood by many, manipulated by many and ignored by the world's worst human rights violators.”

Thanks for your thoughtful comments, Tim Donovan. I agree.

Dear Ms. Talley. Thanks for your kind words. It was very considerate of you to read such a lengthy post. It's good to know that in some sense we're kindred spirits. I enjoy reading America Magazine, but I do find some of the remarks regarding many articles to be from people who dissent from authentic Church teaching on major matters. I hesitate to sound judgemental, because I certainly admit to being a very imperfect Catholic. For this reason, for the last several years, I've gone to the Sacrament of Reconciliation each month. It gives me great consolation to receive forgiveness from my compassionate pastor, Msgr. Savinsky, or his associate, Father Smith. I then feel worthy to receive Jesus, truly present in the Eucharist. My favorite Catholic newspaper is Our Sunday Visitor. Have you ever read it, Anne? It has some very interesting, informative, and well-written articles. Without being immodest, I have a,letter printed in the latest edition of Our Sunday Visitor (July 14-20). It's regarding the difficulties faced by many people in Africa, and a few possible suggested solutions. I also sent a letter to America Magazine today (July 9, 2019) regarding what I believe is the need to retain the seal of confession in the Sacrament of Reconciliation. The article is titled "The Deal of Confession and mandatory reporting: A survey of state laws" by Ellen K. Bogel (7/1/19). If you like you may be interested in my remarks. Do you frequently make posts regarding different articles or editorials? Perhaps I simply have mixed your remarks, but I hope you will post remarks about many different matters. I'm sure that your views would be interesting and informative. Thanks again for your kindness, Ms. Talley. I look forward to reading your posts. Take care. Tim Donovan