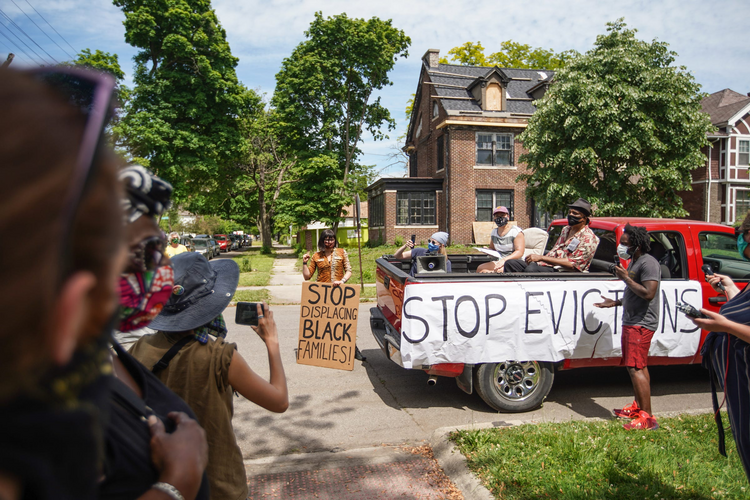 Tristan Taylor of Detroit speaks to people gathered June 9, 2020, during a caravan protest through Detroit neighborhoods while calling for relief for tenants and mortgage borrowers during the coronavirus pandemic. Catholic Charities' officials say people throughout the U.S. are at risk of eviction as the COVID-19 pandemic wreaks havoc on the economy. (CNS photo/Ryan Garza, USA Today Network via Reuters)

As Americans reckon with the continued risk of Covid-19 and record unemployment, some face another threat after weeks of stay-at-home orders and job losses: eviction. In New York State, where over 380,000 people have tested positive for coronavirus, Gov. Andrew M. Cuomo issued a statewide moratorium on evictions until August 20—an extension of his previous executive order barring evictions until June 20.

But according to Antonio Garcia, the director of eviction prevention and housing education for Catholic Charities of New York, New York tenants may be at risk of homelessness even before that August deadline.

“There is a caveat to the [August] moratorium.... It only applies to people or tenants who are facing eviction and who are eligible for unemployment insurance or benefits under state or federal law, or are facing financial hardship due to the Covid-19 pandemic,” Mr. Garcia told America. This means that in order to avoid eviction after June 20, tenants would need to prove to a court that they are currently receiving unemployment assistance or cannot pay rent due to coronavirus.

Immigrants in the United States without legal status face some of the greatest risks since they are not eligible for most government-funded programs and to request help would expose their status. In general, African-American and Latino people “are twice as likely to rent as white people, so they would be most endangered if the protection from removal is ended,” according to the news outlet Politico.

According to restrictions included in the CARES Act, the coronavirus economic relief package passed in March, tenants nationwide with federally backed mortgages cannot be evicted until August 23.

Over six million Hispanic individuals reported they had “no confidence” or “slight confidence” in their ability to make next month’s rent, in a survey conducted by the U.S. Census Bureau. Over five million black Americans reported the same fears. Affordable housing for minority communities has been among the demands of the Black Lives Matter movement.

There are testimonies of immunocompromised individuals who say they have to choose between their health and being able to pay their mortgage, which means they have to leave the security of their home to find work or to find mortgage assistance.

Fears of eviction are not unique to residents of New York City. In Texas, where the Supreme Court lifted a statewide moratorium on evictions last month and some 2.4 million people have filed for unemployment since March, evictions are now allowed with some exceptions. Steve Adler, the mayor of Austin, has halted evictions in his city until after July 25.

According to restrictions included in the CARES Act, the coronavirus economic relief package passed in March, tenants nationwide with federally backed mortgages cannot be evicted until August 23. These federal protections extend expired statewide protection to as many as a quarter-million tenants in South Florida, according to judges in three Florida counties.

While the moratorium staves off a housing crisis for many tenants, it does not cancel rent accrued over the last several months.

Mr. Garcia is concerned that most New York tenants are unaware that they may lose their housing prior to August 20 unless they meet those two key criteria. “The tenants that are most at risk are those tenants who already had a nonpayment proceeding pending in housing court before the pandemic or before the moratorium was enacted,” explained Mr. Garcia, who said that landlords can motion for a warrant of eviction in these cases after June 20. Not all court motions can be filed virtually, however, which may help at-risk tenants like undocumented immigrants, as some courts remain closed.

Mr. Garcia estimates that around 30 percent of existing eviction cases handled by Catholic Charities of New York remain unresolved. “Every year in New York City, there are over 200,000 filings of nonpayment cases. Of those 200,000...about 9 percent are actually evicted,” said Mr. Garcia, who believes that 200,000 figure could double as the pandemic and burgeoning economic crisis continue.

While the moratorium staves off a housing crisis for many tenants, it does not cancel rent accrued over the last several months. “People could be facing as many as two-and-a-half months of rent [payments],” said Mr. Garcia.

Catholic Charities, which plans to draw on federal funds from the Emergency Food and Shelter Program, is currently in negotiations with various organizations and donors to establish financial aid for tenants “who will be facing imminent eviction in a month or so.” The National Apartment Association has called on Congress to establish a national emergency rental assistance program and to include multifamily businesses under the Small Business Administration’s Paycheck Protection Program.