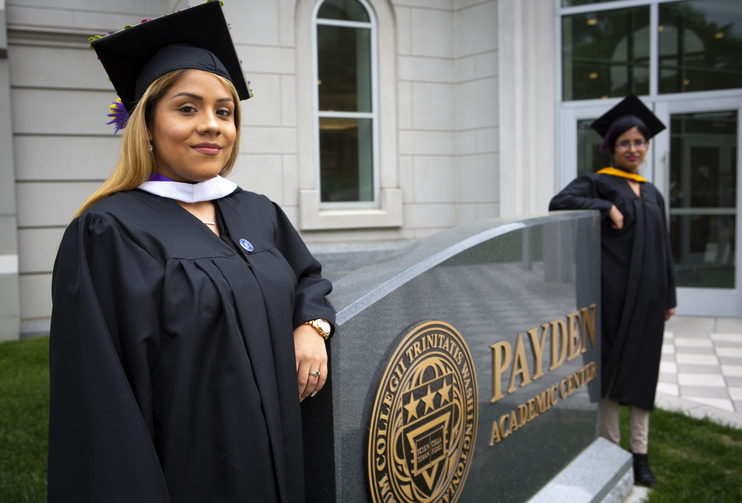 Brenda and Yarely—two “Dreamers” posing for a photo before their 2018 graduation from Trinity Washington University—consider themselves symbols of the Deferred Action for Childhood Arrivals program, which provides legal protections and work authorization to immigrants brought to the U.S. as children by their parents without legal documents. On June 18, 2020, the U.S. Supreme Court handed down a 5-4 ruling rejecting President Donald Trump's executive order to cancel DACA. (CNS photo/Chaz Muth)

Catholic leaders praised the Supreme Court on Thursday, June 18, following its decision to protect undocumented immigrants who arrived in the United States as children from deportation. The 5-4 decision was a blow to the Trump administration, which has advocated to end Deferred Action for Childhood Arrivals (DACA).

The U.S. Conference of Catholic Bishops supported the court’s decision in favor of hundreds of thousands of “Dreamers,” as DACA recipients are known. “First, to DACA youth, through today’s decision and beyond,” the bishops said in a statement issued on June 18, “we will continue to accompany you and your families. You are a vital part of our church and our community of faith. We are with you.”

The conference criticized the Trump administration for its attempts to end DACA. “In times of uncertainty, let us remember the teachings of the Gospel which encourage us to be open and receptive to those in need: ‘If someone who has worldly means sees a brother in need and refuses him compassion, how can the love of God remain in him?’ (1 John 3:17),” the bishops wrote. “In this moment, we must show compassion and mercy for the vulnerable.” The conference also made a plea to U.S. senators to provide “a path to citizenship” for DACA recipients.

U.S. bishops: “To DACA youth, through today’s decision and beyond, we will continue to accompany you and your families. You are a vital part of our church and our community of faith. We are with you.”

Ashley Feasley, director of migration policy and public affairs at the U.S.C.C.B., said the decision was “a very welcome surprise.” But added that the Trump administration could still end the program.

“Now is the moment to pursue meaningful legislation,” she told America. “The Senate really needs to act on this issue. We don’t want to get back to another court battle.”

Ms. Feasley noted that many Dreamers are college graduates and contribute to a number of service industries. With respect to the pandemic, she pointed out that more than 62,000 Dreamers work in the healthcare industry and more than 70,000 work in food distribution.

Dylan Corbett, the executive director of the Hope Border Institute, called the president’s various attempts to repeal DACA “arbitrary and capricious,” adding that the court’s recent ruling is reason for encouragement.

“Today’s victory belongs to the countless Dreamers who refused to be silenced and forced into the shadows. At a time when our politics seems broken and hijacked, they give us hope that an engaged public that brings its pain and hopes to the streets and to the halls of power can still make change,” wrote Mr. Corbett.

Like the U.S.C.C.B., Mr. Corbett also called on Congress to take action to support Dreamers. “We still need Congress to act. Pass the Dream Act, cut funding to ICE and CBP, tear down walls, set free the detained and restore asylum. The fate of our families and friends is not a question of politics but the work of justice. And this is holy work, moral work,” he wrote.

Dylan Corbett, Hope Border Institute: “Today’s victory belongs to the countless Dreamers who refused to be silenced and forced into the shadows.”

“As a DACA recipient, tonight I will be able to sleep soundly knowing that we will continue to be protected from deportation and able to work and study in the U.S.,” said José Arnulfo Cabrera, director of education and advocacy for migration at the Ignatian Solidarity Network. “But this doesn’t mean that the fight is over. We must remember that DACA was created as a temporary protection for undocumented youth. We must continue to work for a pathway to citizenship for DACA recipients, undocumented youth, and our undocumented families, and begin to fix our broken immigration system.”

The Association of Catholic Colleges and Universities, whose members have historically defended undocummented students, reiterated its support of that community. “The Catholic higher education community stands committed to the individuals in the DACA program who are enrolled at our colleges and universities. We pray that today’s decision means they will be able to continue their studies without interruption and that, one day soon, others in their situation will be encouraged to pursue their education goals,” said the A.C.C.U. Thursday in a press statement.

From the American Friends Service Committee, Itzel Hernandez, a DACA recipient, said: “In the face of a global health crisis and ongoing uprising against police brutality and systemic racism brought on by white supremacy, the protections that DACA offers Black and Brown undocumented youth is needed now more than ever.

“As we celebrate this hard-fought victory, we stand in solidarity with Black organizers whose actions and commitment to justice contributed to this win.”

Madeleine Munday, R.G.S., the province leader for the Sisters of the Good Shepherd in mid-North America, said that the court’s decision has unitive potential. “We all hope that these young people and their families know how much they are appreciated and welcomed by the vast majority of people living in this country. More now than ever, we hope that everyone sees one another as a member of the human family,” Sister Munday said.

The National Advocacy Center for the Sisters of the Good Shepherd made a similar appeal for all immigrants. “Congress should take advantage of this decision and this unprecedented time to join together and demonstrate unity for all of America. Congress should pass new immigration reform welcoming more immigrants and asylum seekers and adding to the vibrancy of America,” said Lawrence E. Couch, the center’s director.

Show Comments ()
Join the conversation: Login or create an account
Before you can comment, you need to update your profile to include your first and last name, as required in our comments policy. Then reload this page and you'll be set up for commenting. Update your profile
More: Immigration / US Church / US Politics