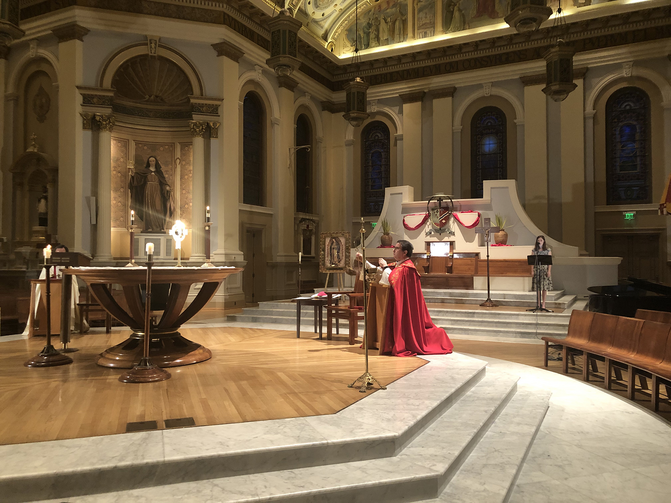 It is not uncommon to see a Tesla or a Lexus among the cars in line for food donations at parishes in the Diocese of San Jose, Calif., according to the Rev. Jon G. Pedigo, director for advocacy and community engagement of Catholic Charities of Santa Clara County.

Catholic Charities is coordinating weekly food “Drive Thrus” to address needs during the Covid-19 pandemic. Together with parish chapters of the St. Vincent de Paul Society, they sometimes feed as many as 1,000 families in 90 minutes, Father Pedigo told America. The collaboration with parishes reaches 50,000 people every week.

“What we’re helping to do is set up an infrastructure,” he said, noting volunteers register those who come for follow up calls. Catholic Charities is pivoting from relief to recovery.

The goal is to move from the food program to person-to-person care, and Catholic Charities bands together with other nonprofit agencies to offer comprehensive service. They are piloting a program at Our Lady of Refuge to bring together accompaniment teams that serve clients for 120 days, helping them navigate available resources. The program brings parishioners from wealthy and low-income parishes together.

“Once you are at the table with a fellow person of faith and you have the encuentro, there’s a mutual transformation,” Father Pedigo said of the encounter. “We’re creating a network of people to see each other. We’re never going to go back to the same siloed lives we had before. The questions and conversations will be different.”

Santa Clara County is in California’s Bay Area, which has the highest income inequality in the state. Billionaires live next to the poor in Silicon Valley. “Shelter in place has caused an even greater disparity,” Father Pedigo said.

Some families share apartments with more than 12 to 20 people living together, meaning “they don’t have a safe place to shelter in place."

While California put in place a moratorium on rent, many families had been living paycheck to paycheck before that pandemic and will be unable to pay back rent once it comes due, he said. Some families share apartments with more than 12 to 20 people living together, meaning “they don’t have a safe place to shelter in place,” he said.

Recently, Bridget Balajadia, project manager with Catholic Charities, met a man who rents a corner of a shed for $200 a month. The man, who is over 65, shares the shed with three other men. The state moratorium on rent does not protect people in his situation.

“I just need a job,” the man, an immigrant from Vietnam, told Ms. Balajadia. He had worked in factories all his life. “There are so many people that we aren’t even aware of,” she said.

Catholic Charities clients are struggling with fatigue, increased anxiety, financial trouble and childcare, Ms. Balajadia said. Some parents are no longer able to work because their children are home.

Suicide rates have also increased during shelter in place, she said. In Walnut Creek, doctors are reporting more suicides than Covid-19 deaths. Santa Clara County has also seen an increase in fentanyl overdoses during the pandemic.

"The disparity is going to get even bleaker.”

While some in Silicon Valley ruminate about working from home going forward, Ms. Balajadia said low-income workers in supportive industries would suffer for it. “All of those people won’t have jobs to return to if people stay remote,” she said. “The disparity is going to get even bleaker.”

Rental assistance is another great need, Father Hendrickson said. “Once the moratorium on evictions is lifted, it’s going to be really bad,” he said.

“If you can’t work from home, it’s so much worse,” he said, explaining that many of his parishioners work in service, food processing and retail industries. “My parishioners have been badly hurt. It’s frustrating as a priest to have this situation and you can only do so much.”

Father Hendrickson said he has been overseeing fewer funerals, though he is not sure why. “Anointing of the sick is way down,” he said. “It’s nearly impossible to anoint someone with Covid-19.”

The financial impact of the pandemic led the Diocese of San Jose to reduce operating expenses.

There are about 20,000 Catholics in his parish, most of them from Latin American backgrounds. His youth minister, Carlos Barba, hosts weekly Facebook Live events in English and Spanish. Every weekend, Father Hendrickson celebrates an English and a Spanish-language Mass, which are both live-streamed. The parish also streams daily Masses, which alternate between English and Spanish each day.

“Live stream can’t replace the priest and assembly worshipping together and receiving the Eucharist,” he said. “We’re a community church with many multi-generational families. We’re looking forward to reopening.”

The financial impact of the pandemic led the Diocese of San Jose to reduce operating expenses, including voluntary retirements, reduced hours and layoffs, though a spokesperson would not say how many people were affected. But, at least for the time being, there are no plans to close any of the 26 elementary schools or six high schools.

Access to online education has been an ongoing concern in some families, Ms. Sliney said. Some students do their homework, including essays, on their phones.

“We of course want our kids back to school, but we have to do that safely."

“It’s a balance for families and teachers,” she said. “Half of it is getting the technology and half is walking with the parents at home.”

Some parents have to figure out how to schedule video conferences for themselves as well as a number of children.

“It was very much a testament to our team and to the kids regarding what we preach—that we are always learning and growing and supporting each other in what we do,” Ms. Sliney said. “It’s always what we do in Catholic schools, but we’ve done it more now.”

Educators strive to build relationships with both students and parents, she said. Those relationships were crucial for remote learning. “We were able to be successful because of the network we had already established,” Ms. Sliney said.

“We of course want our kids back to school, but we have to do that safely,” she said. The last day of class is June 4 and schools are already preparing for both online and in-person classes next fall.

“Our goal is to stay as creative and innovative as possible and be there for what our kids need,” Ms. Sliney said. “As much as it has been challenging, the spirit of community has been really beautiful.”

Correction, June 11, 2020: An earlier version of this story incorrectly identified the Rev. Jon Pedigo as executive director of Catholic Charities in Santa Clara County. He is the director for advocacy and community engagement.

This article also appeared in print, under the headline “In San Jose, the church recovers from Covid-19,” in the July 2020, issue.