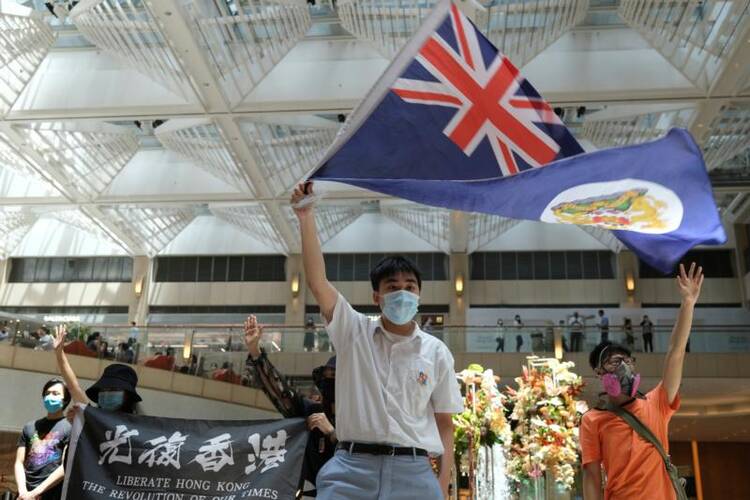 In a letter to Dominic Raab, the British foreign secretary, the bishop said Britain still had a responsibility to the people of its former colony and "a clear legal, moral and historical duty to safeguard fundamental freedoms" there.

Speaking on behalf of the bishops of England and Wales, he said: "Like so many others in the Catholic community I am deeply concerned by the continuing erosion of autonomy, suppression of political freedoms, and violent response to peaceful protests taking place in breach of this treaty."

Failure to act "at this critical time," said Bishop Lang, "will not only have devastating consequences for more than 7 million people living there but is also likely to have dangerous repercussions for human rights and international law more broadly."

The bishop, who chairs the department of international affairs of the Bishops' Conference of England and Wales, said: "It is therefore imperative that the U.K. government stands in solidarity with the people of Hong Kong by going beyond rhetorical interventions and urgently using all available diplomatic means to protect them from the serious violations of their human dignity that we are now witnessing."

The joint declaration was signed by the U.K. and China in 1985 to pave the way for Hong Kong to be handed back to China in 1997.

It established the principle of "one country, two systems," under which China agreed not to impose its system of communist government on Hong Kong for 50 years.

In the past decade, however, China has indicated that it believes the agreement has no binding force and has interfered increasingly in the political life of Hong Kong, triggering protests in support of local democracy.

In late May, China reacted by legislating to prevent sedition, terrorism, secession and foreign interference in Hong Kong and to station mainland security and intelligence services in the city for the first time.

In a June 2 statement in the House of Parliament in London, Raab implored the Chinese government "to step back from the brink and respect Hong Kong's autonomy and respect China's own international obligations."

If China refused to change direction, he said, a path to British citizenship could open for some 300,000 British National Overseas passport holders in Hong Kong, with 3 million others also possibly eligible.