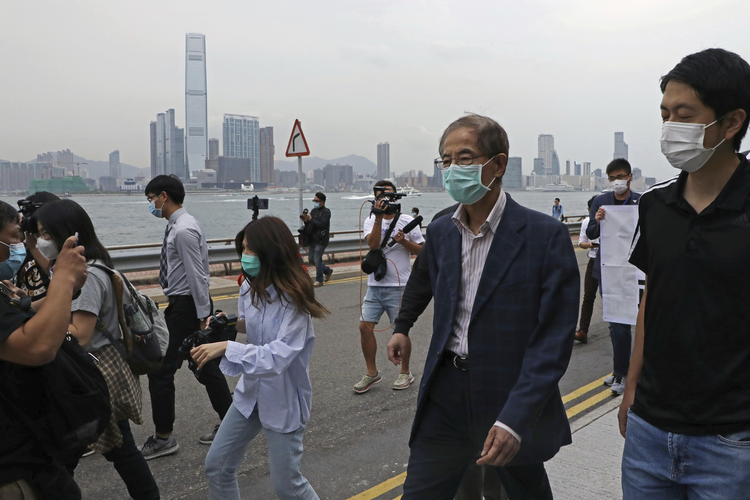 China’s hardline maneuvering over Hong Kong in mid-April—a stern order for national security legislation, a declaration asserting the legitimacy of its involvement in local politics and the mass arrests of senior pro-democracy figures—signals a bumpy political future for the semi-autonomous city, analysts say.

The mass protests that had roiled Hong Kong since June 2019, now largely subsided because of the Covid-19 pandemic, are likely to return, they warn, because of recent gestures by Beijing to tighten control over the former British colony.

On April 18, Hong Kong police arrested 15 prominent pro-democracy activists, including senior barrister Martin Lee, 81, the founder of the Democratic Party, and the media tycoon Jimmy Lai, 71, both Catholics. They were accused of organizing or taking part in unapproved protests last year and arrested on charges of illegal assembly. The democracy activists were all released on bail the same day but must return to court on May 18.

The Justice and Peace Commission of the Catholic Diocese of Hong Kong condemned the mass arrest of the pro-democracy activists last Saturday as “political persecution” and urged the authorities to respect people’s freedom of assembly. It also urged the police to return the activists’ mobile phones to safeguard their privacy.

The mass protests that had roiled Hong Kong since June 2019, now largely subsided because of the Covid-19 pandemic, are likely to return, many warn, because of recent gestures by Beijing to tighten control over the former British colony.

Martin Lee, often labeled “the Father of Democracy” in Hong Kong, fears that fresh confrontations between the authorities and protesters will lead to violent crackdowns and deaths. Mr. Lee, once trusted by Beijing as one of the drafters of the Basic Law, said the Joint Declaration signed by Britain and China in 1984—a legally binding treaty registered with the United Nations—and the Basic Law were designed to boost confidence in Hong Kong and to stem talent and capital flight before the handover in 1997.

China’s liaison office in Hong Kong declared the night before the arrests that the mainland government was not bound by a clause in the city’s mini-constitution, the Basic Law, that bars the Chinese government from interfering in local affairs. The office asserted that it and the Hong Kong and Macau Affairs Office—China’s top administrative bodies overseeing the city’s affairs—were “authorized by the central authorities to handle Hong Kong affairs.” In the same week, the new head of the liaison office, Luo Huining, also urged Hong Kong to enact controversial national security legislation that would outlaw “sedition, subversion and the theft of state secrets.”

The 1984 Sino-British Joint Declaration promised to grant Hong Kong “a high degree of autonomy” under the “one country, two systems” principle for at least 50 years after China resumed sovereignty in 1997. The China liaison office declares now, however, that “a high degree of autonomy is not complete autonomy” and asserts that Hong Kong’s right to self-rule is dependent on authorization from the central government in Beijing.

“There is nothing inevitable about the future because Hong Kong is not like the rest of China, and Beijing is far from being omnipotent in Hong Kong.”

An economic slump sparked by the Covid-19 pandemic and increasing tensions with the United States have raised China’s sensitivity to presumed security threats. China has been growing impatient to bring Hong Kong under the umbrella of its national security system and has been pressing the city’s government to pass the controversial Article 23 legislation, which was shelved in 2003 after mass protests that year.

“I see a calculation in Beijing that this is now the perfect time to take a hard line on Hong Kong and get it subdued when the Western democracies are too preoccupied with Covid-19,” said Steve Tsang, the director of the University of London’s SOAS China Institute.

In a policy white paper released in June 2014, China asserted that it had “comprehensive jurisdiction” over Hong Kong and two months later, ruled that it would only grant “universal suffrage” as long as it could first vet the leadership candidates. In the communique of a key Communist Party meeting in November last year, the fourth plenum, Beijing stressed “comprehensive jurisdiction” over Hong Kong again and told the city to “perfect” its legal system to safeguard national security.

Analysts believe that China will tighten its control of Hong Kong in the next few months and will likely push the city to pass the Article 23 law before the September legislative election, as authorities fear widespread dissatisfaction with the government may result in the democrats winning a majority.

“As [China’s representative] offices are accountable to no one in Hong Kong, we could only expect the governance to become more secretive and erratic,” said Kenneth Chan, a political scientist at the Hong Kong Baptist University.

Beijing leaders may believe any possible economic impact in Hong Kong would be “a price China can pay” for the sake of bringing the former British colony more completely under its control.

He said laws legislated under Article 23 would “give the authorities new powers to persecute and purge the pro-democracy leaders and activists before the election in September.”

Hong Kong remains a gateway for Western capital to reach the mainland market—it is the home to the largest number of initial public offerings by Chinese firms and remains the largest offshore center for bond sales by Chinese companies—but China does not appear to be concerned about undermining investor confidence.

China’s dependency on Hong Kong has lessened markedly over the past three decades. Hong Kong’s G.D.P. matched about a third of China G.D.P. in the 1980s but after the nation’s rapid economic transformation now represents less than 3 percent, said Mr. Tsang. Beijing leaders may believe any possible economic impact in Hong Kong would be “a price China can pay” for the sake of bringing the former British colony more completely under its control, Mr. Tsang said.

“Hong Kong contributes much more to China” than economic statistics in news headlines might suggest, said Mr. Tsang. “But does Xi Jinping understand and appreciate that?”

China’s interventions could badly hurt Hong Kong’s economy and dampen investor confidence, Mr. Chan warned. “It is foolhardy to suggest Hong Kong’s trade, economic and financial status will emerge unscathed from Beijing’s blatant interventions,” he said. Efforts to tighten control over Hong Kong will also “de-internationalize” the city, transforming this global financial hub into a city more like the controlled and surveilled urban centers on the mainland.

But he also warned that China’s plan may backfire. Many ordinary Hong Kong people are saying they would protest again if the anti-subversion legislation goes ahead, reviving the months-long anti-government movement.

“There is nothing inevitable about the future because Hong Kong is not like the rest of China, and Beijing is far from being omnipotent in Hong Kong, not to mention in the world,” Mr. Chan said.

Since social distancing measures were introduced in the territory to curb the spread of the coronavirus at the end of March—among them, a ban on gatherings of more than four people and the shutdown of nonessential businesses and entertainment venues—a perhaps deceptive calm has descended over the city. But despite the restrictions, the pro-democracy Confederation of Trade Unions plans to proceed with its annual May Day march in what could prove a flashpoint even before the emergency restrictions are due to expire on May 7. The group’s secretary general, Lee Cheuk-yan, among those arrested on April 18, insists the march can be held while observing social distancing protocols. Police have threatened prosecution if the march is held.

Speaking to reporters after his release on bail on April 19, Mr. Lee said that his arrest made him “feel proud to walk the road of democracy with the outstanding youths in Hong Kong” after seeing thousands arrested in the anti-government movement. He insisted, however, that peaceful resistance was the only acceptable way ahead.

Mr. Lee said he “would not give up” on his fight for democracy.

“This has strengthened my will,” he said.

Verna Yu
Show Comments ()
Join the conversation: Login or create an account
Before you can comment, you need to update your profile to include your first and last name, as required in our comments policy. Then reload this page and you'll be set up for commenting. Update your profile