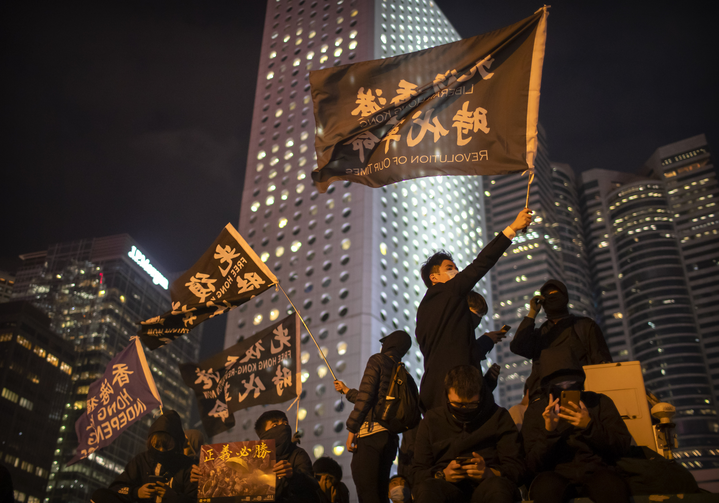 A protestor holds a flag that reads: "Liberate Hong Kong, Revolution of Our Times" at a rally in Hong Kong on Dec. 12. Protesters wrote hundreds of Christmas cards for detainees jailed during the city's pro-democracy movement. (AP Photo/Mark Schiefelbein)

“It is time Hong Kong’s churches rid themselves of poison,” said the narrator in a video released recently by the Chinese state media, as the city’s activist Christian community becomes the latest target of official opprobrium.

Hong Kong’s ongoing unrest, sparked in early June by a controversial extradition law, since withdrawn, shows no sign of abating. Over the last six months, the movement has morphed from peaceful protests into often violent clashes between thousands of protesters and Hong Kong police.

Police have so far arrested more than 6,000 people and fired more than 16,000 rounds of tear gas, 10,000 rubber bullets and even live rounds in efforts to suppress the demonstrations, and some demonstrators have thrown Molotov cocktails and bricks at security forces. These protesters say that the refusal of Hong Kong authorities to meet their demands—which include democratic elections for the city’s executive leader and legislature and an independent investigation of police brutality—has forced them to resort to violence.

Officials in mainland China have long linked Christian churches and nongovernmental organizations to foreign influence, and they remain wary of any possibility of “color revolution,” a term that refers to a number of movements that developed in several countries of the former Soviet Union and in the Balkans during the early 2000s, fomenting regime change. In recent weeks, the Chinese government has intensified rhetoric against Christian churches in Hong Kong, portraying them as part of the “foreign hostile forces” that seek to create political unrest aimed at bringing down China’s one-party rule.

The Chinese government has intensified rhetoric against Christian churches in Hong Kong, portraying them as part of the “foreign hostile forces” that seek to create political unrest aimed at bringing down China’s one-party rule.

Christian churches and many Christian clergy have tried to play a mediating role since the start of the crisis, but their criticism of police brutality during the demonstrations and violations of human rights has provoked the Chinese government’s wrath.

Joseph Ha Chi-shing, the auxiliary bishop of Hong Kong’s Catholic Church, in late October asked participants at a prayer meeting to remain peaceful as they demonstrated for democracy. “Many people think because our opponents provoke us and don’t respond to us, we can harbor hatred and anger,” he said. But Hong Kong’s Christians, even in resistance, “are also responsible” to remain nonviolent, Bishop Ha said.

“Opening churches to the ‘rioters’ is to shield them. To sympathize with protesters is to condone violence. Even the joint statements made by students and alumni [from Christian schools] are criticized as meddling by the church.”

“The party sees the universality and supranationality of Christianity as a threat to the ideological supremacy of the ruling elites,” he said. “They see all this in terms of political struggles over people’s spiritual yearnings.”

After the crackdown of the Tiananmen Square movement in 1989, the Chinese Communist Party concluded that Christianity and Christian churches played a part in the fall of Communist regimes in Eastern Europe. It views the Christian faith as an agent of imperialism, he said.

Professor Ying Fuk Tsang, the director of the divinity school at the Chinese University of Hong Kong and one of the three Christian figures singled out in the official video, said that Chinese authorities have in recent years stepped up their rhetoric on religion as a destabilizing force in Chinese society. But he stressed that the Communist Party’s criticism of Christianity has always been in the form of political struggle, from the accusation of “imperialism” to “infiltration” to “color revolution.”

“The Chinese government resorts to [blaming] external forces and they link Christian participation to the Western manipulation,” Mr. Ying said, citing as one example the Chinese authorities’ view that the American Central Intelligence Agency is inciting unrest across the world. “Religious infiltration is synonymous with ‘color revolution’ in their eyes.”

“So opening churches to the ‘rioters’ is to shield them. To sympathize with protesters is to condone violence. Even the joint statements made by students and alumni [from Christian schools] are criticized as meddling by the church,” Mr. Ying said. “Anyone who supports democracy and freedom would be seen as threatening its authority and would be criticized for their links with Christianity.”

Naming outspoken Christian clergy members and scholars, including Cardinal Joseph Zen, bishop emeritus of Hong Kong, as the key culprits, the narrator in the video released by state media said Catholic and Protestant churches were guilty of “inciting” and abetting anti-government “riots.” The video cites prayer meetings, joint ecumenical statements that condemn police brutality and even hospitality toward protesters as “evidence” of the churches’ alleged plan to subvert Hong Kong.

Naming outspoken Christian clergy members, including Cardinal Joseph Zen, as the key culprits, the narrator in the video released by state media said Catholic and Protestant churches were guilty of “inciting” and abetting anti-government “riots.”

Many churches have opened their doors to protesters during demonstrations, allowing them to seek refuge and rest. This too has been cast by the state media as evidence of churches plotting anti-government activities.

Churches also have a long history of providing education and social services in Hong Kong and still play a key role in its civil society. According to official statistics, an estimated 12 percent of Hong Kong’s population, or 889,000, are Christians; the 389,000 Catholics represent about 5 percent of the population. Many schools, colleges and civil or social service organizations are run by churches. Catholic and Protestant schools constitute around 70 percent of Hong Kong’s government-administered or subsidized schools.

Hong Kong churches have borne the brunt of much of the Chinese authorities’ anger at the refusal of Hong Kong’s young people to accept its rule. Some 40 percent of the people arrested so far in the movement have been students, Hong Kong police officials report. The Chinese government views Christianity as a heretical influence on Hong Kong society, even though the majority have not been outspoken on the current crisis and political issues. The video release accuses the churches of using Christian schools as a platform to advocate anti-government thoughts and allowing students to take part in class strikes.

The singing of the hymn, “Sing Hallelujah to the Lord,” was a regular component of the first weeks of the anti-government demonstrations. It was often sung also during tense standoffs between protesters and police as Christian pastors and Catholic priests prayed with hundreds of protesters. After the police banned rallies and demonstrations in recent weeks, protesters resorted to calling their rallies Christian assemblies. Those meetings do not require police permission.

Reverend Youngman Chan, who has acted as a peacemaker between police and protesters during numerous confrontations, said that while some Hong Kong churches feel they have a moral responsibility to speak up against injustice, the Communist Party has a totally different idea about what churches should be allowed to do and believes it has the power to curb their activities.

He believes the current crisis presents unprecedented challenges for Christian churches. While many Hong Kong Christians believe they have a legitimate role to play in civic and political life, other Christians here view politics as “unspiritual and heretical,” arguing that “everyone must submit himself to the governing authorities” (Romans 13:1).

“It’s a double-edged sword,” Mr. Chan said. “[The crisis] is a purging process that makes us purer, stronger and wiser, but it’s also an opportunity for some to get in with the ‘right’ side [of the government].”

“When the Communist Party has become so strong and so close to us,” Christians have to “wake up and ask questions,” he said. “Are we going to continue [being comfortable and subordinate], or are we waking up to core Christian values, to be the salt and light of the world?”

“Martyrdom and persecution have always been the Christian church’s heritage. Jesus said, ‘Take up the cross to follow me,’” Mr. Chan added. “We can’t ask to be exempted.”

Both men believe that the Chinese government’s forceful message will intimidate many churches into closing their facilities to protesters, and in the long run, the government may punish outspoken churches by making it difficult for them to apply for land and other resources for their school plans and other services.

“This attack would lead to internal conflicts in churches because many are already [political] conservatives,” Mr. Ying said. The Communist Party will also start a fresh round of “United Front” work, he said, referring to China’s official efforts to co-opt sources of potential opposition to the party, such as churches and political parties,“to get those who could be brought round to their side and isolate those who are disobedient.”

Verna Yu
Show Comments ()
Join the conversation: Login or create an account
Before you can comment, you need to update your profile to include your first and last name, as required in our comments policy. Then reload this page and you'll be set up for commenting. Update your profile
Show Comments ()
Comments are automatically closed two weeks after an article's initial publication. See our comments policy for more.